Signup to recieve an email update when new articles come out.
InfoBarrel is a writing platform for non-fiction, reference-based, informative content. Opinions expressed by InfoBarrel writers are their own.
InfoBarrel > Technology > Mobile > Cell Phones

Working retail in the electronic department I got presented with a lot of different questions on all sorts of electronic devices.  At one point someone called the store about a TV they bought and hooked up that wasn't working.  After spending 20 minutes on the phone asking questions while getting strange looks from my supervisor I asked if the television was plugged in. It wasn't.  The sad part this wasn't an isolated case of stupid.  Heck I even had someone bring a working TV back because they could get the TV stand screwed in.  5 minutes later he walked out with all 4 screws in place.  By the way, yelling never works, even if you think it does, and only makes the person on the other end want to pass you off not really addressing the problem. Stay tuned for an article that explains how to get better customer service when you have an issue, but I digress.

The hottest electronics are currently smartphones and composed about 75% of the questions asked.  Most of the time people came in not knowing what they wanted or just wanting advice.  After talking with them to see what there needs where I was better able to address them.  The below items where most recommended by all the employees I worked with in the electronic department.  I should note that we didn't receive any kind commission on any items sold. We didn't make more by up selling or pushing specific items.  They really are the best bang for your buck.  Even though the cases are for the iPhone you will find them for the more popular phones.  If you are wondering  what to do with your old iPhone, Winter Wolf wrote a really good piece on it. 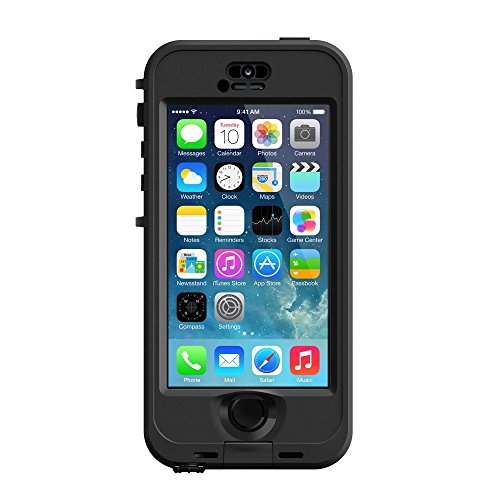 Lifeproof iPhone 5s - Nuud Series - Black/Smoke Amazon Price: $89.99 $57.96 Buy Now(price as of May 16, 2015)
The Lifeproof case is one of the most popular cases on the market currently and the best bang for your buck you can get for your phone. It is an incredibly good case for anyone active or worried about damaging there phone. If you work outside, just like being in the great outdoors, or just want a case that protects from all elements then this is the case you've been looking for. The Lifeproof nuud case boasts water resistance up to 6 feet and shock up to 6 feet. Plus it protects against dirt, mud and snow. Meaning no matter what you drop your phone in it's protected. Of course there are more rugged cases out there that protect phones even better. They make cases that are specifically for being out on the water in case you are sailing or own a 200 foot yacht. If you do own that yacht let me know; my family could use a long relaxing vacation. Unfortunately those cases are going to cost you more money and the average person isn't in need of that kind of protection.

OtterBox Defender Series iPhone 6 Case, Frustration Free Packaging, Black Amazon Price: $49.95 $36.68 Buy Now(price as of May 16, 2015)
The OtterBox is another really good case for your iPhone that is cheaper than the Lifeproof case. OtterBox Defender Series are created using multiple layers and a built-in screen protector that deflects the shock when dropped and prevents scratching your screen. This is the second most popular case asked about and bought at the retail store I worked at. Marketing is all about branding, making your name stand out among the rest. When it comes to marketing there is nothing more powerful than social recognition of your brand. There isn't a marketing campaign more powerful than people talking about it on social networks. When shopping are you going to trust your friend who you know and trust or the local sales rep? The Otterbox has that reputation and for good reason. The Defender is a very good case that protects your phone. So if you aren't worried about water then this is cheaper option then the Lifeproof case.

Advice from an expert

When looking for a case don't be enticed by the cheaper cases made from plastic.  There is a reason those cases are cheap. They don't protect your phone from anything more than scratches.  If you happen to drop your phone "protected" by a cheaper case you run the risk of the case cracking and your phone chipping, getting scratched or even ruined.  People have come in thinking their phone was protected and yet their screens shattered.  I had a cheaper case for my first smart phone.  A time came where I needed to use the warranty because of electrical malfunction.  They wouldn't take the phone because my case rubbed up against it creating scratches and marks on the phone.  Never again did I buy a $10 case with a picture of Darth Vader, don't judge, just to save some money. 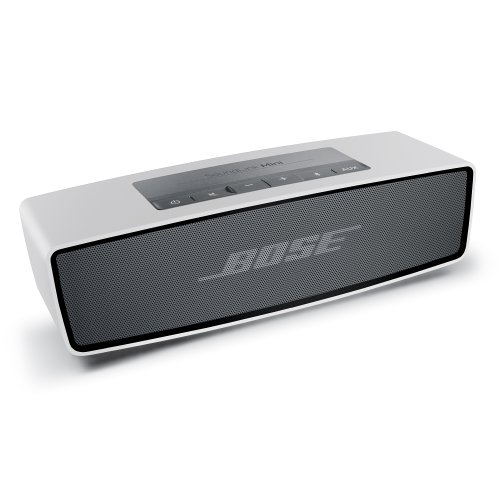 Bose SoundLink Mini Bluetooth Speaker Amazon Price: $199.00 $179.00 Buy Now(price as of May 16, 2015)
Room filling sound, deep bass, perfect treble and sweet sounding highs. There isn't a brand that does personal audio as well as Bose for as long Bose. Yes, they are better the Beats but not as popular. Bose products makes Beats sound tinning and cheap. To say the SoundLink Mini sounds awesome is an understatement. You might not have heard but music is really popular right now. Once you hear your music with this speaker you won't want to listen any other way. Honestly I can't even begin to describe and explain how awesome this speaker is. The only way to really understand is go visit a store, find the personal audio section and listen for yourself. It's perfect for the office, working in the kitchen, throwing a pool party or the home gym. Actually its perfect for any reason you can think of for portable music.

The JAMBOX was one of the most popular Bluetooth speakers people bought outside Beats Pill. Honestly they sound better than Beats and are cheaper. If you don't want to splurge on the Bose speaker but are looking for good sound quality then you want to look at this speaker. The recommended price is only $20 then the Bose but you can find the JAMBOX for cheaper than that online and in stores.

Advice from an expert

So you don't necessarily need a rugged battery backup for your phone but still want one to keep in your car, at work or just for the unknown. Well the Maxboost is awesome for those exact reasons and it's cheaper than the New Trent PowerPak. This particular model is able to charge most phones and tablets an extra three times. No more needing to find an outlet at the airport, just plug your phone in when the better gets low, let it charge and you know have a charged phone. Most of the time people came into my store looking at the non-rugged batter backups because they planned to use their tablets for a business meeting. 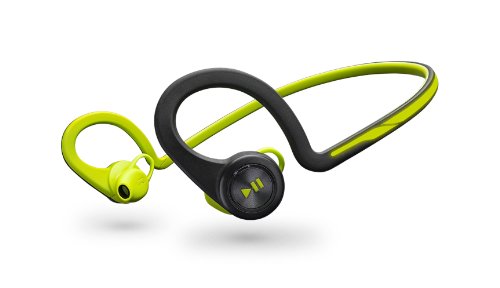 Plantronics BackBeat Fit Bluetooth Headphones - Green Amazon Price: $129.99 $89.00 Buy Now(price as of May 16, 2015)
Have have ever exercised with wired ear buds? I know while exercising my ear buds wire will either get caught and pull the ear buds out of my ear or unplug it from my phone. With the Plantronics Bluetooth ear 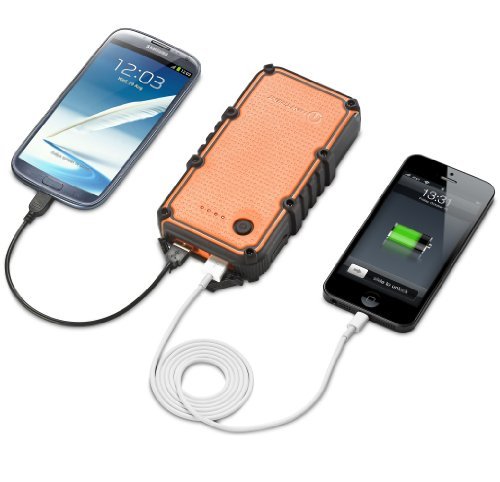 New Trent PowerPak Ultra 14000mAh Portable Dual USB Port External Battery Charger/Power Pack for Smartphones, Tablets and more. (Orange/Black) Amazon Price: $114.99 Buy Now(price as of May 16, 2015)
Battery backup chargers are in my humble opinion one of the most important accessories you can get. Planning on a vacation? Do you work outside on construction sites? Do you go hunting, camping or really anything outdoors? Then a backup power supply is really important. The New Trent rugged battery backup gives you 55+ hours of video playback which is awesome. You could watch the extend Lord of the Rings movies 4 times over and still have time left to make a call. In most cases you are buying these in case of an emergency. Well like the Lifeproof case it is water, dirt and shock proof, which you should have pickup on by reading the name. The only problem, it isn't zombie proof. But after using it to charge your phone it could be thrown at a zombie. If you do plan on being away from a power source for a while then I highly recommend this backup. Most of the time people came into the store looking for one of these for one of two reasons. One, their car broke and their phone was dead thus requiring them to walk or flag down someone or they planned on being away from a power source. 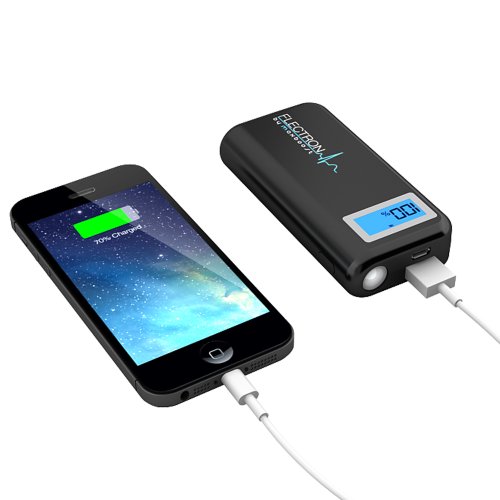