Remembering Sacrifice: Wilfred Owen and the Poetry of World War One

The First World War has been called the first modern war. It was a deadly combination of traditional hand-to-hand fighting and the technology and tactics of modern warfare. It was the first war to employ submarines and tanks, the first in which planes bombed cities populated with civilians, and the first in which chemical weapons were used1. In the course of the war, an estimated 12 million people were killed, including civilians as well as fighting men, and 20 million were severely wounded. It is a sad commentary on the extent of war injuries that, because so many soldiers lost limbs, the production of prosthetic limbs became a growth industry.

The outpouring of grief at the end of the war resulted in the construction of war memorials and the first November 11 commemoration of Remembrance Day or Armistice Day in the United Kingdom and throughout the Commonwealth2.

World War One also inspired a generation of poets. These were no Romantic poets writing odes to larks and daffodils. These were battle hardened men such as Rupert Brooke, Edward Thomas and Siegfried Sassoon who used their personal experience to write about the horrors of battle.

The greatest of these World War One poets is Wilfred Owen.

Born in 1983 in Shropshire, Owen was a budding poet who worked as a language tutor in France from 1913 to 1915 before volunteering to fight with the Second Manchester Regiment. He was subjected to long route marches through mud and water-filled trenches and sleeping outside in ice and snow in the middle of winter.

Credit: By Royal Engineers No 1 Printing Company. - This is photograph Q 1 from the collections of the Imperial War Museums (collection no. 1900-02), Public Domain, https://commons.wikimedia.org/w/index.php?curid=511694

He experienced gas attacks and was overwhelmed by the stench of rotting corpses. He became a platoon commander, but was subsequently hospitalized for concussion and shell-shock after being blown up. While he was in hospital he met Siegfried Sassoon, who encouraged him to use his poetic gift to write about the war. After recovering, he returned to the front in a suicidal frame of mind, suspecting that he would not live to see the end of the war. He won the Military Cross for his bravery but, as he foresaw, he was killed near the French village of Ors on November 4, 1918, just seven days before the signing of the peace treaty3.

Owen's better known poems include the tragically beautiful sonnet Anthem for Doomed Youth, which asks who will mourn or pay tribute to “these who die as cattle” except for the continuing shrieks and explosions of battle and "the shrill demented choirs of wailing shells"4. You can listen to a passionate reading of this poem by Sean Bean in the video below. 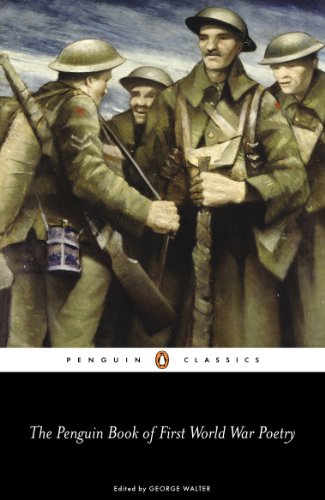 Owen was drawn into the war by government recruitment propaganda.3  He began with heroic ideals but was quickly disillusioned by his experiences on the battlefield. Consequently, war propaganda becomes a target of criticism in some of his poetry.

Smile, Smile, Smile, written in September, 1918, less than a month before he was killed, is Owen’s reaction to a contemporary British newspaper photograph entitled “Happy,” which depicted three wounded but smiling soldiers. It was also inspired by French Prime Minister Clemenceau’s decision to reject an Austrian peace offer because he believed it would be a betrayal of the fighting troops,

The title of the poem is a mocking reference to “Pack all your troubles,” a popular First World War song that you can hear below which encouraged the troops to hide their troubles and keep smiling as they marched5.

Owen's bitterly ironic poem contrasts the mutilation and death of war with the propaganda that keeps those at home ignorant of the truth. It describes wounded, hopeless soldiers who dejectedly read newspaper propaganda which hides casualty statistics in small print beneath headlines boasting about the “vast booty” of war.

As the title of the poem indicates, the men it describes are, indeed, smiling, and their smiling faces are published in the newspaper for all to see.  However, their smiles are the secret smiles of shell-shocked soldiers like the one in the bottom left of this historical photograph.

Credit: By Photograph taken by Official War Photographer at an Australian Advanced Dressing Station near Ypres in 1917. The wounded soldier in the lower left of the photograph has the "thousand yard stare" indicative of shell-shock. Given that this photo was take

The smiles of the apparently happy warriors featured in the newspaper are, in reality, grins which mask the horror they have experienced on the battlefields of France.

Owen and the Honor of Sacrifice

Owen's best known poem, Dulce et decorum est, takes its inspiration from the Latin saying “Dulce et decorum est pro patria mori”, meaning “Sweet and fitting it is to die for the fatherland”. This is a quotation from the Roman poet Horace which was frequently used during the First World War as propaganda to inspire young men to fight for their country6.

The poem is a vivid eye-witness portrayal of a gas attack. It describes the struggles of worn-out soldiers to keep marching in spite of their utter exhaustion. They are too tired to hear the gas shells dropping behind them until it is almost too late. As they struggle to put on their gas masks they realize that one man is drowning in a “green sea” of chlorine gas. Owen describes the nightmarish death throes of this unfortunate individual in exquisite and horrific detail, and rants resentfully against those at home who:

...tell with such high zest

To children ardent for some desperate glory

The First World War changed the world for ever. Although it has been called “the war to end wars” the economic disruption it engendered and the dissatisfaction created by various post war treaties led to continued conflict.The exhorbitant expense of the war, estimated at $337 billion in direct and indirect  costs, severely disrupted European economies and led to the rise of the United States as a world power. WWI also led to the Bolshevik Revolution, the Great Depression, the rise of fascism, World War Two, the collapse of European colonialism, and the destabilization of the Middle East6, a problem which remains with us today.

It also resulted in a search for a new means of resolving international disputes which led to the formation of the League of Nations, the forerunner of the United Nations, in 19208.

War poems such as those of Wilfred Owen raised disturbing questions about the legitimacy of warfare. They remind us of the sacrifices made by rank and file soldiers in the theater of war, and may be read on Remembrance Day to ensure that we never forget.