This article was written by Cheryl Weldon, MA.  If you would like to read further writings by Cheryl visit her website:  www.cawworldwide.com Infobarrel is a great place to publish your work and has a wonderful community of writers.  If you would like to wite for Infobarrel sign up here. (you also need an account to comment on articles, so sign up now and let us know what you think about what you're reading.)
InfoBarrel is a writing platform for non-fiction, reference-based, informative content. Opinions expressed by InfoBarrel writers are their own.
InfoBarrel > Entertainment > Film > Television

".So are the Days of Our Lives." Soap Operas on TV

“Like sands through the hourglass, so are the days of our lives…”  Who doesn’t remember that opening? It’s one of the all-time greatest themes for a daytime soap opera.  Ah, the soaps, they bring up many memories having little to do with the actual shows; moms leaning on their brooms as they catch the latest ordeal of Erica Kane; guys humbly admitting to sneaking a peak from the couch as they skip school to battle the flu; men complaining wives don’t do anything but watch the soaps all day; women gossiping about the latest exploits of their favorite characters.  But the actual shows bring back a lot of memories as well.  How did the crazy world of soap operas make their way into the lives of so many?

Opening Theme from "Days of Our Lives"

The Beginning of Soap Operas on TV

As with many of the TV shows in the late 1940s and early 1950s, the roots of the soap operas lie in radio.  The program Painted Dreams is considered the first ever radio soap opera which was broadcast for WGN in Chicago in 1930.[3]  The show was created by Ima Phillips who went on to create and write other daytime serials over the twenty years.   Phillips is credited with introducing cliff hanger endings, white-collar central characters and dramatic organ music; all of which became soap opera staples.

Most of the daytime serials on the radio and later on TV were sponsored by companies selling products designed for housewives such as cleaning products and cosmetics.  The close association between the sponsors’ soap products and the shows led the shows to be called “soap operas” or just simply “soaps.”  Leading sponsors included Lever Brothers, Dial Corporation, Colgate-Palmolive and Proctor and Gamble.

In 1946 the radio soap operas made their way onto the television screen with Faraway Hill airing on DuMont Television Network.  The daytime TV show aired from October 2 to December 18 and had a budget of about $300 per episode.[5]  David P. Lewis was both the writer and the director of the TV series.

In the beginning of their TV run, soap operas were aired as fifteen-minute shows each weekday.  In 1956 Proctor and Gamble produced As the World Turns and The Edge of Night as the first half-hour soaps on CBS.   By the end of the 1960s, all of the soaps being broadcast were running a half hour.   As the popularity of the soaps grew, the length of the TV shows increased to an hour with Another World experimenting with a 90-minute show for a short period of time.  At the end of the soap opera reign of daytime television only one soap, The Bold and Beautiful, was a half-hour program.

Initially soap operas were broadcast live from their studios, most of them in New York.  A number of the actors in the TV shows also performed live theater during breaks from their roles in the television shows.  In the 1960s and 70s, soaps began production in Los Angeles because it was cheaper to produce the shows on the West Coast.  General Hospital, The Young and the Restless and Days of Our Lives were just a few of the successful TV series produced in Los Angeles.

Another big change came when the TV series went from live to taped performances. Almost all of the running soaps had transitioned to tape by the early 1970s.  In 1975 The Edge of Night and As the World Turns were the last to stop live broadcasting.  Most of the shows take place in fictional towns and use mostly interior shots.  Ryan’s Hope was one of the first to slowly integrate exterior shots into the action.[2]

Credit: Source: geniefrancis.comIt was during the 1980s, daytime TV series started to incorporate more action and adventure storylines and this entailed a few more exterior shots in episodes.  The 1980s also ushered in more youthful romance storylines and focused on developing super-couples; one of the first being Luke and Laura from General Hospital.  Luke and Laura were probably the most popular of all daytime couples and daytime serials found more men watching than ever before.

U.S. daytime soap operas still hold true to the original format of the shows for the most part.  What sets daytime U.S. TV shows from evening soaps and daytime serials from other countries is the format and duration of the storylines and the visual grammar used.  Stylistic features of U.S. daytime serials include:[2] 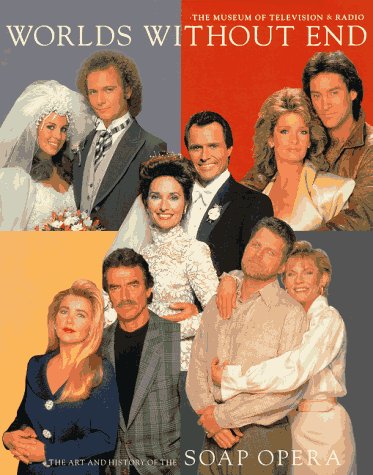 Worlds Without End: The Art and History of the Soap Opera Amazon Price: $29.95 $9.64 Buy Now(price as of Aug 30, 2016)
This is a well-illustrated book with behind-the-scenes production and cast photos from popular soap operas of today and yesterday. In addition it contains interviews with the people who create the storylines, produce and direct the TV shows as well as the actors who play the well-known characters.

Decline of the Daytime TV series

Beginning in the 1970s viewership of daytime serials started to drop.  Several reasons are cited for this decline in soap operas popularity.  Among those are:

In 1999 Passions was the last new daytime soap opera to be created.  Soaps remaining on air began to be phased out at the turn of the century.   The years between 2009 and 2012 saw some of the most established soap operas end their runs. Guiding Light which was the longest running drama in television and radio history ended after 72 years.[2]   As the World Turns aired its final episode in 2010.  It had aired since 1954.  All My Children and One Life to Live, each with 40 years on air, were canceled in 2011.

Credit: Photo courtesy of ABC; Source: Wikimedia CommonsAs of January 2012 only four daytime soap operas remained on air on the three major networks; General Hospital on ABC, Days of Our Lives on NBC,  and The Bold and the Beautiful and The Young and the Restless on CBS.  This is the first time since 1953 only four soap operas are being broadcast on network television.[2]  These four TV shows are renewed until 2014 and after that, their futures are uncertain.  Daytime TV may soon be entirely without the soap operas.  By the way, I remember sitting next to my mom while she was sewing as she watched Secret Storm and The Edge of Night.  When I grew up, I was a big fan of General Hospital.

The copyright of the article “…So are the Days of Our Lives…” Soap Operas on TV is owned by Cheryl Weldon and permission to republish in print or online must be granted by the author in writing.