Before you look up for a Rubik's cube solution, I think it would be nice to learn a bit more about the fundamentals about solving this puzzle. For example, do you know the number of  pieces to solve to get the cube entirely solved? Have you ever seen the internal structure of the cube?

Before I start, do me a favor and get yourself a nice smoothly-turning cube. Some of my friends tried to learn from me but had horrible cubes with which it would take several seconds just to turn one face. No need to spend time trying to fix an old cube, a good cube costs about 10 dollars and it lasts like forever. The following one has a horrible review at Amazon but this is my main cube and most world records were made with this cube. 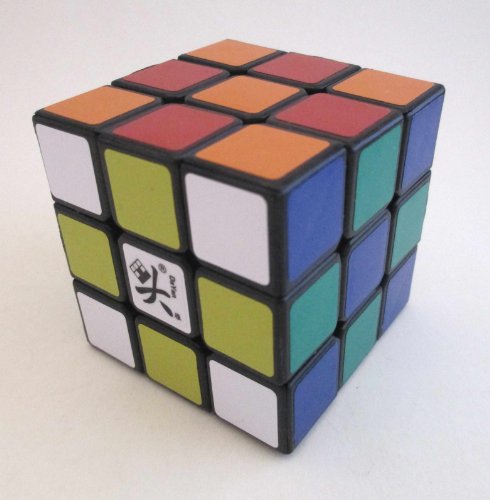 How Many Pieces Do You Need to Solve?

No, it isn't. This reasoning is a natural one but it is completely wrong. The problem is that you should not focus on stickers but on pieces. For example, if one corner is solved, it is solved. And this is true for its 3 stickers. You don't need to solve the three stickers of a corner, you need to solve the corner.

The Elements of a Rubik's Cube

The Rubik's cube is composed of three different kind of elements (cubies, pieces, ...):

The Rubik's cube has 6 center pieces, one per face, in the middle of each face. This piece has only one color. This is all obvious but something you may have missed so far...

For example, if your cube has a yellow center on the opposite side of the white center, you may scramble your cube as much as you want, you will not be able to change that. The internal structure of the Rubik's cube (skeleton) clearly shows it:

As this is a fixed "value" of the cube, it is used as a reference and if you hear someone talk about the yellow face, this does not mean the face with most yellow stickers but the face whose center is yellow.

This, for example, is the yellow face:

The fact it has more blue stickers does not matter.

What about even cubes? 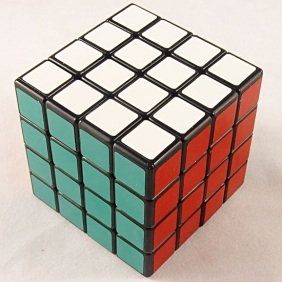 The Rubik's cube has 8 corners. Corners have 3 stickers and this is why I called them the 3-color pieces when I was a kid.

Here is one of them:

The interesting about the corners is that if you focus on them only, solving a Rubik's cube becomes the same as solving a 2x2. So if you want to see how easy/hard it is to solve a 2x2 cube, just solve the corners of your Rubik's cube (ignore centers and edges).

Edges have 2 colors (in the picture below, the black side is not visible when the cube is assembled).

Back to the Original Question

So, how many pieces to solve? 8 corners and 12 edges. 20 pieces. And what is fantastic about this number is that the maximum number of moves you need to solve the cube (God's number) is also 20!

This means that no matter how much you scramble a cube, there will always be a way to solve the cube in 20 moves or less. More about this here: 5 Incredible Breakthroughs in Game Theory.

Of course, during speed contests, people use much more moves. But there is one official event called Fewest Moves where participants need to find a solution for a given scramble with as few moves as possible. They have one hour to do that.

The first time I found an algorithm by myself, I tried to write it down by drawing each move on a piece of paper. I am so skilled at drawing that I never managed to apply this algorithm again and the day after I had already forgotten about it.

All this to say, it is important to have a notation. The speedcubing community has come up with a clear and actually pretty simple notation that you may find here and there on the internet.

Each face is given a letter:

Writing the name of a layer once, means to turn it clockwise while looking at this layer. Which means L and R are not moving in the same direction (a bit confusing at the beginning).

If you want to write that you turn the whole cube, use:

To be honest, it took me years to learn this last bit and I still never use the notation M, S, E (or something) for middle layer turns.

For a visual help, use the excellent site of the excellent cuber Lucas Garron (requires Java) for example for the moves R U F: http://alg.garron.us/?alg=R_U_F&notation=WCA

You can type any algorithm you find on the net in the box on the left and the applet will show you how to move the cube accordingly (use the get back array, the applet shows the final position).

I hope this made the cube fundamentals clearer to you. I wrote this article after the success of my articles about 5 Things Not to Say to a Rubik's Cube Solver and Rubik's Cube like Puzzles. I got many comments from people interested in learning how to solve this puzzle and thought I would start a series of articles about it.

Go to the next article: Solving the Rubik's Cube: Some Important Principles