Enjoyed this review?  Check out some of my others: Assassin's Creed Black Flag Review Final Fantasy X Review The Elder Scrolls V Skyrim Review
InfoBarrel is a writing platform for non-fiction, reference-based, informative content. Opinions expressed by InfoBarrel writers are their own.
InfoBarrel > Entertainment > Games > Xbox

Star Wars Knights of the Old Republic (known fondly as KOTOR among fans) was originally released by BioWare in 2003.  It was a huge hit and an instant classic, giving Star Wars fans the video game that they had always been wanting.  It received countless awards and praise, and recieved 2003 and 2004 Game of the Year accolades from many sources.  Now, more than 10 years later, have video games gotten any better?

I remember well the immersive experience that was Knights of the Old Republic.  The game was perfect, combining great quality gameplay with a masterful storyline.  There are few games out there that practically beg you to play them over and over, and give you new and exciting content each time. The multiple endings, exciting quests, conversation options, and character development kept you coming back for more and more.

Since 2003, games have taken pieces of what KOTOR did and integrated them into their makeup.  BioWare itself has spun out games that are similar, giving gamers a familiar feel each time they pick up one of their games.  None of them, however, come close to what Star Wars Knights of the Old Republic did, in drawing their players into the game and never letting go.

One of the favorite aspects of the game was their use of a morality system.  Star Wars Knights of the Old Republic was not unique in their integration of such a morality system, but they did, however, make it better than any other game up to that point.  Every conversation gave you many options to choose from, and according to your answers and actions, you received dark side or light side points.  Metrics of the game all seemed to revolve around this system, including your force powers, interactions with your followers, and even the look of your character.  The dark side truly does corrupt!

KOTOR also did something that no other Star Wars game had been able to do, which was bring in non Star Wars fans who actually enjoyed the game.  Up until that point gamers knew to stay away from Star Wars games because of their many undesirable characteristics, such as poor graphics, boring plot, frustrating combat systems, and really everything else of low quality.  With Star Wars Knights of the Old Republic, however, even gamers who had never cared for Star Wars could sit down and really get into the game.

Following the same system as the Dungeons and Dragons board game, KOTOR had an invigorating battle system that allowed for turn based strategy as well as real time aesthetics.  Even though everything was turn base, there was no room for hack and slash, but only strategy, and the battles looked interactive and real, to a certain extent.

What really set this game apart, however, was the storyline.  BioWare created a new spin on the Star Wars universe by taking us thousands of years before the movies and other video games.  The fresh start brought new characters, new struggles, and a different feel to the franchise.  Since then, more games have been made based on KOTOR, including an online MMO that is growing in popularity.  Comics and fan fiction have also seen creation based off of the game, and official Star Wars novels have used the characters, settings, and storyline to enhance the content for Star Wars fans.

Here is a call out to all the developers to make more games like Star Wars Knights of the Old Republic!  Improving graphics and ignoring storyline and gameplay isn't going to cut it.  Gamers need the entire experience, one that will have them begging for more and warrant playing through the game time and time again ... Even writing articles about it 10 years  later.

KOTOR gets a 10/10 score, in my opinion.(Here's to hoping that an HD remake is in the works for the future.) 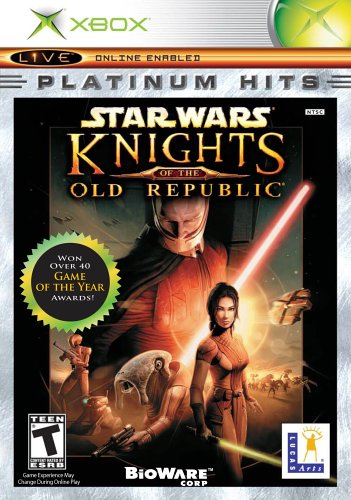