I really hope you enjoyed reading my article. Maybe you'd also like this related article: Making Decisions...Good Or Bad Who Knows? If you'd like to see other articles I've written please click here Do you also love to write? Why not give InfoBarrel a try for yourself. click here to sign up Namaste
InfoBarrel is a writing platform for non-fiction, reference-based, informative content. Opinions expressed by InfoBarrel writers are their own.
InfoBarrel > Sports > Olympics

The Story Of The Last Man Standing

It's no big secret that Australians love their sport. Often found dominating in areas such as swimming, surfing, hockey, rugby and cricket. We even invented a sport of our own called Australian Rules Football. Being a country of sun and surf, we are not particularly known for our prowess in anything that involves snow and ice, so when in 2002 at the Salt Lake City, Winter Olympic Games, an aging, battle-scarred and money strapped "Australian Battler" (as we like to say) stepped up on the podium to receive Australia's first ever Winter Olympics gold medal, Australia and the world looked on in disbelief. This was no normal victory and not only because Steven Bradbury was the underdog. The circumstances leading up to him getting to the Olympics, making it all the way to the final and the total calamity which was the gold medal race itself, have all gone down in Olympic and Australian folklore history, making Bradbury a household name and even adding some words into the Aussie vernacular that are related to this extraordinary event.

"Doing a Bradbury", or "Bradburied" (used as a verb) meaning an unexpected or unusual success.

If an Aussie says to  you, "wow, you totally did a Bradbury" it means you came through when you were not expected too. Which is exactly Steven Bradbury's story. Born in Camden, Sydney Australia on 14th October, 1973. Bradbury loved to skate, on ice...and fast, which is kind of considered an unusual past-time for Australians.

A long history in the sport he loved so much and that nearly cost him his life on a couple of occasions, all came to a head in the final race of his career. Happy with the fact that he had made it into the final, the oldest member in the field had come to these, his final Winter Olympics, to try to redeem himself, feeling he had never skated to his full potential in his previous four Olympic Games appearances.

Myself, along with most of Australia sat glued to the TV to watch what was to become the most amazing race I have ever seen.

Skating well, Bradbury advanced easily through to the quarter finals but it was here it looked likely his games would end. In what seemed like an unlucky draw for Steven, most thought that he would not be able to match the pace of  Apolo Anton Ohno (the favourite from the host nation) and Marc Gagnon of Canada (the defending World Champion) and these were the two whom he had been drawn to come up against in his quarter final race.

Bradbury gave it everything he had, which actually saw him finish 3rd. With only the first two skaters able to go through, it was an amazing effort, but not quite enough. It looked like his games were over. This is when his amazing string of luck started to kick in...Gagnon was disqualified for obstructing another skater and this moved Steven up to 2nd place, one race closer to gold.

Credit: microsoft office imagesCompeting in four races within one night, saw Steven coming to the realisation that he was older than the rest of his competitors. He knew that he wasn't going to be able to keep up with their pace. His tactic was to sit back off the pack a little and if a couple of skaters went down, it may give him an opportunity to get through. This is exactly what happened in the semi final. Defending champion Kim Dong-Sung of South Korea, multiple Olympic medallist Li Jia Jun of China and Mathieu Turcotte of Canada— all crashed, allowing for the Australian to win the race. So many years of hard work somehow now seemed to be lighting up a pathway for Bradbury, showing him the way through to the final and biggest race of his career.

Credit: Photo Credit: <a href="http://www.flickr.com/photos/48889107219@N01/107045938/">debairdâ„¢</a> via <a href="http://compfight.com">Compfight</a> <a href="http://creativecommons.org/licenses/by-sa/2.0/">cc</a>Just happy to have made it into the final race, Steven Bradbury skated onto the ice, planning to use the same tactics that had successfully carried him to the starting line of the gold medal race. The video footage of him going out onto the rink for the biggest moment in his skating career, shows his excitement at being there but also captures his "well here goes nothing, I'm just gonna go out and skate and enjoy the moment" attitude.

From the moment the starter's pistol went off, Bradbury stayed back. It was obvious he was not even going to try and get involved in the fierce rivalry between the top skaters. Staying in touch with the pack through the whole 90 seconds, but staying out of troubles way, he was more than content to sit at the back of the pack. With nothing happening, no falls for the whole race, it looked like that was it; however, on the very final turn, right before the finishing line...chaos erupted. All four competitors (Ohno, Ahn Hyun-Soo, Li and Turcotte) began to jostle for position, ready for the final sprint to the finish line and all four...went down in a tangle of arms and legs. Bradbury sitting right on their tail, but out of troubles reach, glided past the carnage and over the finish line to claim the gold.

A Quick Look At What Unfolds

What Goes Around Comes Around

Credit: microsoft office imagesAfter training for twelve years, representing Australia at four Winter Olympic Games, nearly losing his life twice...once in Canada 1994 after having his leg (quadricep muscle) ripped open by a rival skaters skate and nearly bleeding to death and the second time at training (just 18 months before he won his gold medal) when he crashed head first into the barrier, breaking his neck..... There he now stood, a gold medal around his neck. Hard work, persistence and patience and the fact that he was happy with what he had already achieved before even going onto the ice that night... made the universe somehow came together for Bradbury, propelling him to that specific point in time and proving that you really never know from one second to the next, what life is going to bring your way.

Not surprisingly, after his retirement, Steven Bradbury took up a new career as a motivational speaker. He has published an auto biography "Last Man Standing" and has become a role model for many, proving that success can arrive against all odds, at any time and even in the most unlikely of circumstances.

In His Own Words 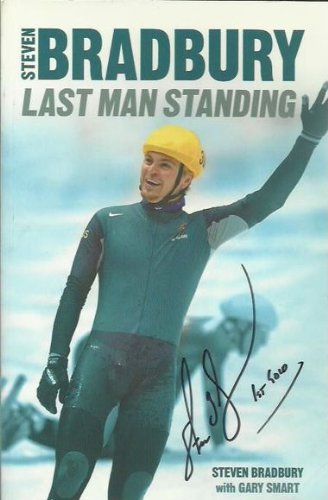