Joe Pickett, the Wyoming game warden, is back in Stone Cold.

This is the fourteenth novel in C.J. Box's very successful mystery series that centers around a rangy, straight forward out-of -doors man battling bad guys and bureaucracies. He stays doggedly on the trail of the villains while at the same time contending with the life issues of his wife and three daughters who swirl in and out of the storyline.

Basically Joe Pickett is a decent family man, trying to do his job of enforcing the fish and game laws of his state without stepping over the line himself. He is a man of conscience, fully aware of the consequences of his actions.

Nate Romanowski, Joe's outlaw friend, on the other hand, feels no compunction to abide by laws that stand in the way of his own code of justice. He kills with dispassionate calm, knowing that his victims deserved death. Trained by the military to be a  relentless killer in special operations, Nate experienced unspeakable atrocities until he became a death-hardened machine. Then, when the political winds shifted, and they no longer needed him, they tried to erase any trace of him, including Nate himself. Using the tools he had been taught, he escaped and has been on the run ever since.

Stone Cold opens with Nate on the Big Horn River in Montana fulfilling a lethal contract to kill a malignant business tycoon with ties to organized crime and corrupt politicians. Nate executes an intricate plan that cracks through the massive security surrounding his target, then using his .500 Wyoming Express revolver, blows a hole through the man's heart. He stuffs the man inside a body bag, drags him to the river and then vanished without a trace.

The victim was one of several high profile men who had simply "disappeared" over the course of the last few years. Federal law enforcement agencies are at a loss for who is contracting for the sanctioned kills. Then, with the thinnest of information, the FBI has narrowed in on their first tangible suspect, a multi-billionaire named, Wolfgang Templeton. He owns a large ranch property in a remote county named, Medicine Wheel.

At this point the, governor calls in Joe for a special assignment; he is to conduct a covert surveillance of the Templeton operation and then report back to the FBI. Under the guise of assisting the local game warden, Joe has explicit orders to conduct a surveillance and report back - without intervening in any way. Fans of the series know that this is just not in Joe's DNA. Within a short time of arriving in Medicine Wheel, Joe is in the middle of things, then in the thick of things and ultimately fighting for his life.

Stone Cold keeps the tension building and the action non-stop throughout the story but, similar to driving the mountainous switchbacks described in the book , the plot seems to skid several times around the sharp curves. Regardless, the novel hurls headlong into the finale that literally ends with a bang. 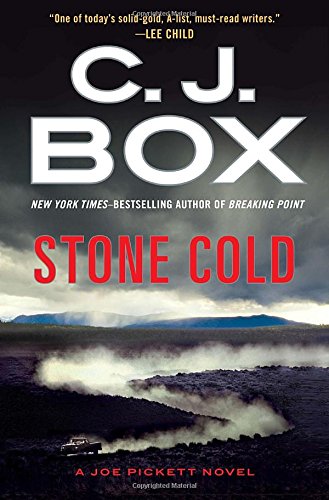