Follow me As I RENOVATE my Fixer Upper!
InfoBarrel is a writing platform for non-fiction, reference-based, informative content. Opinions expressed by InfoBarrel writers are their own.
InfoBarrel > Business & Money > Investing > Real Estate

Stucco - How To Repair A Stucco Ceiling

If you have a stucco ceiling, and for one reason or another, there are some imperfections or better yet a hole!.. there is a way to fix a stucco ceiling without too much cost or having to redo the entire ceiling.

We have a house we are presently renovating, that is 38 years old. It is your basic cookie cutter house, that was built in the early 70's as part of a large subdivision. The ceilings were quite often stucco, as it was a quick way to finish the ceiling.

But what to do when you have damage to this ceiling?. In our case, the upstairs bathtub must have leaked at the drain, and a piece of the ceiling below had to be cut out and the plumbing repaired. The problem being, that when we bought the house, the hole was still there!

We had lots of suggestions by well meaning contractors that we had hired for various renovating jobs we were doing on the house. I would ask each one for their opinion. We had just as many suggestions as their were contractors! One suggestions was to put up another layer of drywall on the ceiling right over top of this one. But that would mean a lot of finishing, as the dining room and living room were all one room.

The next suggestion was to spray the ceiling with water and scrape off the stucco, and sand it smooth, repair the hole and paint the ceiling. I felt the chances of ever getting that ceiling smooth enough for a flat surface were slim to nil. I then tried a company that actually specializes in repairing stucco ceilings. But they wanted $680.00 for this hole, and our renovation budget could not handle that. We were planning on renting this house, and we wanted it to be finished soon, and we just wanted it clean, fixed and fresh.

So, we decided to scrape away just enough stucco to replace the drywall. We had to cut a bigger hole to find the studs to attach a new piece of drywall to, so it was a larger rectangle shaped hole now. So, once we put in a new piece of drywall, we taped the seams and then we tried a couple of products we found on the market. One was a "spray stucco" in a can. That did not work at all, it just look like it was painted white with a couple of lumps in it!

So, next we decided to try a different approach. I purchased a container of ceiling stucco, it was very thick, and then I purchased a big sponge full of holes. Not a smooth one. I then just grabbed gobs of the stucco with the sponge, and sponged it on the ceiling. This is where I found a hair net of some kind would have been good!. Be prepared some will fall, so protect the floor.

But I sponged stucco onto the new drywall, but also into the old area of the ceiling to try and blend it. I tried to follow the pattern of the stucco. We could have rented a sprayer as well, but they tend to do larger areas, and you would have to protect the wall. This sponging of the stucco, actually worked quite well. You just had to take time, and keep adding layers until you could stand back and look at it.

I let that all dry for a couple of days, then I purchased a big fluffy roller that you use to paint stucco, then I put two coats of ceiling paint on the ceiling. It brightened it up, and camouflaged the repair. It is worth trying yourself. If you have water damage or any part of the ceiling that you have had to cut out. Make the hole big enough so that a new piece of drywall can be screwed to the wood beams in the ceiling, then tape the edges, and prime it, then try your hand at sponging stucco. Just keep layering it, until you are happy with the effect.

This is where it is nice to have another person watching you from the floor, and can let you know how it looks, as you are stuck on the ladder with your nose right in it. It can be hard to see your handiwork. Give it a try. 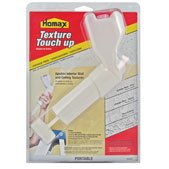 Homax 4105 Spray Texture Touch Up Kit Amazon Price: $14.95 $13.70 Buy Now(price as of May 9, 2016)
for smaller areas you can use these repair kits specially designed for the textured ceiling
Next >> Five Inexpensive Fixes To Help Your Home Sell Faster

Home Equity Loans. Are They Worth It?

5 Things to Remember When Buying Your First Home