Out of the oven just as good as sun-dried

They're easy and much healthier to make at home

Get rid of the goo

One of my favorite pizzerias in Toronto makes the most exquisite sun-dried tomato, goat cheese, and bell pepper wood oven pizza. It's so good, I order ahead of time so I can sneak a piece of it before heading home.

Later, when I worked near a sub place, I'd order a sun-dried tomato and "whatever" sandwich I felt like. One day, I figured I'd just buy sun-dried tomatoes and make my own pizza or sandwich with them.
Well, I did.
The thing is, my man-servant suffered horrible digestive upsets whenever he ate them. Of course, it could be that I was overworking him. Yet he also had similar problems with dried fruit (especially apricots). Well, it turns out, he has a bad reaction to anything with sulfites in it.

If my man-servant is unwell, I'm not happy

Who else will do all the heavy lifting around here?

and 3 ways people react to them

When I looked into his sulfite problem, I discovered it's not all that uncommon. In fact, sulfites are one of ten priority food allergens[1] according to Health Canada.

There appears to be a few ways that people react to sulfites in food:[2][3]

1) The most dangerous (and of immediate concern) is when breathing is affected. When sulfites are broken down in the stomach, sulfur dioxide gas can come up and irritate airways (especially those with asthma).

2) Some people lack an enzyme in their digestive tract which breaks down sulfites. This is what affects my man-servant. This reaction causes nausea, abdominal distress, pain, and "the runs" (diarrhea).

3) An autoimmune reaction sometimes occurs resulting in a skin rash or inflammation.

The sneaky one (without the letters sulf or sulph in the name) is sodium dithionite.[5] It is also known as sodium hydrosulfite.

Thankfully, in Canada new labeling regulations were introducted in 2012 for specific allergens (such as sulfites).[6] In the US, food labels must state the presence of sulfites whenever their concentration is equal to or over 10 ppm (parts per million) total SO2 (sulfur dioxide, an oxide of sulfur).[7]

The thing is, no one knows exactly what how much (or how little) can produce an allergic reaction.[3]

Notably, in an article by Ruth Papazian titled Sulfites: Safe for Most, Dangerous for Some, Dr. Ron Simon, (Head of Allergy, Asthma and Immunology at Scripps Clinic and Research Foundation in La Jolla, California) stated:

So that explains why my man-servant needs a few days off after eating sun-dried tomatoes or apricots.

Have a life-threatening allergy?

Get an EpiPen (or similar) and know where these are: 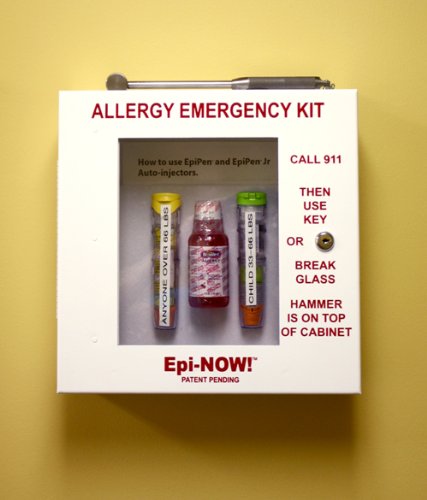 EpiNOW Allergy Emergency Kit - School Lunch Room Epinephrine Cabinet Amazon Price: Buy Now(price as of Mar 20, 2016)
This only requires the prescription medication (and remember to check the expiry date on it and replace as needed). It's shocking that 38.7% of food allergic children in the US have a history of severe reactions.[8] Personally, I feel these kits should be present in every public eating establishment.

You can mix and match varieties if cut the same size

After trying out a few versions, I settled on making oven-dried tomatoes with no spice.

I'll tell you why: some tomatoes contain more water than others. Once they dry out and shrivel up, the spices can be overpowering. It makes sense (yet I was surprised at how many recipes call for tossing the tomatoes in a spicy oil mixture first).

Secondly, cherry tomatoes (or grape tomatoes) have a small area of skin that makes contact with the pan. It's easy to cut them in half and place them skin-side down on a parchment paper-lined cookie sheet. However, larger tomatoes (that require several slices) will dry out more thoroughly on a rack (with a cookie sheet under it to catch any drips).

I found out when I made One Bowl Mini Frittatas, it's best to use sea salt from Guerande, France (if possible). Sprinkle it on the dried up tomato pieces when they first come out of the oven (that way, you're less likely to over-salt them). The addition of basil, oregano, thyme, or other seasoning could be added at this point too.

Since tomatoes shrink to at least 50% their original size (and depending on how dried out you like them), you need at least 4 cups (in total) of already sliced tomatoes. The ideal thickness is about 1/4 - 1/3 inch. They need to be single spaced on parchment paper-lined cookie sheet(s).

Adjust oven racks (if need be) to ensure tomatoes will be centered in your oven. Preheat oven to 200 F (94 C).

Wash and cut tomatoes and place skin-side down (when possible) on parchment paper-lined cookie sheet(s). Tip: If you have really watery or jelly-like goo in your tomatoes, you can scrape that part out to speed up the drying process.

Place in oven for about 3 hours (but check them at the 2 hour point). You may want them more juicy or more dried out (than I do).

Once you are pleased with the amount of shrinkage (never thought I'd ever utter that). Pull the pan(s) out of the oven and sprinkle tomatoes with 1 tbsp. of sugar (trust me, the kids will like them more). Then add sea salt and any other seasoning you desire. Allow to cool on pan for 5 mins and then transfer tomato pieces to a wire rack to cool completely.

Store them in an airtight container in the fridge for up to 2 weeks.

Add them to any pasta, salad, or a sandwich

They make every wrap or pizza extra tasty

Oven-dried tomatoes can also be a side dish