The JBL flip is a wireless speaker which allows you to stream audio from your Smartphone, Tablet, Lap-top or other Bluetooth enabled device.  Whether you’re listening to your Music, Podcasts, or Internet Radio, this is a really convenient and portable solution.  The sound quality for its price bracket of $100, or just under, is quite simply stunning!  It’s great for outdoors if you’re camping, hiking, or around the home and just about anywhere.  If you’re looking for a budget-minded Portable Speaker the JBL Flip should definitely be on your short-list.

A Li-ion rechargeable battery operates the unit, which JBL claims lasts up to 5 hours.  I purchased mine in February 2013, have used it a lot, and this has pretty much been my experience.  Battery charge time is around 3 hours. The mains charger is supplied.

Like many speakers of this kind, the Flip has a built-in microphone.  This means you can use it with your Smartphone for making & receiving calls and enjoy the benefit of hands-free- calling.  This is a helpful feature and works well with services such as Skype and Face Time.

Originally at launch, the Flip was only available in black or white.  Other colors have now been added: blue and red.  Dimensions are 63mm in diameter and 160mm in length (2-7/16" x 6-5/16") and it weighs 2.00 pounds.  The design of the Flip is such that it can be positioned horizontally or vertically which is handy if you need to place it on a small desk, shelf or mantle, and space is limited.

A LED tells you whether the unit is switched on and operating, or when performing the pairing function and when the battery is running low.  There is also a useful 3.5mm Aux In jack on the rear of the unit so you can still connect via cable to your non-Bluetooth audio devices.

This is a super convenient and portable speaker.  The overall plus going for this speaker is its rich quality of sound which completely belies its size.  JBL have done a great job in this area.  It is very quick and easy to run through the initial set-up and connection is a snap from thereon.  The ability to use it upright or horizontally definitely comes in handy for some situations.  Included in the box is a cool neoprene protective case which is perfect if you are taking it on your travels: suitcase, back-pack or lap-top case.

I’ve only used it a handful of times as a Speakerphone.  I’ve not encountered any problems on this front but to be honest I’ve not used this feature heavily enough to really comment.  So if you wanted to use it specifically as a Speakerphone device, I’d suggest checking out some further reviews.

My research did unearth one interesting fact which is that since March 2013 a different and newer Bluetooth Antenna was introduced.  I’ve not experienced any issues with my older unit but it sounds as though if there was a problem in this area, JBL have taken steps to address it.

The volume levels are fantastic for its size.  No problems in the volume department at all.  In fact to be honest there is very little I can say that’s bad about the JBL Flip especially at this price-point.

If I’m really pushed and could ask for more from the JBL Flip it would be that battery life was a little better.  But I feel this is somewhat of a harsh comment.

For some users, the fact it cannot be charged using a typical USB port connection might be a disappointment but for me it’s been convenient just to use the charger that was supplied.  There is not an option to use the Flip to charge other devices.

If battery life and USB device charging capability is specifically what you want then I’d suggest you explore the JBL Charge which is basically the big brother to the Flip.  It has a larger battery that will last up to 12 hours and USB port capability.  However, it does not have a built-in microphone and is of course a larger unit.

Just to state the obvious, this is a small speaker so it will never come close to competing with a fully sized traditional Hi Fi system in terms of bass depth and true audiophile sound quality but hopefully this point is already appreciated.

In terms of direct rivals and alternatives to the JBL Flip there are many, but most frequently mentioned are the Logitech UE Mobile Boombox, Jawbone Jambox, and Beats Pill.  The general consensus is that the JBL Flip outperforms all of these and is either roughly the same or better in terms of price.  I'm really struggling to come up with any more cons!  Urm...it's made in China - see what I mean?

For a small speaker the JBL Flip certainly makes a big impression.  I have absolutely no regrets in buying one, would strongly recommend it to anyone and in fact might be buying a second unit shortly.  With a performance its similarly priced rivals can’t match, it’s perhaps the optimum blend of portability, performance and price. 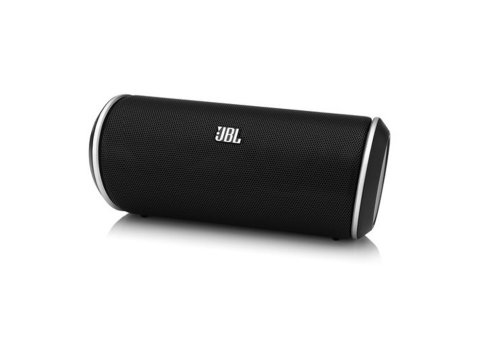