I have been using this tuning pedal for over a year now and I must say that I can't imagine using anything else. A good tuner is a vital addition to any guitarist or bass players pedal board and the Ploytune by TC Electronic has been exactly that for me over the last year or so. With this in mind, I thought it would be useful in this review to outline a few of its best features and some reasons why this is a must have for all gigging, recording and performing guitarists and bassists.

The pedal is very sturdy. Built out of cast aluminium, it's a reasonably small box that comes in either white or black and has similar length and width dimensions to an iPhone 4S but it is about an inch or so thick. To operate it you need to press a small silver button with your foot (hence the name stomp box) which switches the tuner between its tuning mode and bypass. Even after a year of gigging, the box operates with no problems. The tuning is still accurate, the box is unit is still in good condition and it hasn't required any kind of repair work. There are four small rubber feet on the bottom to stop it from sliding around and three of them have come off which isn't ideal but this hasn't proved to be a problem. There are some very good built in features such as the easy access to the battery compartment on the underside of the pedal. It has a large screw which looks like it needs a flat head screw driver to open it up (shown above). However, this can in fact be undone with a penny coin or guitar pick which is a great feature. Once the screw is removed a small compartment holding a 9v battery can be reached. The pedal can also run off a power supply but on battery power you can expect about twelve to fourteen months of usage.

The most ground breaking feature of these pedals is that they can tune polyphonically. This means that rather than tuning each string one by one, you can strum all the strings on your guitar at once and you can proceed tuning. This is a huge time saver and also very easy to use. If you prefer tuning one by one this is also possible. When tuning strings one by one, the Polytune works chromatically. The note you are closest to is shown with a sliding line moving across the display. If the line is red then the note is out of tune and if it settles on green in the middle you are in tune. It's accuracy is 0.01 cents (very accurate) and several alternate tunings are also programmed into the pedal which again is a huge time saver because you can simply set you preferred tuning, strum all six strings and then tune up. You don't have to worry about doing them one by one. If you have quick guitar changes in-between songs then this is especially useful. The LED display makes this very easy to see no matter what playing situation you are in. I have used this pedal in orchestra pits, on big stages, out door festival gigs and also in smaller venues around London and the display has always been crystal clear. Another great feature is that this pedal uses a true bypass so your tone isn't affected in any way.

This is a fantastic pedal. The build quality is first rate, it is so easy to use, it's quick and I genuinely do feel that TC Electronic have solved a problem in creating these pedals. It's also very reasonably priced at just £65. It may seem like a lot but this really is something that you will use on every gig. At the time of writing this I have used it on over three hundred performances and never had any problems. Personally, I wouldn't want to use any other tuner. I would go so far as to say that this is a must have for any guitarist or bass player. Whether you are a busy professional or just a keen weekender, a good tuner is a must and they really don't come much better than this. Still not convinced? Check out this YouTube video listed below and you'll just how many huge names also think that whether you play jazz, metal, rock, pop or country, this pedal is a vital part of their gigging, practice and recording set up.

If you found this article useful then leave me a comment below and let me know what you think! 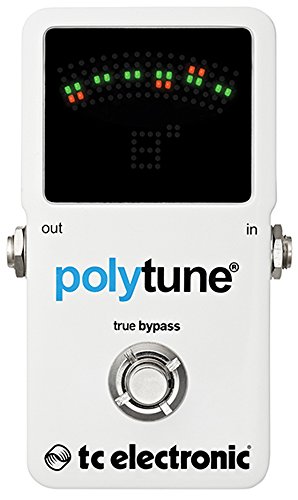