When I am not a Signaller for Network Rail (previously known as British Rail) I write articles for InfoBarrel, Squidoo and my own websites. You can follow all of my exploits on GoldenBlock.co.ukÂ or my Google Plus (G+) account Darren Whittenham-Gray+
InfoBarrel is a writing platform for non-fiction, reference-based, informative content. Opinions expressed by InfoBarrel writers are their own.
InfoBarrel > Technology > Gadgets

If you are looking to network your home then most of the time you are going to need a wireless router. To connect my computers, laptops, tablets and mobile phones to the Internet I use a TP-Link WR1043ND wireless home router. I will have to dig out the receipt (I still have it!) but I think I have used this device since 2009

I actually bought this router because my earlier Belkin model was rubbish. The wireless connection kept dropping and the user interface for managing the router itself left a lot to be desired. I did not actually opt for this model specifically but I ordered my local computer retailers "unbranded" Wireless N Router; this is what I got and it is great!

Credit: AuthorThis router has worked well with what was the NTL standard Cable Modem and that was the case until we moved to a new property and the Virgin Media team said we had to take their SuperHub. We very realised that the SuperHub was worse than the Belkin of 2009 and went back to the TP-Link.

The TP-Link WR1043ND is designed for Cable Internet connections and does not come with an ADSL modem built-in. If you can configure your ADSL router into modem only mode, you can then connect this router by Ethernet instead.

and it is pretty much spot on although I would argue that it is the Ultimate.... there have been a few problems along the way.

When you first open the box there is first a little DIY to do which is screw the three wireless aerials into place and admire the great work you have done; your router is now ready to start plugging in. As long as you remember that the single Ethernet port is for your incoming Internet connection and the 4 Ethernet ports are for your wired devices; setting up a wired connection is as simple as Plug & Play.

If you only plug-in your wired connections and leave it you are risking your router being open to all and sundry. If you are never going to use the wireless connections on your router then you have probably spent too much money on equipment you don't need; for everyone else though you need to make sure you have a secure home computer network and doing this on this particular TP-Link router is really easy.

The security set-up and features are often based on each users preferences so we will not go into detail here; but the router supports up to WPA/WPA2 security and up to 152-bit. This is more than adequate for a home computer network.

Credit: AuthorWhen I was setting up the user accounts to share my USB hard drive it took three or four attempts (and different passwords) to get everything working. I knew that the password was right, I wrote it down first to make sure. Whether the TP-Link firmware does or does not like capitals, case-sensitivity or special characters I was never sure as soon I had the passwords working. The USB port on the back of the TP-Link WR1043ND is designed for you to be able to share across your network. In the past I have used it to share an external hard disk drive and treat it like a back-up server, but then I upgraded my computer and used the old one to build my own NAS File Server. I then found out that my printer was compatible with the routers print server function; I did use it and it worked to an extent but there were issues.

You are permitted two user accounts for this as well. An "admin" access allows you to read and write; a "guest" access allows you read only. This is useful if you have friends to stay and want to offer access to your video collection.

When the TP-Link firmware updated, it offered print server capabilities. The only problem with this is that you have to download and install the TP-Link print server onto your computers and laptops; not a great solution if you use a corporate device that is locked down tight. I also found that if I had used my laptop elsewhere using a 3G Internet dongle, then if I had used sleep and not shutting down my laptop, it would not always print through the TP-Link when it woke up.

This is not something I experience now, with my printer connected directly to my desktop and shared across the network. I never managed to resolve whether it was a hardware or a software issue.

There are other facilities for the USB sharing connection that I have not tested with the TP-Link; primarily because it did not suit me; namely FTP server and Media Server. 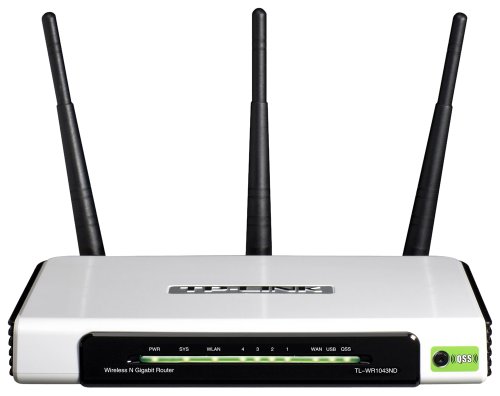 There are some other great features which have a number of uses. I have not tried these out so I can not tell you how good they are or not!

Parental Controls - Just like when you restrict a childs console time, you can restrict their Internet time through the router as well! If they have their own computer then using the unique MAC codes you can tell the router when that particular device can use the Internet and even specific websites. You simply assign your main computer terminal as the Parent PC and then you can assign rules right down to Only allow access to InfoBarrel for 1 hour on a Sunday.

IP Binding - If you have a file server on your network or you make use of remote access then knowing the IP addresses of your devices can be essential. This TP-Link router enables you to offer a static IP for devices on your home computer network so that you can do that easily.

Something It Doesn't Do - client mode

While I have been playing around with the WR1043ND and my Virgin Media Superhub I have found something that the router can not do and that is act as a client on a network. Some of you might be looking for a router that you can hook in secondary to your main modem/router/hub and just use it as a wireless or wired access point.

It appears that some have queried this with TP-Link, who have said that it is not currently a part of the routers firmware. It is possible to get around this using more advanced methods such as flashing other firmware onto the device; something for another article on another day!

It must be something when the much hailed Virgin Media SuperHub gets superceded by a 3 year old router; but that is what happened when a certain ISP provides substandard equipment. If you are looking for what is now a budget wireless router with some top features then you can not go wrong with a TP-Link WR1043ND Gigabit Router for your home computer network; unless you can tell us different below, of course!