I've spent most of the past two decades in East Asia, holding lecturing and publishing positions in Hong Kong, Japan and South Korea. Among my favorite places are Taiwan and the Philippines. I'm fascinated by local religions and customs, and enjoy reading about history and how the English language changes and develops. I enjoy writing on InfoBarrel. If you love writing, sign up today.
InfoBarrel is a writing platform for non-fiction, reference-based, informative content. Opinions expressed by InfoBarrel writers are their own.
InfoBarrel > Health > Exercise & Fitness

Why Taking The Stairs Could Save Your Life

Ryszard Kapuscinski (1932-2007), a Polish reporter best known for his writings about Africa, was ahead of his time when he announced: "Upon the desk I have declared a silent war." However, in The Soccer War (a book named after a brief conflict between Honduras and El Salvador) he made it clear he wasn't concerned about the effects on a person's physical health of spending several hours each day behind a desk. Rather, Kapuscinski believed that desks enslave people, and cause them to think like bureaucrats.

As you've likely heard, health specialists have concluded that sitting for long periods is seriously detrimental to human health. Whether it's in a car while commuting, at a desk in an office, or on a sofa watching TV, there's now little doubt that simply sitting down a lot makes you more likely to suffer from heart disease, diabetes, strokes, depression, and other ailments. What's surprising is this appears to be true regardless of your BMI (body mass index), or how much exercise you get at other times. Moreover, sitting for a major part of each day has been linked to metabolic syndrome, in which sufferers are afflicted by issues usually including abdominal obesity, hyperglycemia, and high blood pressure.

According to one study, reported in the online journal BMJ Open in July 2012, two years would be added to life expectancy in the US if the time adults spend sitting was reduced to three hours or less per day. Not smoking is estimated to add 2.5 years to the average American male's lifespan, and 1.8 years to an American female's longevity, so the study's conclusion strongly suggests that the health consequences of sedentary lifestyles are every bit as bad as smoking. Several other studies have come to very similar conclusions, prompting health commentators to describe sitting as "the new smoking" in the threat it poses to a massive number of people.

For generations the Chinese have been saying: "Walk while you're young so you can walk when you're old." Long before the internal combustion engine made getting from A to B quick, comfortable and convenient, people in China were aware, it seems, that avoiding physical exertion in the first half of one's life would lead to health problems in the second half. However, the current fad for standing desks - a way to reconcile the need to stand with the need to work and make money - is recent and American in origin. 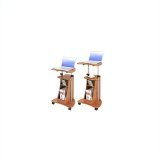 Are there better options than standing or walking?

No doubt a good many of those who've heard how damaging sitting can be to their health have resolved to go for frequent constitutionals. Likely, some of them do walk more now than they used to. But there's an even better way of getting a mild workout that won't injure you, and which doesn't require any equipment: Shunning elevators and taking the stairs whenever you can.

Climbing stairs doesn't burn a phenomenal number of calories - just two or three for each floor you ascend - but it's undoubtedly good for your quadriceps, hamstrings and gluteus maximus, because you're not moving straight ahead as is usual when jogging or cycling. Also, the more you weigh, the more energy you need to move when battling gravity. For heavier individuals, therefore, taking the stairs is an especially effective way of expending calories. Overweight men and women who begin a regimen of stair-climbing will soon notice improvements in their breathing, so long as they persevere through the initial stage during which they'll almost certainly feel themselves gasping for air and dripping with sweat if they do ascend at least three floors each time, as recommended by doctors.

Medical research has identified concrete health benefits of stair climbing which go beyond those of walking on flat paths. One is lowering of the risk of stroke, over and above the improvement gained from straightforward walking. Another is that clambering up and down stairs requires the use of skeletal muscle. This bolsters your muscle tissue's ability to use insulin and absorb glucose, which makes the onset of diabetes less likely. Better musculoskeletal health undoubtedly reduces arthritis pain.

Hills are as good as stairs...

...and, it goes without saying, less monotonous and far more scenic. If there are no stairs in your home or place of work, find a small hill - preferably one with a decent path to the top, so you can hike up and down without the risks of tripping over a branch or slipping after rain. You might assume most of the health benefits result from the hard work you do getting to the summit, but an intriguing study done in Austria just over a decade ago suggests downhill hiking (or walking down stairs, then returning via the elevator) produces desirable physical changes quite distinct from those gained by marching to a higher elevation.

According to reports, scientists were surprised to discover that walking down a hill (but not hiking up it) a few times each week for two months seemed to lower participants' blood glucose levels, which in turn cut the risk of diabetes. Meanwhile, walking up the same hill (but going down by cable car instead of descending on foot) reduced triglycerides, a fat which can boost your cholesterol to dangerous levels.

So the message is clear for those who work on the upper floors of tall buildings. At lunchtime, turn off your computer, stand straight, then take the stairs down to ground level. Go for a brisk stroll, then return to your desk via the stairs. I practice what I preach: I haven't used the elevator in my apartment for over seven weeks, even when carrying a sizable bag of fruit home from the market. I can feel it's doing me a substantial amount of good, even if my neighbors think I'm eccentric.

A leading expert's bang up-to-date book about the hazards of, and solutions for, over-sitting: 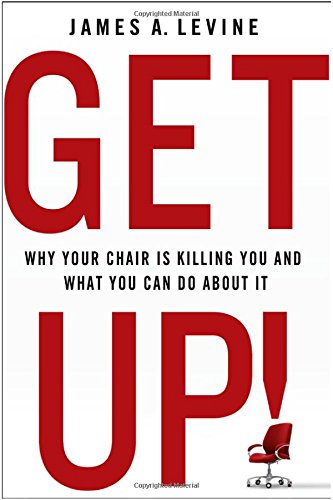