Temperament Styles According to Tim LaHaye

Throughout history people have made attempts to label others; to fit people into some classification that helps others to understand them.  No specific theory can perfectly describe types of temperaments; people tend to not fit into one particular type.  However, it is useful to use temperament types as a guide to understanding others.

Hippocrates, a brilliant Greek physician and philosopher, theorized four basic temperaments could be based on the four prominent bodily fluids; blood; “choler” or yellow bile; “melancholy” or black bile; and phlegm. Hippocrates surmised that each temperament was caused by one of these bodily fluids.  He believed the Sanguine was characterized by the rich warm blood; Cholerics had too much yellow bile; Melancholies had dark blood he called black bile; and Phlegmatics had thick blood he called phlegm.[1]

The Sanguine temperament is characterized by feelings rather than reflective thought to form decisions.  Sanguines are lively and fun-loving.  They are thrilling storytellers and never lack for friends.

Sanguines enjoy people and do not like solitude.  They are never at a loss for words; can become easily distracted during tasks if the opportunity to socialize appears.  They often speak before they think; yet feel great remorse when something goes wrong.

Sanguines make good entertainers, salespeople, and preachers.  They do better in careers that expose them to interactions with people.

Cholerics are active, practical and strong-willed.  They are extremely independent and tend to be decisive and opinionated.   Cholerics take a stand on issues and are not frightened by adversities.  They often succeed where others may fail due to their persistence.

The emotional nature of cholerics is the least developed part of their temperament.  Their primary interests are those that have utilitarian value.  Compassion doesn’t come naturally for the choleric.  While they tend to be successful in most arenas; at home, the choleric often fails as love is not a priority in their lives.

The melancholy temperament is often referred to as the dark temperament.  However, the melancholies are analytical, self-sacrificing, gifted, perfectionists, and have a very sensitive emotional nature.   Feelings dominate this temperament.

Though melancholies do not make friends easily; once they do, they are quite faithful and loyal.   Melancholies are the most dependable of the four temperaments.   Though melancholies like others; their disappointing experiences make them reluctant to take others at face value.

According to LaHaye in “Spirit-Controlled Temperament”; “as a general rule, no other temperament has a higher IQ or more creativity or imagination than a Melancholy, and no one else is as capable of such high-quality “perfect” work.” [1]

Melancholies are often composers, philosophers, scientists, and perhaps surprisingly, actors.  Acting, though usually identified as attractive to extroverts, allows the melancholy to lose self in another character.  Humanitarian careers attract the melancholy as well.

Phlegmatics are characterized by their calm, easy-going manner.  They are kind-hearted and sympathetic; usually keeping their feelings under the surface.  They have a natural dry sense of humor and make friends easily.  They try not to be too involved in the activities of others, choosing instead to be spectators.   They are not often motivated to move beyond their daily routines.

Phlegmatics are somewhat reluctant leaders.  They don’t often seek leadership but once it is thrust upon them, they tend to be highly competent and efficient.   They are gracious and natural peacemakers.

Because of their patience phlegmatics do well as teachers.  They are also attracted to engineering and mechanics.  Phlegmatics are not risk takers and often are attracted to jobs that have retirement or security benefits such as civil or military service.

It is human nature for people to try to fit themselves and others into boxes; labels in attempts to understand their behavior and the behavior of others.  Four basic temperaments have been outlined here; however, LaHaye as did Freud, Myers & Briggs and Keirsey; understands that people do not fit perfectly into one box.

The copyright of the article Temperament Styles According to Tim LaHaye is owned by Cheryl Weldon and permission to republish in print or online must be granted by the author in writing. 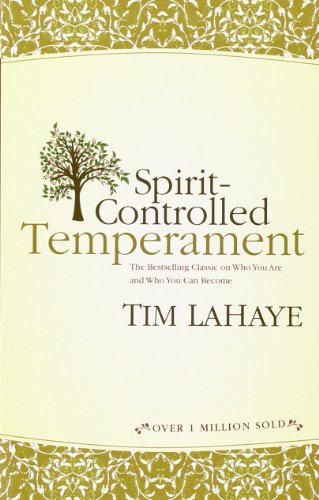