Thanksgiving Inflatables and Outdoor Yard Decorations on Amazon
InfoBarrel is a writing platform for non-fiction, reference-based, informative content. Opinions expressed by InfoBarrel writers are their own.
InfoBarrel > History

10 Interesting Facts About the Pilgrims You Probably Never Knew

Do You Know These 10 Pilgrim Facts?

As you sit down to feast on turkey, sweet potatoes, corn and pumpkin pie this coming Thanksgiving, you can play a little trivia game using these ten interesting facts about the Pilgrims.

1. Not all of the Pilgrims left England because they wanted freedom from religious persecution.

This interesting fact about the Pilgrims and Thanksgiving tells more than what we are taught in school. While several of the Pilgrims (called Separatists) did want to flee England for religious freedom, others went to the New World for business opportunities, some were hired hands and some were servants.

3. The Mayflower crew and the Pilgrims did not get along very well.

The Pilgrims were unaccustomed to the sea, and frequently became sick. The sailors called them "glib-glabbety puke stockings."  Conversely, the Pilgrims did not like the sailors' "salty" language.

Another interesting fact is that by the time the journey was over, the sailors were impressed by their fortitude.

and is written in a manner they will understand and enjoy.

4. The Mayflower was no luxury cruise.

The journey from England to the New World was an uncomfortable one. The Mayflower was a cargo ship and not meant to carry the 102 Pilgrims and 30 crew members. The travelers had to spend most of the sixty-six days of the journey underneath the ship in cramped quarters.

What makes this an interesting fact is their lack of hygiene. There was no bathroom, so they had to use buckets to relieve themselves. There were no showers or laundry, so most of the people did not bathe and wore the same clothing for all sixty-six days of the voyage! Can you imagine the bugs, the dirt and the odor on that ship?

5. There was no midnight buffet on the Mayflower and the food was awful.

The Pilgrims had very little variety in their diet. Because of the winds, they were unable to cook their meals and ate everything cold. They ate "hardtack", a dry biscuit. Insects infested much of the food that was aboard the ship.

6. A baby boy was born on board the Mayflower.

Despite the horrid conditions on the Mayflower, a baby was born while it was crossing the ocean. The name of the baby was  Oceanus Hopkins. [1]

Get together with your kids to create this 3D puzzle of the Mayflower.

7. They did not settle in the first place they landed.

On November 9, 1620, the people spotted land at Cape Cod. After a search party of the healthiest men went out to find Plimouth, they again set sail and land on December 21.

8. The survivors has to bury their dead in the dark.

During their first winter in Plimouth, more than half of the people died from illness. In order to not let the Native Americans who lived nearby know how much their ranks had shrank, they buried the dead in the dark so no one could see their decreasing numbers.

Their two Native American friends, Squanto and Samoset, spoke perfect English. Squanto taught the Pilgrims to plant with fertilizer, such as fish heads, with their seeds.

10. The first Thanksgiving feast was based on the Jewish holiday of Sukkot.

In the fall, when the harvest was great and bountiful, the Pilgrims decided to give thanks to G-d and their Native American friends for helping them through their first year in the New World. 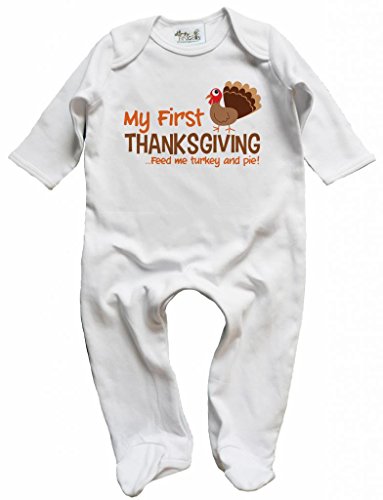 The Jewish holiday of Sukkot celebrates the fall harvest, and being religious people, the Pilgrims based their feast on this holiday found in the Bible.

What was served at  the first Thanksgiving?

Your children can recreate the first Thanksgiving with this Fisher Price Little People Thanksgiving set. It has thirteen pieces, including everything you see in this picture.

So while you gobble up your turkey with family and friends, see if they know any of these ten interesting facts about the Pilgrims.

A Visual Look at Their Hardships