The 1994 Baseball Strike and the Demise of the Montreal Expos

In 1994, the Montreal Expos had the best record in all of Major League Baseball. They were a team stocked with many talented players, and were believed to be on their way to the franchise's first World Series appearance. In August of 1994, however, a labor stoppage cut the baseball season short and ended any chance of the Expos making the World Series. The strike was, and still is believed to have led to the demise of baseball in Montreal.

Credit: www.cbc.caThe Montreal Expos were an up-and-coming team and had developed into championship contenders in 1994. Their roster featured young stars such as current Hall of Fame pitcher Pedro Martinez and outfielders Larry Walker and Moises Alou, and established players such as outfielder Marquis Grissom, starting pitcher Ken Hill and closer John Wetteland. They were led by veteran manager Felipe Alou, who would be named Manager of the Year later that season.

Credit: www.bleacherreport.comThe Expos' stellar play gave them the best record in all of Major League Baseball at 74-40, and propelled them to first place in the National League East division, ahead of the perennial favorite Atlanta Braves. The team was also posting good home attendance figures, and were on pace to draw nearly 2 million fans that season. However, all of that would change in August of 1994.

Credit: content.time.comThroughout the season, there had been rumblings about a possible baseball strike. The owners proposed to implement a salary cap as a way to keep a competitive balance between baseball clubs. However, the players union (arguably the strongest union in the country) was vehemently against the owners' proposal. Though there were negotiations during the season between the two parties, no agreement was reached and the players threatened to strike (setting August 12 as their strike date). When that date arrived, both parties were still far apart on an agreement. As a result, the players made good on their threat and walked off of the job. Lack of movement in negotiations eventually led to the cancellation of the rest of the season, including the World Series for the first time since 1904. The strike (which was the 8th work stoppage in 22 years) lasted for 232 days and finally ended with court intervention in April of 1995. After a shortened spring training, the 1995 baseball season commenced with an abbreviated 144 game schedule.

Credit: http://www.stadiumpage.com/concepts/Labatt00_R.htmlAfter the strike, the Expos were not the same team. The team incurred huge losses because of the strike and had to cut payroll. Since the Expos could not afford their star players, they had to either trade them away or let them walk in free agency. Because the product on the field was diminished, attendance at home games dropped significantly. Though there were efforts by the previous ownership in the early '90s to build a new ballpark, the strike dealt a major blow to those plans. In 2000, owner Jeffrey Loria (now current owner of the Miami Marlins) attempted to secure funding for a downtown ballpark to be named Labatt Park, but was unsuccessful. Eventually, the Expos were put up for sale, but could not find an owner. Then in a weird twist in 2001, Major League Baseball bought the Expos from Loria, and the team was controlled by the owners. They later voted to contract both the Expos and Minnesota Twins, but contraction was struck down due to an agreement with the players association. After several years in limbo (including playing 22 games in Puerto Rico in each of their final 2 seasons), the Expos were moved to Washington, D.C. for the 2005 season.

What Could Have Been

Credit: en.wikipedia.orgTo this day, many wonder what could have been for the Montreal Expos if the 1994 season didn't end abruptly. What happened the next baseball season only gives more energy to those thoughts. In 1995, the Seattle Mariners were facing the possibility of leaving the Pacific Northwest if they didn't get a new ballpark. Additionally, home attendance was floundering due to the team's on-field performance in previous years. The Mariners hovered around .500 for most of the season, but made a strong late season push to force a one-game tiebreaker with the then-California Angels. They would win that game over the Angels, 9-1, winning their first division title and advancing to the playoffs for the first time in team history. Their historic run excited the fan base, and stirred them up even more after defeating the New York Yankees in an exhilarating 5 game series (after being down 2-0 in the series). Though they didn't make the World Series, the Mariners' late season run was enough to secure funding for a new ballpark and stay in Seattle. If the 1994 baseball season had continued, perhaps the Montreal Expos would've made history instead of being history. 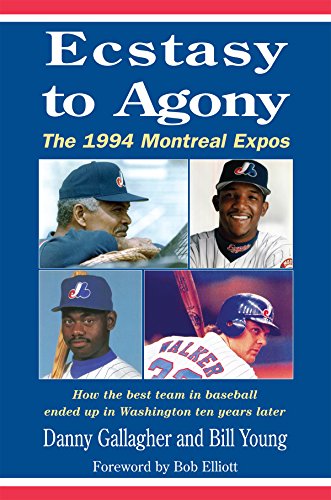 Ecstasy to Agony: The 1994 Montreal Expos: How the Best Team in Baseball Ended Up in Washington Ten Years Later Amazon Price: Buy Now(price as of Jul 11, 2015)
Next >> Lou Gehrig: The Luckiest Man on The Face of the Earth