Fasts have been used for thousands of years to cleanse the body of "demons" and toxins. Given the processed food we eat today, detoxification is claimed to be more relevant than ever. One of the most popular fasts is the lemon detox - or the "master cleanse". There are a myriad of articles online depicting the exact instructions of conducting the fast, and hailing the health benefits. This article is not one of them. Instead, the goal is to present a diary of an experiment on myself, along with the results I had.

The reason why I even got interested in detoxification was my stomach. Despite eating well, and exercising extensively I’ve had problems with stomachache and bloating for several months. After rigorous tests in the health center, nothing was found. Since the Western medical know-how couldn’t help, I started to look for other means of getting better, and found detoxification. It had been used to cure stomach illnesses for over 50 years and hence, I decided to give it a try.

Following the general instructions, I started slow with berries for breakfast. For lunch I had liquid veggie soup with fennel. Eventually I had my first lemonade in evening. It contained 2 tbsp. of organic maple syrup, 2 tbsp. of fresh lemon juice, 10 ounces of water and 1/10 tsp. of cayenne – in accordance with the original recipe. In addition, I tried the salt-water flush by drinking a liter of water with two tsp. of crystal salt.  By the time I went to bed, I was happy to start the experiment but feeling weird after the salt-water.

On the second day I had my first lemonade early in the morning after a moment of mediation. I had five hours of work ahead of me, so I prepared one shake to serve as lunch. After getting back home and taking another lemonade to ease the growing hunger I had my first signs of headache. I’ve had occasional migraine attacks through my life, but this time it was highly inconvenient since the medicine was not to be taken into an empty stomach. It’s quite safe to say that the evening was one of the worst I’ve had in a long time. I felt so weak that my initial plans of having a short walk outside were quickly extinguished. Even reading a book was too much and I was left with watching Netflix series until I went to bed quite early. Surprisingly, and despite all the discomfort I passed out almost instantly.

In the morning I woke feeling slightly weak but otherwise much better that the evening before.  I started with plenty of water, and later with a liter of salt-water. During the day I managed to get outside for a walk, feeling unusually light. Probably hallucinating from the weakness, I felt closer to nature while in the nearby park and highly energized, even though I knew I hadn’t eaten anything for quite a while.  Nonetheless, I decided to end the experiment prematurely. I knew I had to work the next day and feared I’d be too weak without any food. I made a cabbage soup with some rice and maple syrup - it tasted heavenly after being without solid food for 52 hours.

Unfortunately, the interrupted cleanse did not cure my problems. It could be that 2,5 days were not nearly enough, or maybe the issue was not within the toxins in the first place. But even though the experiment practically ruined a good weekend, it was an interesting experience where I learned more about myself. In terms of self development, it was worth a try.

My subjective insights from the experiment: 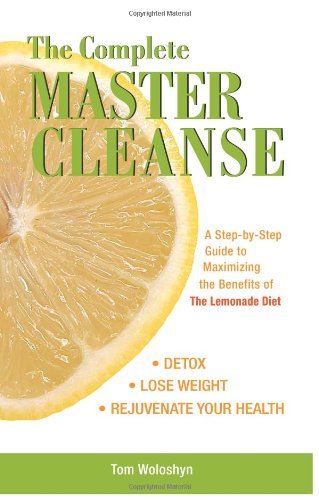 The Complete Master Cleanse: A Step-by-Step Guide to Maximizing the Benefits of The Lemonade DietAmazon Price: $13.95 Buy Now(price as of Oct 12, 2013)
If you're interested in the Master Cleanse despite my warnings, I strongly encourage you to read this book. It contains all the information you need for preparation and implementation.
Next >> Spices as Medicine: 8 Spices with Healing Powers