Indian Summer is an InfoBarrel author with an interest in personal finance and travel.  If you are interested in writing online in a great community InfoBarrel is the place for you.  You can find out more about this community by following this link.
InfoBarrel is a writing platform for non-fiction, reference-based, informative content. Opinions expressed by InfoBarrel writers are their own.
InfoBarrel > History

The 5 Bloodiest Battles of the American Civil War

The American Civil War cost more lives than any other war that the US had been involved in up until that point.  One of the main reasons for the huge numbers of casualties is that every soldier who was injured, regardless of which side he was on, was an American.  Below is a list of the bloodiest battles of the war along with some historical information regarding each.  Casualties include killed, wounded, captured, and missing.

Antietam, aka: Sharpsburg, was fought in Maryland on the 17’Th of September, 1862.  Union forces were under the command of George McClellan while the Confederates were under the charge of Robert E. Lee.  There were 113,500 men in the battle with Union forces numbering 75,500 and Confederate forces numbering 38,000.  Although the battle lasted only one day, there were over 22,500casualties.  Union casualties were 12,401 and Confederate casualties were 10,316.  Over 3,600 Americans lost their lives in the single day of battle.

The outcome of the battle of Antietam was inconclusive, although it was a strategic victory for the Union because it stopped the first Confederate invasion of Union territory.  The battle also provided an excellent opportunity for President Lincoln to remove George McClellan from command as well as issue his Emancipation Proclamation due to the resulting political climate.

The Battle of Chancellorsville was fought in Spotsylvania County, Virginia between April 30 and May 6, 1863.  Union forces were under the command of Joseph Hooker and Confederate forces were under the command of Robert E. Lee and Stonewall Jackson.  133,868 Union troops were involved and 60,892 Confederates fought.  Union casualties were 17,197 and Confederate casualties were 13,303 for a total of 30,500.  Over 3,200 soldiers lost their lives during the course of the battle.

The Battle of Chancellorsville was a Confederate victory.  General Lee viewed this as his “Perfect Battle” because he was able to defeat a much large force through deft maneuvering and skillful use of his troops.  Confederate celebration was muted, however, due to the loss of General Stonewall Jackson, one of the South’s greatest commanders.  The Union is often cited as having lost the battle through the indecisiveness of its generals.  The rifts created in the Union command would last for months and this battle effectively ended General Hooker’s Chancellorsville campaign.

The outcome of the battle was inconclusive; however it did allow Grant to move his army one step closer to the siege lines of Richmond and Petersburg.  The sheer number of casualties, however, made this battle the costliest of Grant’s overland campaign.  The large number of men lost on the Confederate side, however, was harder to bear due to the South’s lack of men and resources.  This forced the southern forces to weaken other strategic locations throughout the south in order to reinforce General Lee’s army.

The Battle of Chickamauga was fought between September 19 and September 20, 1863 in Catoosa County and Walker County in Georgia.  Union forces were under the command of William Rosecrans and Confederate forces were under the command of Braxton Bragg.  Around 60,000 Union troops were involved and around 65,000 Confederate troops.  The Union lost 16,170 men while the Confederates lost 18,454 for a total of 34,624 casualties.  Over 3,900 Americans lost their lives over these two days.

The Battle of Chickamauga was a Confederate victory because Bragg was able to drive the Union army back from its assault and to push them into a besieged position around Chattanooga.  Unfortunately, Bragg was not able to cement his victory by capturing or destroying Rosecrans army.  General Rosecrans was soon removed from his position due to his shattered morale after the battle.

The Battle of Gettysburg was the costliest of all battles during the American Civil War.  It was fought between July 1 and July 3, 1863 by 93,921 Union troops under the commands of George G. Meade and John F. Reynolds and 71,699 troops under the command of Robert E. Lee.  The Union suffered 23,055 casualties and the Confederates 23,232.  During the three days which the battle raged, 7,863 American lives were lost.

The Battle of Gettysburg was a Union victory and effectively ended General Lee’s second invasion of the North.  It is seen by many as a turning point in the Civil War which eventually led to the Union victory.  It was also the location of President Abraham Lincoln’s famous Gettysburg Addresswhich redefined the purpose of the war as an effort to preserve the Union and ensure freedom for every citizen of the United States. 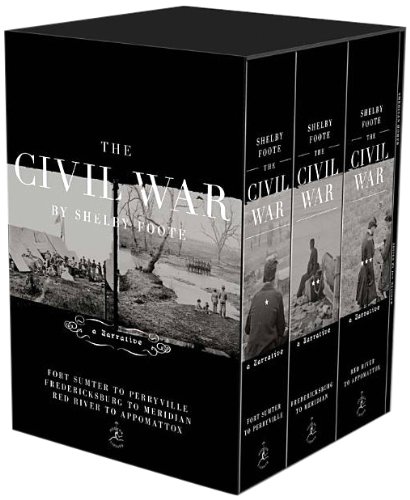 The Civil War Trilogy Box Set: With American Homer: Reflections on Shelby Foote and His Classic The Civil War: A Narrative (Modern Library)Amazon Price: $115.00 $50.85 Buy Now(price as of Jun 2, 2014)
If you're interested in learning more about the American Civil War, Shelby Foote's trilogy has long been recognized as the most thorough and accurate history of the conflict. This set contains all three volumes in the trilogy and would make a great addition to the library of any civil war enthusiast.
Next >> The Columbus Hoax: Who Really Discovered America?