Not All Princesses Are Created Equal - The 6 Forgotten Disney Princesses

The Disney Princesses are an elite group of beautiful animated females. They range from the original Disney princess Snow White to the recently added Merida from Brave as well as 8 other lovely ladies. You would be hard pressed to wander into the young girl section of a store and not see these princesses plastered all over t-shirts, coats, and even underwear. As Disney makes a huge amount of their money from merchandising, they have to be particularly picky about who they let into this girls club. It is quite possibly the most elite fictional sorority in existence. However, Disney has quite a few royal ladies that you won't see on any shirts. The following Disney princesses are no less royal than the others, but still considered inferior.

The term princess can be used rather vaguely when it comes to Disney. For example, Mulan a member of the Disney princess merchandising club has literally no connections to the royal family, like, at all. Yet she is still a princess.

Maid Marian is not really a princess either, but she is actually more royal then Mulan. Maid Marian is a the King's niece officially, so there some royal blood in there. So why isn't Maid Marian a princess? Because she is a fox, obviously. Not in the metaphorical sense either, in the literal one. She is not a pretty girl, she wears more clothes (and plainer ones at that) than Disney merchandise would like. All around, she may be more royal than Mulan, but having a fox head on a Barbie doll is definitely not good for business.

Princess Eilonwy from The Black Cauldron

Eilonwy, at a glance, has everything it takes to be in the elite of Disney princesses. She is pretty, she has that damsel thing going on, she wears acceptably nice clothes, she is a human female, and blood related to a king. So why isn't she one? Well, among looks, Disney also discriminates against movies that did not make a lot of money. Poor Eilonwy really gets the wrong end of the stick. First she is transformed into the traditional damsel in distress unlike her character from the book she was based on which was stubborn and strong-willed. Then they make her story into one of the worst flops in Disney history. Which is why readers are like, "Princess who from the Black what?"

She was made with all the right stuff to join the elite club, but she got dinged for her background. It happens everyday.

However, like in the case of Maid Marian, animals are not fit for being merchandise princesses. Maid Marian could have had a shot, but not poor Faline. Deer can't wear pretty dresses, shouldn't wear makeup, and do not make good dolls. Animals are just so unfashionable.

Nala from The Lion King

Speaking of the Lion King, Nala was a princess, officially. She was Simba's mate and he was destined to be king, so thus she must have been a princess. Also, for anyone that knows anything about lion breeding habits, lions have one male that breeds with many females. So there is also that possibility that Nala was also Mufasa's daughter, thus making her a princess. This also makes her relationship with Simba kind of creepy, but they're animals, not humans.

It's too bad that animals don't make good material for princesses in Disney's eyes. Nala would have been a fairly decent role model. Aside from being a lion, she is strong enough to beat Simba into shape and makes him man up and return to his responsibilities.

While Megara from actual Herculean lore is actually royal, Megara from the Disney version is not. However, a surefire way to becoming a sellable Disney princess is to bag yourself a prince. Megara's catch-o-man was a child of the two ruling Greek Gods, at least in the movie he was anyway. So that should earn some pretty good points towards being a princess. Not enough points in Megara's case.

Hercules had mixed profits in theaters, which definitely hurt her chances. However, I believe what ultimately kept her out of the running was her views on love. She was totally against falling in love as her last relationship caused her to lose her soul. And for what? For that man to leave her for another woman! Of course, she did eventually give into love, but who wants a princess that is essentially used (possibly also damaged) goods. Not Disney, that's for sure.

Plus she was extra snarky and a little evil for awhile there. Evil women and women with sarcastic personalities, in the eyes of the Mouse, you are flawed.

Physically, Kida is more than princess material. She has the right body type, a pretty face, all those things that are requirements for being marketable. She actually a princess as well. So much of a princess that she in fact becomes queen at the end of the movie, a big rarity in the Disneyverse. That, many fans believe, is one of the reasons she is not marketed as a princess. Princesses are young and beautiful, queens are old and ugly. Also, possibly evil, which may lead to some commentary on the patricarchical nature of the Disney company.

However, what I believe drags her down is her clothing. It slides right past "pretty dress" into the category of "possibly showing too much skin". Kida also has tattoos, which less liberal minds find as bad. Some believe she was not included in the elite group because she was one of the best warrior women in Disney movies, which is true however a counterargument would be Mulan.

Though like most of her forgotten sisters, the ultimate nail in the coffin of Kida's drift into the obscure is that Atlantis did not do so well in the box office. There are quite a lot of fans of it, but no one really counts It among their favorites. 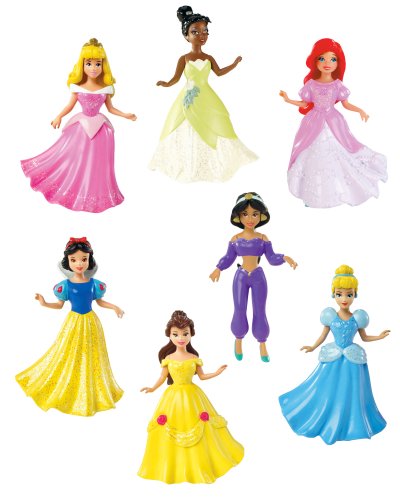