As well as being an avid writer, I am also an enthusiastic gamer, anime fan, movie buff, and love of all things strange. Being as I live with a boyfriend, I am also particularly knowledgeable about cleaning and cooking. You can join me in my adventure of writing for money here at Infobarrel. Sign Up today! Also, I wrote a book! Check out The Guild today!
InfoBarrel is a writing platform for non-fiction, reference-based, informative content. Opinions expressed by InfoBarrel writers are their own.
InfoBarrel > Travel & Places > Places > Barbados

Wonders Everyone Can Enjoy - The 7 Wonders of Barbados

Everyone has heard of the famous Seven Wonders of the World, and as wonderful as they may be, they are spread far and wide across the world. Certainly a visit to all seven is possible in one lifetime or even one trip, but instead of globe-trotting, there are seven wonders that visitors can easily see in one short trip. Nestled in the Caribbean, Barbados is known not just for their white sand beaches lined with turquoise water, but also for their number of historical, architectural and natural sites that make the island unique. In the interest of assuring that sight-seers to the island never miss their best attractions, the government created the Seven Wonders of Barbados list.

Visiting these seven wonders make sure that visitors see the island of Barbados at its best and get an accurate experience of all the culture in between.

Harrison's Cave lies in the heart of Barbados and is by far the island's most popular attraction, natural or otherwise. The crystallized limestone cavern is a mighty testament to nature's ability to create its own artwork and beauty without human intervention. However, mother nature in Harrison's Cave is far from finished with its art. The rushing streams and crystal clear pools inside the cavern are constantly expanding and shaping the cave in new ways. While the cavern is filled with hundreds of smoothed limestone pillars, the real showpiece of Harrison's Cave are the white flow stones that drip from the ceiling like thousands of sharp little white teeth. The cave offers long walking tours for the insatiably curious as well as an hour long tram tours for the slightly lazy.

What's so special about a tree? Well, you will know it when you see it. The Baobab Tree is actually two magnificent old baobab trees that have fused together. Alone, the baobab tree has the largest trunk of any tree in the Caribbean, but when these two fused together they made a tree trunk that could rival a Redwood. This large tree can be found in Queen's Park in Bridgetown and is a frequent climbing target for kids who play on the nearby playground. Pictures do this tree no justice, they make everything look small. However, this monster baobab tree takes fifteen adults joining with hands held to wrap around the trunk. The trees are estimated to be around 1,000 years old with a local legend that the seed floated across the Atlantic Ocean from Guinea, West Africa before landing on Barbados and growing into this magnificent natural monster. Barbados has a passion for tall tales, this one being tall enough to match this tree, but who know? It could happen.

Barbados is honored enough to be the home of two of the three remaining Jacobean Mansions left in the Western Hemisphere. Jacobean architecture was the English style of building in the 17th century, named after King James I who reigned from 1603 to 1625. Barbados was settled by the English in 1627 and it is no surprise that they left their mark on the buildings and culture. What is a surprise is that the buildings built in the 17th century have survived this long. The remaining buildings in Barbados are St. Nicholas Abbey and Drax Hall, iconic in their steep gable roofs, grand staircases and window bays lined by mullioned windows. Drax Hall was the estate house of the Drax brothers, one of the largest sugar plantation owners on the island while St. Nicholas Abbey was called home by Sir John Yeamans before he moved to found and govern a settlement in South Carolina. Today, the St. Nicholas Abbey still stays true to one of its past means of wealth - making rum. Those touring St. Nicholas can still buy their own brand of rum, brewed on site, from the gift shop.

Located in St. Andrew's Parish and overlooking the beautiful sea off the east coast, the Morgan Lewis Mill is the last remaining sugar mill on the island. In fact, the Morgan Lewis Mill is one of only two remaining mills in the Caribbean, the other laying on the nearby island of Antigua. Barbados, like almost all of the Caribbean, has had a long and storied history with sugar so the Morgan Lewis Mill is truly a great glimpse into their past culture. It has been restored and is currently maintained by the Barbados National Trust. Inside, visitors can attend demonstrations of how sugar cane was ground down and processed into raw sugar of the age. Guests are even treated to a glass of the sweet cane juice after the cane is ground, but before the sugar is made. This wonder of Barbados is truly a sweet treat for the whole family and a great glimpse of just how powerful wind can be.

There is only one synagogue on Barbados and it is currently in Bridgetown. While many visitors know it as the "famous synagogue," the locals of the island refer to it more fondly as the "bad luck synagogue." The building was originally built in the 17th century, but it was destroyed by a hurricane in 1831. After it was rebuilt it quickly fell into disrepair before it was sold in 1929 to a family estate. It wasn't until 1983 when it was returned to the Jewish community and restored to its former glory. The Nidhe Israel Museum has also become a close neighbor to the synagogue.

Unlike other Caribbean islands like Cuba or the Dominican Republic, the Jewish residents of Barbados did not arrive after World War II, but rather much earlier. Around 300 Jewish settlers fled Recife, Brazil after Dutch persecution and found a safe home in Barbados in the 1660's. Being skilled in the sugar industry, these settlers proved a valuable part in the blooming industry of Barbados, passing on much of their skills to local landowners.

The Caribbean is full of secrets, many still waiting to present themselves. Up until recently, Barbados had a secret of its own - cannons - and a lot of them. Stored in caves, buried under dunes, and littered on obscure parts of the island were cannons from the early settlements of the 17th century. To date, researchers on the island have unearthed 400 old cannons, making the collection on the island the biggest in the world. Cannons Galore, formerly referred to as The Garrison, is where visitors can go to tour all these magnificent guns. Within the old Bridgetown fort, guests can tour its fortifications and see around a hundred of the best preserved models on display or mounted around the defensive towers.

Why did Barbados need so many of these cannons? As history tells, Barbados was at first a key military base in the Caribbean after the British first settled. The British used the armaments stored on Barbados to defend the island and strike out at other islands controlled by Dutch, Spanish and French forces.

As the old legend goes, Barbados is the birthplace of the hefty, but sour grapefruit. Visitors to the island can visit what are recorded as some of the first grapefruit trees on the island (and the world) in Welchman Hall Gully. As the story goes, this gully was once planted with Shaddock and Sweet Orange trees that were brought over from Asia. Through natural crosspollination, something new was born. Originally called the "forbidden fruit," the product was renamed to grapefruit as it grows in odd grape-like clusters and more biblical patrons found the name forbidden fruit off-putting. Now this original Barbados fruit has become a beloved good world-wide. 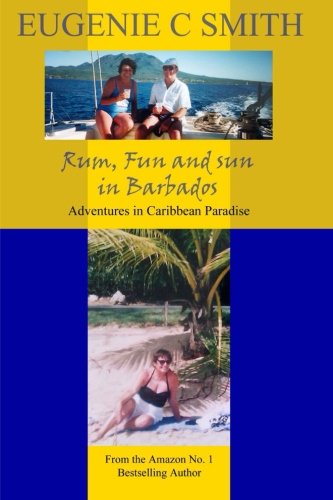 Rum, Fun and Sun in Barbados: Adventures in Caribbean Paradise Amazon Price: $6.65 $6.13 Buy Now(price as of Aug 6, 2016)
Next >> A Punishing Hike to Mt. Ypsilon in Rocky Mountain National Park