“Everything in life is writable about if you have the outgoing guts to do it, and the imagination to improvise. The worst enemy to creativity is self-doubt.” â€• Sylvia Plath, The Unabridged Journals of Sylvia Plath Be fearless. Start writing today for Infobarrel and make $$$ while you're at it.
InfoBarrel is a writing platform for non-fiction, reference-based, informative content. Opinions expressed by InfoBarrel writers are their own.
InfoBarrel > Technology > Science > Biology > Animals

An Intelligent and Playful Sea Creature

The octopus is a fascinating and a most intelligent creature that resides in the ocean. It has two eyes and four pairs of arms, with suction cups underneath the arms. Its lack of skeleton gives this creature the amazing ability to squeeze through tiny spaces. The octopus is highly intelligent, showing evidence of tool usage. For instance, some use discarded coconut shells and seashells and reassemble them as shelter. They have opened jars on boats to eat lobsters, and have even been known to play with items, as seen in an aquarium when an octopus released a jar into a water current and caught it numerous times. There are 300 recognized species of octopus, and there may be many more out there not yet discovered.

Without further ado, here are 8 species of octopus (to celebrate its 8 legs, of course):

The mimic octopus was first discovered in the early 1990s off the coast of Indonesia. This interesting species octopus defends itself by – you guessed it – mimicking other creatures. It is the only creature known to mimic such a wide array of animals, taking both the shape and movements of different sea creatures.

This type of species is smaller than average, growing to roughly two feet, 25 inches with tentacles included, and a diameter approximately to a pencil. Naturally, this species is light brown, but normally takes a striped white and brown color to scare off predators.

Reputedly, they can mimic up to 15 species. Some of their more common mimicries include lion fish, sea snake, flatfish and jelly fish. Let’s hope they don’t get too familiar with humans; who knows what they could do with such knowledge!

The common octopus resides commonly off the coasts of the eastern Atlantic and southern England. They are notable for their bulbous head and protruding head. More intriguingly, the common octopus has shown incredible intelligence in its resourcefulness in attracting its prey and warding off predators.

This species ranges from 12 to 36 inches and has a lifespan of 1 to 2 years. They can hide in plain sight by matching the colors and patterns of its surroundings. They can also release a cloud of black ink at its predators, blocking the predator’s sight and swimming away. This fascinating creature can swim at a fast pace by expelling water through their mantles. The common octopus collects crustacean shells to construct fortresses around their lairs.

The seven-arm octopus wasn’t discovered until 2002, when it was accidentally fished up off of New Zealand in the Pacific Ocean. They are one of the largest species of octopus known, growing to around 13 feet and weighing around 150 pounds.

This aquatic species is so-named because it appears to have only seven arms. The eighth arm is very difficult to notice, hidden below the eyes in a sac. The giant octopus is located off more temperate areas, particularly along the North Pacific Rim. As per its name, they are known for being the largest species of octopus. The largest one to date was 11 feet (3.3 meters) and weighed 156.5 pounds. They can be identified by their distinct wrinkles and folds over their body. 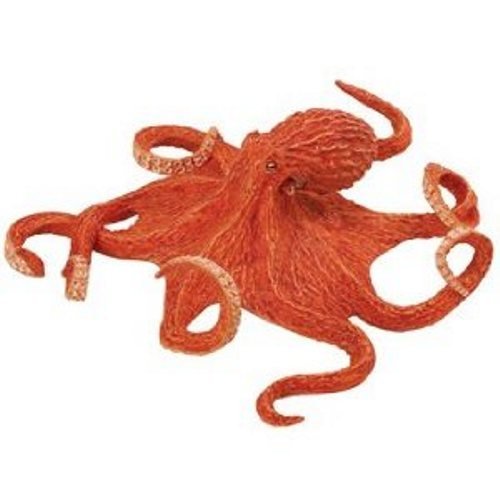 In contrast, the octopus wolfi is the smallest known species of its kind, weighing only a gram. These creatures are only 1.5 cm! They can be found in the Indo-Pacific Ocean. Little is known about these tiny creatures, although the males have a “fringe” along the rims of their suckers. I wouldn’t mind carrying around one of these as a pet, in a tiny little bottle. So cute! Grimpoteuthis, nicknamed as “Dumbo octopuses”, live at extreme depths below sea level. They have been found 3,000 to 4,000 meters (or 9,800 to 13,100 feet) below the sea, and some even live 7,000 meters (23,000 feet) below sea level, the deepest of any known octopus. They have been found worldwide, particularly around Australia. They average in sizes of 8 to 12 inches. The largest recorded was 5.9 feet, weighing 13 pounds.

These creatures are nicknamed for the large ear like fins that protrude from the mantle, just above their eyes. Another notable feature is the tentacles, which spreads out its tentacles to look like a skirt that fans out around its body.

The Caribbean reef octopus resides in the warm coral reefs around Central and South America and the Pacific Ocean. Its arms and legs vary in length, although the mantle is large, growing up to 24 inches long.  They have been difficult to describe in terms of color because of its ability to change color. This species of octopus is noted for its wide range in colors, from a crimson to green. The octopus usually pictured in its beautiful bright blue hues.

This species is somewhat of a “loner” species, staying away from other octopuses of the same species, unless it is seeking to mate. They are passive creatures that keep to themselves, but have been known to show cannibalistic qualities if kept too close to one another in captivity.

The blue-ringed octopus resides in coral reefs and tide pools of the Pacific and Indian Oceans. They are known as one of the world’s most venomous marine animals. The blue-ringed octopus is the only octopus known to have venom toxic enough to be deadly to humans, potentially killing them. This species carries enough venom to kill 26 adult humans in minutes! Victims often do not realize they have been inflicted with venom since their bites are small and painless.

The blue-ringed octopus is smaller than average, ranging from 5 to 8 inches. They are easily distinguishable, with their blue and black rings and yellowy skin.

Octopuses are fascinating and incredibly diverse. These are only a few of the different species of octopus, but there are many out there that will astonish you with their capabilities and characteristics. With their three hearts and eight legs, they are resourceful, intelligent and full of heart (literally). The octopus is definitely a creature to be feared and respected.