The Absolute Best Camera Flash for Your Money

I spent over ten years using Canon equipment and am in my first year with Nikon. Both companies make great speedlites/speedlights (flash units), but at a premium price. If you're like me you are using flash on-camera, off-camera, set up in weird spots for accent lighting, here there and everywhere. Trying to get creative and using flash often puts the unit at risk of being dropped, kicked or knocked over. When that flash costs $400+ that becomes a problem.

My first third party speedlites were a set of Yongnuo brand flashes. They were great and I used them for years with minimal issues. I am still a big Yongnuo fan, but have recently discovered my new favorite flash units - the Godox v850 and v860. These units are powerful with some key new features; and they're CHEAP!

I use two different units from Godox - model v850 and model v860. The difference is very simple: the v860's include E-TTL while the v850's do not; they are manual only units. I use the v860's on-camera when I want a quick and easy auto mode and I use the v850's off-camera (usually on light stands) and manually select my power output. The v860's can also be used off-camera in either ETTL (auto mode, but only with a transmitter that supports ETTL transmission) or manual mode.

Now compare the $200/$125 price tag to what Canon and Nikon offer. A similar unit from the big brands will run around $400 each. That is a huge difference, especially when you're buying six or seven units like I am. The lesser price tags also makes me less stressed when a unit falls over. During portrait sessions, I often forget to bring a sandbag for my light stands. On many occasions I have had umbrellas or softboxes catch a little too much wind, causing the light stand to topple over while I helplessly witness my speedlite hit the ground. A $200 replacement is much easier to stomach than one that is $400+.

With such a small price tag, there must be a power difference between the Godox and Canon/Nikon, right? Well, no actually. The Godox and comparable Canon/Nikon units have guide numbers (GN) of 58. To keep it simple, the guide number is basically a formula to calculate how many feet away a subject can be and still be exposed properly at ISO 100 and full power on the flash. The larger the GN the more power the flash is considered to be. A GN of 58 is considered strong for speedlite type flash units. Larger strobe lights are used when a GN of over 58 is needed (or, you can fire multiple speedlites together to increase your light output).

This is a huge advantage for Godox and the reason I switched to them from Yongnuo (which is also a great third party speedlite maker). Canon, Nikon and my formerly beloved Yongnuo's all use AA batteries. Godox is the first to use lithium-ion batteries in speedlites. The benefit? The batteries last much longer (over 600 full flash "pops" for the Godox), no fumbling with a bunch of AA batteries, and recycle times are much lower. On full power, my Godox unit's recycle time is about two seconds. At half power or lower the recycle time is nearly instant. I expect to see more flash makers to incorporate lithium-ion batteries in the near future.

Godox offers an optional flash receiver (FTR-16s) that snaps into the side of the flash unit. These receivers allow the flash to be triggered off the camera through the FT-16 transmitter. What I like about these receivers is that they do not require any batteries - they plug directly into the flash unit, which is where they receiver their power. They are also very small and low profile. If I could just make one suggestion to Godox - next time make these receivers a permanent fixture in the flash. That would mean no fumbling around to find the small receivers and the risk of losing them.

The only complaint I have against Godox's FT-16 transmitter is that it lacks a hotshoe to add a flash on top of it. For wedding receptions, I will often have a transmitter on my camera and a speedlite on top of the transmitter. This allows me to add some fill flash for shadows that are cast from the off-camera lights. During portrait sessions I generally do not use an on-camera flash, so for these instances the FT-16 is just fine.

One more detail I will add about the Godox FT-16 transmitter that is fabulous - you can use it to remotely control the power of the off-camera flash units. Simply select which flash group you want to change on the transmitter, adjust the power and wah-lah, the speedlite way up on the light stand that is a pain to access has just had its power settings changed.

The Godox v850's and v860's are just as powerful as the Nikon/Canon units, come equipped with lithium-ion batteries that provide more power than AA's and quicker recycling time, have small receivers available to snap into the side of the flash unit, and cost half the price. I have been using these units for over six months now and I could not be happier! With so many quality third party speedlites hitting the market, photographers have more options than ever to invest in flash systems at a fraction of the price. Will this lead Nikon and Canon to respond with lower pricing? Maybe, but I honestly do not care - I am happy with my Godox units. 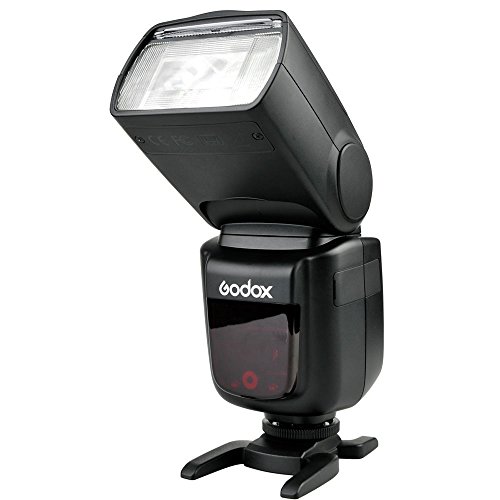 Godox VING Rechargable Battery Speedlite E-TTL Flash V860C for Canon TTL DSLR Amazon Price: $168.98 Buy Now(price as of Jun 8, 2016)
The Godox v860's come in Canon or Nikon format. The Godox v850's are manual only and can be used with either brand of camera.
Next >> Best Camera Lenses for Beginner Photographers