It would seem that these birds have been kept as pets for thousands of years. The hieroglyphic scripts of the Egyptians clearly depict pet parrots. Parrots were also kept by the ancient Greeks and Romans. More recently, King Henry VIII had an African grey as a pet.

It is a native of West and Central Africa. It is found in primary and secondary rainforest.

Of the two species, the Congo is the larger. They have light grey plumage. The tails are a cherry red and the beak is black. They are about 33cm long. The Timneh is smaller. The plumage is darker and the tail is a dark maroon. The upper mandible or beak is a light, horn-colour. 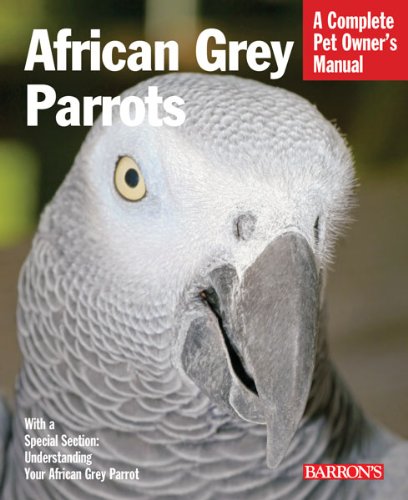 African Grey Parrots (Complete Pet Owner's Manual)Amazon Price: $8.99 $4.93 Buy Now(price as of Aug 11, 2013)
These birds are noted for their ability to speak. All aspects of its care are addressed here. Written primarily for prospective and inexperienced owners.

African greys may bond with one person if they are not socialised regularly with others. They can be timid with strangers. Being very intelligent birds they need constant stimulation and diversion if they are not to get bored. Bored birds get into mischief or develop bad habits so rotate their toys from time to time. African greys are quick to learn and mimic repetitive electronic sounds such as video games and the ring of a telephone. Even the sound of a tap dripping will be learnt and added to their repertoire.

In the wild it nests in the hollows of large, old trees. Its natural diet consists of palm nuts, fruits, seeds and other nuts. In a captive situation it is necessary to ensure they have food rich in calcium and vitamin A. Leafy greens and almonds will help supply some of their requirements. Be careful about giving manufactured supplements as too much in the way of vitamins and minerals will cause its own problems. 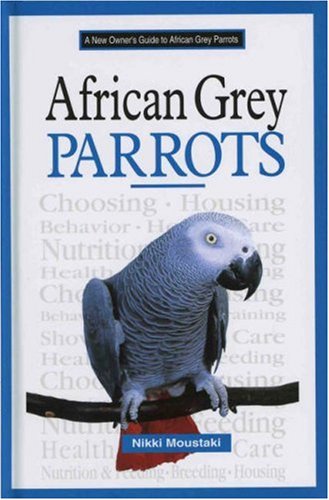 As aviary birds, they are affectionate and intelligent. As already stated, they are good mimics. However they can be unpredictable and it is best to keep then away from small children. The bite is painful and their claws can also cause nasty scratches.

If not hand-reared, they take quite some time to become tame. All aviary parrots need a lot of attention. Because this species is so intelligent, they need at least three hours a day out of their cage. If they are not kept stimulated and occupied, they are liable to start feather-picking.

African Greys are best kept by specialist breeders. They are not an easy species to breed in captivity. They form a strong pair bond and best results are obtained by placing a pair in its own aviary. They may roost in the nest during the non-breeding season.

Beeeding can be influenced by the size and type of nest box that the parents were reared in. Offer a choice of boxes and/or logs in a variety of sizes and let the birds choose. African Greys nest from August to February. Place the nest in a shaded area and high in the aviary but not so close to the roof that it becomes too hot. The box or log needs to have a length and depth of 50 to 60cm. Place the nest at any angle from 45o through to almost vertical. In the wild, the nest will have a natural lining of wood chips and perhaps rotted vegetation.

African Greys lay one clutch of three eggs. Incubation takes about 26 to 28 days and the chicks fledge in 13 weeks. It will be another 12 weeks before they are truly independent.

If you want to clip their wings, don't clip them too short. The African grey is quite heavy and if the wings are too short, he may crash quite heavily. Let young African greys learn to fly really well before clipping their wings. Some breeders believe that Timnehs learn to talk at an earlier age and are less nervous of strangers and new situations. The lifespan can be fifty years or more in captivity.