As well as being an avid writer, I am also an enthusiastic gamer, anime fan, movie buff, and love of all things strange. Being as I live with a boyfriend, I am also particularly knowledgeable about cleaning and cooking. You can join me in my adventure of writing for money here at Infobarrel. Sign Up today! Also, I wrote a book! Check out The Guild today!
InfoBarrel is a writing platform for non-fiction, reference-based, informative content. Opinions expressed by InfoBarrel writers are their own.
InfoBarrel > History

Strong, resourceful, fearless, and, in Wonder Woman’s case, has a rope trick for every situation – when it comes to the ideal of a strong woman, the Amazons perfectly embody it. For every female athlete that wants to go the distance, every business woman that wants to climb to the pinnacle, and every little girl that aspires to be more than a wife and mother, the Amazons are the perfect role model. Unfortunately, not counting the nomadic Scythian matriarchy that may have inspired them, the Amazons of Ancient Greece are myths.

Why, when there are so many real wonderful women throughout history, aspire to an ideal that is mythical? One written by Athenian men that psychologists suggest had some very “Freudian” neurosis that inspired the Amazons, if you get what I mean, especially when there were real Amazons out there.[3] Not ones from ancient history, not ones from Greece, but rather a group of wonderful warrior women from Africa that fought colonial scum as late as the 1890s.

Initially created in 1645 by King Ada Honzoo in the West African kingdom of Dahomey, these African Amazons were not originally meant to be the front line shock troops they would become. Instead, they were created out of necessity. A group of strong women were assembled to effectively and efficiently hunt elephants while the men were away with their warring. History can’t quite agree on what eventually upgraded them to actual soldiers, but some believe it was a lack of overall manpower while others believe it was their sheer efficiency at hunting. Regardless, Ada Honzoo eventually had this group of women promoted to his personal bodyguards, expanding their ranks to 800-strong.

By the male army of Dahomey, they would become known as N'Nonmiton in the Fon language, which translates to “Our Mothers”. The women themselves referred to their ranks as the Ahosi, or “King’s Wives”. After seeing them fight, it was the Europeans that gave them the names Amazons, occasionally referring to them as the Amazon Women of Black Sparta.

Armed with an array of spears, bows, war clubs, and eventually flintlock muskets, Honzoo grew increasingly impressed with their sheer ferocity when carrying out his orders. He eventually expanded their ranks even further to 4,000, placing them on the front lines of his constant wars.

Honoring their origins, the Dahomey Amazons named their first battalion the Elephant Destroyers. Their second battalion became known as the Reapers who, instead of using the flintlock muskets of their sisters, went into battle with three-foot long machetes for a more satisfying murdering experience.

Unlike Dahomey men, who were often conscripted for service, the Amazons were made up of, primarily, volunteers. Women who were sick of cleaning, cooking, abusive husbands, or popping out babies enlisted in their ranks. Women from poorer villages who sought adventure and glory also turned up too. The ranks were also occasionally filled with the king’s concubines that either weren’t satisfactorily pretty any more or failed to produce a son. However, the Amazons also presented an outlet for women that were deemed too wild to become a good wife, though the rowdiest women often made the best warriors.

Of course, once a woman joined the Dahomey Amazons, she became off-limits sexually. Each woman in the ranks was actually officially married to the king, though he never slept with them (that’s why he kept the prettier ones for concubines). If a male solider violated the hands-off order, the punishment was swift death for touching what is technically the king’s own wife.[2]

While the Amazons enjoyed a number of perks and protection under the king, their life was anything but easy. In order to prepare for battle and win, the women all underwent a grueling training regimen. As they were considered an elite unit and often the first into battle, their training actually went above and beyond what the average male soldier would have to go through.

During the average day, the Dahomey Amazons would undergo weapon combat with each other, wrestling, long periods of calisthenics, and long runs in the sweltering heat. As training went on, one of their tests was to climb a 30-foot wall covered in thorny brambles to completion without showing any signs of pain. Later the women would take a page out of the Spartan book and be sent to live alone in the wilderness for nine days. Although significantly less time than a Spartan boy would spend learning survival, they also didn’t have to contend with leopards and lions carrying them off as they slept, crocodiles attacking them when they went to get a drink, and territorial buffalo and elephants that charged when they got too close. So nine days is still pretty tough.

Finally, before actual combat, the Dahomey would use prisoners of war in live-fire combat training. Arming the POWs with clubs and hiding them behind a stockade, the women were tasked with charging, assaulting, and killing every enemy they could possibly catch.

This intense training regimen was created in the very early days of the unit before the women became as respected as they would be in later years. Competition was constant with their male peers, and if these women wanted to be taken seriously, they needed to train twice as hard.

As the Dahomey had a relatively small kingdom in what is now Benin in West Africa, they had to constantly defend their lands against the other small kingdoms that surrounded them. With the combined might of both a male and female army, they were able to do so with ease, crushing any enemy in their path.

In their service, the Dahomey Amazons took up the motto of “Conquer or Die” on the battlefield. Unless expressly ordered by their king, they would not stop and they would not flee. In their dedication, after conquering a city, while the men were pillaging and the king was meeting his new subjects, the women warriors would be in the forests hunting down any enemy soldiers that fled the battle. If they caught them, they would be dragged back by the hair to the city where the women would spend the next few days cutting off ears, popping out eyes, and removing fingers at their leisure. After four days, he would be taken before the king and decapitated.

Because of the murderous fury of the Dahomey Amazons, the king was actually able to make a throne of decapitated skulls from his defeated enemies. By 1727, the Dahomey had conquered the kingdoms of Savi, Whydah, and Okeadon (the battle that got the bulk of the king’s throne materials). They had so many prisoners of war that they ended up sacrificing 4,000 of them to the Voodoo gods.

This would go on as usual until the 1850s. The current king of the Dahomey, Gezo, had expanded the ranks of his women warriors to 6,000, which was roughly half his forces. With them at his disposal, he was able to capture present-day Benin, a good bit of Nigeria, and, most importantly, several seaports. At this point, Gezo and the Dahomey began to sell their prisoners into slavery to visiting Europeans.

Where it All Went Wrong

As is the case with almost every great African civilization, the Dahomey would eventually bite off more than they could chew. In 1890, the current king, Behanzin, was still continuing the kingdom’s tradition of might makes right, but eventually he set his eye on another port city that was moving into the slave trade. Naturally, to capture it, he sent in his Amazons. This is where the story gets sad, right? Not quite yet. The port city was actually a French protectorate, but the Amazons still captured it. When they reached the governor’s palace, he stood clutching the French flag, stating that “it would protect him.”

The Dahomey Amazon cut off his head, made his wife wrap it in the French flag, and took the sack back to their king.

Naturally, after losing a lucrative slave port, the French declared war on the Dahomey. The kingdom responded to it by charging the French city of Cotonou. During this time, the Amazons were still using outdated flintlock muskets, which did little against the gatling guns and cannons on the walls. Fortunately, being the chivalrous sort, the French soldiers were slightly hesitant to open fire on a group of ladies. At least they were, right up until they ran up to the wall, began to rip them apart with their bare hands, and fire at them through the gaps.

Several French soldiers would go onto write about the attack, detailing their friends being beheaded with one swing, and one particular incident where a soldier knocked the weapon out of an Amazon’s hand, to which she responded by tackling and ripping out his throat with her teeth.[1]

With her teeth, guys.

Unfortunately, the battle became a wash when the French started firing on the Amazons with their gun boat. The women were ordered to retreat.

Although that first battle was a defeat, the war was far from over. In 24 pitched battles from 1890 through 1894, the Dahomey persisted. Yet, in the end, machetes, old muskets, and throat ripping were no match for the modern armaments of the Europeans at the time. King Behanzin was driven into exile and his 6,000 Dahomey warrior women were decimated after throwing themselves against modern weapons. Only around 50 of the 6,000 lived after that war, and only because they were protecting their king’s person. Some went home, but the majority actually ended up going to the United States to join, oddly enough, Buffalo Bill’s Wild West Show. 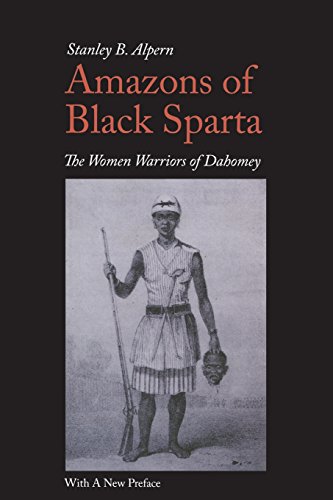