Indian Summer is an InfoBarrel author with an interest in personal finance and travel.  In 2008 he completed a north-bound thru-hike of the Appalachian Trail under the same name. If you are interested in writing online in a great community InfoBarrel is the place for you.  You can find out more about this community by following this link.
InfoBarrel is a writing platform for non-fiction, reference-based, informative content. Opinions expressed by InfoBarrel writers are their own.
InfoBarrel > Travel & Places

The Appalachian Trail: A Footpath for Those Who Seek Fellowship with the Wilderness

Winding its way up the eastern half of the United States is a 2,100 mile long corridor of national forests, state parks, and national parks.  Connecting all of these together is the Appalachian Trail.  Considered by many hiking enthusiasts to be the “granddaddy” of all long distance foot paths, the Appalachian trail holds a place in the hearts of many Americans as the embodiment of adventure and the frontier spirit that helped make their country what it is today.  For, to hike on the Appalachian Trail is to experience America’s past and present, and to catch a glimpse into its future.  Many come for the experience and few leave untouched by its grandeur.

The Appalachian Trail winds through fourteen states and is over 2100 miles in length.  The exact distance that it covers has been measured many times, however the trail changes in length each year as old sections are moved and new sections are built.  It tends to grow longer as the years pass.

Traversing the states of Georgia, North Carolina, Tennessee, Virginia, West Virginia, Maryland, Pennsylvania, New Jersey, New York, Connecticut, Massachusetts, Vermont, New Hampshire, and Maine, the trail winds through towns and villages, fields and pastures.  However, the great majority of its length is in the forest.  In fact, it is this aspect that gives rise to one of the trail’s many nick names:  “The green tunnel.”  As it wends its way through the east-coast states, the path summits hundreds of mountains, crosses dozens of rivers, and intersects with over 2000 roads.

The entire length of the Appalachian Trail, or “AT” as it is affectionately known, is maintained by the combined efforts of thirty “trail clubs.” These clubs ensure that their individual sections are clear of deadfalls, washouts, trash, and other hazards.  All of the work put into maintaining the trail is done by volunteers and each year they contribute more than 600,000 hours to the cause.

These thirty trail clubs are all under the supervision of the Appalachian Trail Conservancy which coordinates efforts and acts as a go-between between the clubs and the National Parks Service which is the government body in charge of the trail.

"The Greatest Trail Ever Built"

The Appalachian Trail[2] was the brain-child of Benton MacKaye, a forester with dreams of social engineering during the 1920’s.  It is rumored that during a hike in the Green Mountains of Vermont MacKaye was struck with the idea for a “grand trail” that would connect the major mountain areas of the Eastern United States.  This was to be no ordinary hiking path.  In addition to hiking as a recreational pursuit the trail was to have work camps scattered along its length where dwellers of the crowded nearby cities and towns could escape their daily drudgery in the mills and factories.  At these work camps they would be exposed to clean air, sunlight, and nature in all of its glory.  This exposure was intended to improve the moral of the country’s new working class.

In 1922 MacKaye’s idea was published by Raymond Torrey in the New York Post.  This published article lead to the first few miles of trail being constructed around the Hudson River in New York during the early 1920’s.  Unfortunately, interest began to wane before the trail was able to grow to more than a few miles in length.  In 1929 another outdoor enthusiast, Myron Avery began to work with the newly formed Appalachian Trail Conservancy.  Where MacKaye was the dreamer, Avery became the builder.  Between 1929 and 1937 Avery oversaw the construction of the remainder of the trail from the then southern terminus on Mt. Oglethorpe in Georgia to Mount Katahdin in Maine.  Much of the construction was done by workers employed president Roosevelt’s Civilian Conservation Corps.  In August of 1937 the final section of trail was completed near Sugarloaf Mountain in Maine.

Shortly after the completion of the trail the United States entered into World War II.  With the majority of its manpower oversees or working in war-production industries at home, little attention was available to be spared for the maintenance of hiking trails.  Gradually the forest began to creep back in and devour the newly finished pathway.

World War II was eventually won, however, and it was a returning veteran by the name of Earl Schaffer who helped revitalize interest in the trail.  In 1948 Schaffer became the first person to hike the entire length of the trail in one year.  This accomplishment, which is now known to trail enthusiasts as “thru-hiking”, was publicized around the country and began to bring much needed dollars and man-power to the trail clubs charged with maintaining the footpath.  Earl Schaffer later published a book recounting his adventure entitled “Walking With Spring.” 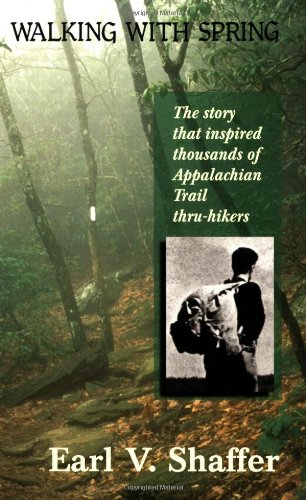 In 1958 the southern terminus of the AT was moved from Mount Oglethorpe, Georgia twenty miles to the north to Springer Mountain.  This was due to encroaching development around the mountain.  Specifically the move was initiated because of the construction of a road and a new collection of chicken farms on the mountain.

In 1968 the National Trails Act officially recognized the A.T. as an important footpath to the American people.  It became protected by law and was moved under the jurisdiction of the United States Forest Service.  The Forest Service began working in conjunction with the Appalachian Trail Conservancy and their partnership continues to this day.

There have been many other changes to the trail route over the years, but as the decades have progressed, the Appalachian Trail Conservancy and the Forest Service have worked to move the trail onto public lands.  Through route alterations and land purchases they have largely succeeded.  Today over 99 percent of the Appalachian Trail is protected on state or federal public lands.

Thru-hikers on the Appalachian Trail

When Earl Schaffer completed the first Appalachian Trail thru-hike in 1948 he started a tradition that would slowly grow through the years.  At first only a few people per decade would follow in his footsteps.  Later as the outdoor movement of the 1980’s grew and was carried over into the 1990’s and 2000’s the number of thru-hikers grew to several hundred each year.  Today, hundreds of new hikers complete the trail yearly and the number is growing.

A person attempting a thru-hike may have many reason to begin his or her adventure.  Many are young people just out of high school or college and are looking for one last adventure before they “settle down” into their adult lives.  Others hikers are between careers, recovering from diseases or addictions, or trying to get in touch with their inner spirituality.  Whatever it is that draws a person into attempting the trek, it is the journey that seems to unite them.  Many successful thru-hikers claim that the most important and memorable portions of their trips revolved around the trail community[3].  It might seem that loners would be the folks most likely to attempt a thru-hike but social people are most likely to finish.

And there are many who don’t finish.  It is estimated that of the thousands of people who start a thru-hike each year, only a few hundred will complete the trek.  Most begin their attempt during the first months of spring from Springer Mountain Georgia.  However, about one in six begin during the months of high summer on Mount Katahdin in Maine.

The reasons for leaving the trail are as varied as those that draw people to attempt it in the first place.  Some do not have the right equipment for a thru-hike.  Others get sick from not treating their drinking water properly.  Some get injured or return home to handle a family crisis.  Many just get tired or do not find what they came to the trail to find.

Those who complete the hike are often filled with a self-confidence and self-reliance that is reached through few other activities.  Many of those successful thru-hikers find themselves returning to the trail year after year.  Some join trail clubs to help with maintenance.  Others become “trail angels” and help out the next year generation of thru-hikers on their journey.  A handful continue to hike the AT themselves.  These “professional” hikers will wind up making the 2,100 mile trip year after year.

The Future of the Trail

For the over 75 years since its completion, the Appalachian Trail has connected people and communities up and down the east coast.  Today, thanks to the protection efforts of the Appalachian Trail Conservancy[1] and the US Forest Service the pathway is better protected than ever before.  Armies of volunteers that would shock even the great builder himself, Myron Avery, work tirelessly every spring and summer to make sure that this national treasure remains open to the American people.  If you should ever be lucky enough to find yourself on this “Footpath for those who seek Fellowship with the Wilderness,” be sure to take the time to silently thank those whose efforts have gone into making the experience available to everyone now and into the future.