The Apparition Review - Where Have All The Good Horror Movies Gone?

You know how on occasion you find that one horror movie that really gets under your skin? Makes you sleep with the lights on and see shadows on the wall. On occasion the right horror movie makes you fear for your life.

The Apparition isn't that movie.

The trailer made horror fans hope it would be since good horror movies have become few and far between ever since the Saw franchise mucked the genre all up with it's pointless gore.

The Apparition follows Kelly and Ben as they start their new suburban life in Kellys' parents' house. Everything seems as boring as the average persons' life until strange things start happening, as they always do. Door start coming unlocked without burglars or keys behind them, weird mold starts growing even though the house inspector said it was mold free, and the neighbors' dog wanders over to die in their laundry room.

You know, sometimes things like this just happen, but this would be a worse movie if this wasn't explained by some crazy apparition.

The movie started off decent enough, if by decent, you mean pretty hilarious to a hardcore horror fan. It had some nice scenes of Kelly in the shower and her underwear. Kelly is played by Ashley Greene who played Alice Cullen in Twilight, so that right there gave men that are getting ready to be dragged to Breaking Dawn Part 2 something to think about during the movie.

However, naked Alice Cullen is about the only good part of this movie. Some horror movies can get completely taken over by the back story, this one barely gives one. Even as they are explaining about the ghostly apparition haunting them, it's basically them saying in a fancy way that they have no idea what it is. Now that's all fine and dandy, but the movie ends without telling you what it is. The ending leaves almost everything unexplained and I for one hope it's not going to spawn a sequel.

This movie contains three hit movie actors, Ashley Greene as I've already mentioned. Tom Felton, who played Draco Malfoy in Harry Potter and Sebastian Stan who played Bucky Barnes in Captain America. The Apparition seems like a strange filler movie in all of their careers, the director must have been banking on the 'kinda big' names filling seats. Maybe instead they should've wrote something other than the old fall back horror movie script.

I don't even know why they keep reusing the premise of The Apparition, there is a long list of failed movies on Netflix that prove it doesn't work. If you're a horror movie director and aren't going to bring something original to the table, don't try. 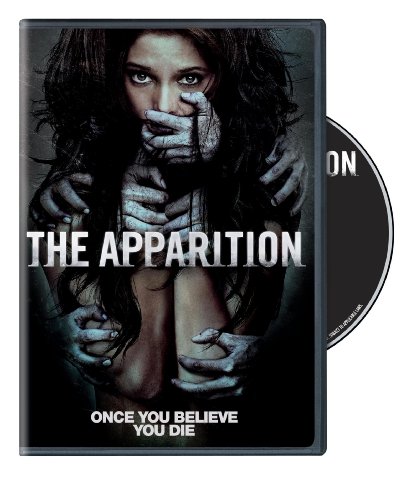