The release of the first Motorola Moto X happened in 2013, with the first model of this kind. This year, we can enjoy a better version of this smartphone, being the second generation of Moto X, with a much improved user interface, internal specifications and lighter design. The new model kept the curved initial shape, but introduced a metal frame, made out of aluminum, and leather rear protection, as an optional choice. Maybe the best improvements, that are were much awaited by fans of this brand was the quad core processor and high clarity display, of 1080p.

This new model was designed to fill the gaps of the previous one, perfecting all of its features in order to obtain a new gadget to compete with the marketâ€™s strong competition. Some may say that the second generation of Moto X is the best release of Motorola up to now and that the company has managed to raise to the expectation of the trend and requirements of modern society, representing a real competitor for all the great names in this business. The new design is more ergonomic and feels really comfortable when hold in hand, despite its rather great dimension. This is due to the fact that the phone is very light. Not to mention that you can find customizable features that you wonâ€™t get in any other smartphone, like rear protection made out of bamboo. It is really a piece that stands out from the crowd. 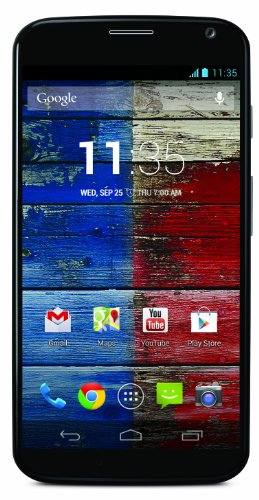 Packed with a frontal 2 MP camera and a back camera of 14 MP, this phone is really ready to face any situation. To match the astonishing look, the new Moto X has hidden under its case a full power quad-core processor, version 2.5 GHz, which can handle almost any task youâ€™ll give it. Because of the large screen and high performances you may be forced to believe that the phoneâ€™s battery is quite challenged and does not have a very large autonomy. Well, to everybodyâ€™s surprise, it manages pretty well, and is able to deliver tasks an entire day.

One of the most important parts of a smartphone, which draws any attention, it is screenâ€™s performances. Since you buy a last generation gadget you really expect for it to have awesome features of the screen, so that you could enjoy every bit of the wonders of the world. And with this new improved model, Motorola managed to deliver exactly that, by equipping it with a nice Amoled screen. The colors are enhanced, shades can be easily spotted and everything looks crystal clear from most angles. The only inconvenience is that you might get a small rainbow effects, if you position the screen under sun light in some angles.

Regarding its performances, the Moto X runs high, alongside with the heavy names of smartphone market, like Samsung Galaxy S5 and HTC One M8. It has even been used to mine Bitcoins. After all, they all have the same heart beating inside them, the powerful chipset named Qualcomm Snapdragon 801. So, no matter how hard you try, there are very few things that really are able to slow down this mean machine. Navigation unrolls extremely smooth, applications can carry on without any issues and time of response is according to any gadget that stands out to win the name of â€œcutting edgeâ€. Therefore, if you ever had doubts or bad experiences with any of the Motorola models, you should know that this one surpasses any of them. For this company this yearâ€™s achievement with the release of the improved version of Moto X is the greatest one, which earned them the name they deserve. Of course, it is not perfect, like many more out there, but its features can really make you proud of owning such state of the art gadget.