The Basic Rules of Rugby Union

The rules of rugby

A game for hooligans played by gentlemen

To the uninitiated a game of rugby looks like a free for all, thirty men fighting over an oval shaped ball. If you've never seen a game think of american football; but without the helmets and the padding. It is in fact a very disciplined game with strict rules of engagement. Understanding the rules of rugby[1] helps to make sense of it all.

A rugby match is contested between two teams of 15 players. The game lasts for 80 minutes divided into two halves with the teams changing ends at half time.

The first thing to understand about the rules of rugby, as opposed to soccer, is you can catch and run with the ball. This is what William Web Ellis famously did at Rugby school establishing rugby as a separate sport. It was at Rugby School that the rules of rugby were first established.

The second important rule is that the ball can only be passed backwards; a crucial difference between rugby and american football.

How points are scored

A 'Try', worth 5 points, is awarded when a team touches the ball down beyond the other team's try line.

The team scoring the try are awarded a kick at goal. Rugby goals are H shaped rather like american football goals. Kicking the ball over the bar between the posts adds 2 more points. A converted try is called a goal. The kick is taken from in line with where the ball went over, so the ideal place to get a try is between the posts.

Rugby is a hard, full contact sport played in a very disciplined way. Putting the other team under pressure can lead to infringements of the rules punished by a penalty. The team awarded a penalty can take a kick at goal. Getting the ball over the bar and between the posts is worth 3 points.

A 'drop goal' is also worth 3 points. A player in open play drops the ball from his hands kicking it as it touches the ground. As for the other kicks the ball has to cross the bar between the posts.

Tackling and the rules of rugby

You can only tackle the player with the ball. Blocking, as practiced in american football, is not allowed. It will be punished with a penalty.

You tackle a player by grabbing them round the waist or legs if possible and bringing them to the ground.  A high tackle, anything around the head or neck will be punished with a penalty.

You must not tackle a player who is in the air.

The player who has been tackled has to release the ball. The player making the tackle must release the tackled player. Neither can play the ball while they are on the ground.

The 'breakdown' - what happens after a player is tackled

Team mates and opponents approaching the 'breakdown' have to stay on their feet. They gather over the ball to form a ruck (also known as a loose scrum).

This is the bit that looks like a free for all but the rules of rugby are strict.  Players can only join the scrum from their own side. They have to come in from behind the feet of the last player. They must not join from the side or from their opponents' side. They must not touch the ball with their hands unless it has been hacked back on their side and is deemed to have come out of the scrum. Any infringements  by a penalty.

If the player being tackled stays on his feet a maul may be formed. The key difference between a ruck and a maul is whether the ball is on the ground or not.  The maul forms round a player who is on his feet and holding the ball. Team mates gather round and push him forwards. The other side will be trying to force him back. You can only join from yare punishedour own side just like in a scrum and once a maul is formed it can not be brought down. Any infringements are punished by a penalty.

The ball can be kicked forward but, until it is touched by the other team, can only be played by the kicker or a team mate who was standing behind him when the ball was kicked.

Kicking the ball forward and charging forward to recover the ball, grab the opponent who has caught it or hack it forward are popular options for gaining ground.

You will also see the ball 'kicked to touch' meaning off the field of play. This gives a line out (rugby's equivalent of the throw in) where the ball went out. But unless the kicker is behind his own 22 meter line the ball has to bounce before going out. If the ball goes 'out on the full' the throw is taken from where the ball was kicked.

The line out is made up of the two sets of forwards in parallel lines jumping to receive the ball put in from the touch line. Jumpers can be lifted by team mates making the line out another of the game's spectacles. 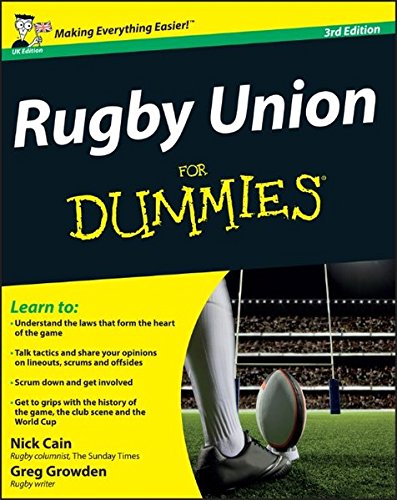 The rules of rugby insist that players must catch the ball cleanly. If they drop the ball and it goes forward the referee calls a 'knock on' and awards a scrum to the other team.

A scrum, one of the key set piece moves, consists of the two sets of forwards, the eight biggest and heaviest players of each team binding together in a set formation and pushing against the other team. The ball is put in by the non offending team and the idea is to hack it back on your own side. The ball can not be picked up until it has come out of the back of the scrum.

There are lots of things that can go wrong in the scrum. Teams can be penalised, among other things, for: not binding properly, standing up or collapsing the scrum, using one's hands.

The team that has been awarded a penalty doesn't always kick for goal.

The rules of rugby say that, if a team are too far away to kick for goal they can opt to 'kick for touch' instead. The team taking the kick get the 'put in'. So this is an opportunity to launch the ball deep into the opponents half of the field and mount an attack. Teams also take this option late in the game when time is running out and three points would not be enough to put them in front or they are so far behind that they need a try to catch up.  Or they may just be a better team confident they can get seven points and don't need to settle for three.

Other attacking options for the team awarded a penalty are: a set scrum (useful if you have a good pack and are yards from the try line) or a tap and go, where you just tap the ball with your foot and run at the opponents line.

You needn't know all the rules of rugby to enjoy watching. The sheer physicality of the game is breathtaking in itself; but understanding some of the rules of rugby will help your enjoyment. I hope I've helped to make some sense of them for you? Your comments would be most welcome.