Special Feature Find Out How to Make a  (Fairly Significant) Online 'On-the-Side' Income through Writing
InfoBarrel is a writing platform for non-fiction, reference-based, informative content. Opinions expressed by InfoBarrel writers are their own.
InfoBarrel > Auto > Motorcycles

The Best Dirt Bike For Beginners

When you want to (or reluctantly) let your kids loose on a dirt bike so they can experience the sheer thrill of riding, you know you need to look for a bike that will work well, while keeping them safe - especially when it is their first model. Or perhaips you’re instead looking for a machine for yourself, you may be looking for one that isn’t too powerful, particularly if you’re a beginner (to have lessons on, or have just finished) - just so you can get to learn the ropes etc.

It can be hard to know where to start looking, but in order to make your search a little easier I’ve included a list of the best models around for (kid & adult) beginners:

This great looking blue ride could be one of the best around right now. Sold for approximately $350, it comes with a great level of safety and a twist grip throttle that lets your child enjoy speeds of up to 12 mph. This beast is strong and powerful leaving similar-sized models trailing behind. Suitable for children who weigh no more than 140 pounds, you should expect to get about 30 minutes continuous use on a fully charged battery. 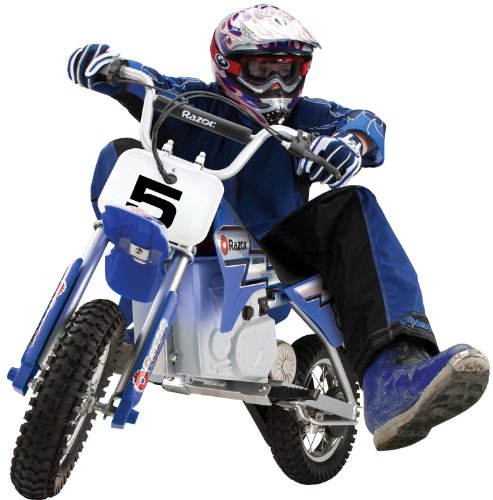 Razor MX350 Dirt Rocket Electric Motocross Bike Amazon Price: $289.99 $196.92 Buy Now(price as of Jan 14, 2016)
If the rider happens to weigh more than the suggested 140 pounds, then he will not reach maximum speed and the battery life will be reduced. The Razor MX350 is however; probably the best of its kind and it will give your children the chance to learn to ride safely while experiencing the joy of riding off-road.

The Motovox 70 cc Dirt Bike is a mean looking dirt bike that comes with 4 gears and a great red and black finish. This kick-start bike runs on gas and will last and last thanks to the solid steel frame that just makes it extra tough. With speeds of up to 25 miles an hour, it’s suitable for children aged 12+ as they should be strong enough to handle it, although guidance and awareness of safety should still be priority. With some mean looking steel rims and front and back brakes, the Motovox 70 cc will be a pleasure to own and use hour after hour, helping your child to get an even better taste of the world of dirt bikes.

Motovox 70 cc Dirt Bike Amazon Price: $799.99 Buy Now(price as of Jan 14, 2016)
With some mean looking steel rims and front and back brakes, the Motovox 70 cc will be a pleasure to own and use hour after hour, helping your child to get an even better taste of the world of dirt bikes.

Please note dirt bikes that are built for adults are obviously much faster and heavier than those manufactured for children, and should only be used by adults.

This is a bit of a mean machine that will no doubt leave other contenders lagging behind. With a great black finish and a two stroke 250cc engine, this New Apollo means business. Sold for approximately $1,399, you’ll be getting a sheer bargain from an impressive  bike that has a triple clamp to make the yoke extra tough. This means you can just about give the New Apollo as much abuse as dirt track riding will dish out, and you should still expect it to work just fine, even after the toughest of races. If you're looking for a slightly less powerful  bike, then you can’t go wrong with the New Apollo 125cc. With 8.2 HP and a maximum speed of 55 miles per hour, this is a great little bike that will do you well. If you’re looking to have a bit of fun and you’re not interested in serious racing, then this could be the one for you. With its green, black and red finish, this bike looks like it means business, and it certainly does. 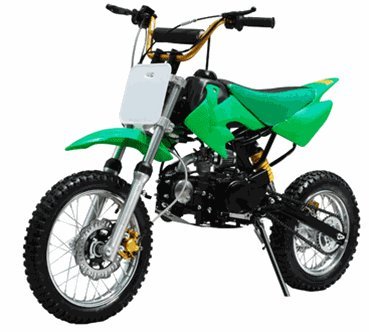 New Dirt Bike 125cc Manuel Amazon Price: $999.00 Buy Now(price as of Jan 14, 2016)
Because you can travel of speeds up to 55 miles per hour, the New Apollo s only suitable for adults who have plenty of off-road space and a thrill for extreme sports. It has brakes integrated at the front and rear, and weighing in at 180 pounds, this bike will be as tough as you need it to be.

Please note prices are subject to change and will vary from seller to seller. These machines are suitable for off-road use only, and should not be taken onto a public road, consult state local laws for more information. Also, if you have any comments, questions or cocerns regarding the overview of the best dirt bike for beginners then please do not hesitate to make them in the comments section that you will find just below and we will be sure to get back to you as soon as possible.