Flour Tortillas and Why I Don't Eat Corn Tortillas.

You've probably not spent a lot of time thinking about tortillas.  You've probably spent even less time thinking specifically about flour tortillas.  I hope that you'll trust me here when I tell you that I have, in fact, spent a lot of time thinking about flour tortillas, and also eating them so that I could then decide just who makes the best flour tortillas available commonly in the US grocery store chains.  Of course you should also take into consideration that this is going to be an opinion piece, but one that also includes some facts, and wasn't just thrown out there for no reason at all.

Listen, I've been spending the best part of fifteen years eating as much Mexican cuisine as is possible.  I'm exactly what is meant when someone thinks of a "American White Boy."  I just fit that description, and fit it well.  Oh I've got some Native American blood in my veins,  we that come from a long line of US citizens often do, and that's regardless of whether we happen to be "white" "black," or otherwise American.  It goes without saying that Hispanics, at least the greatest majority of them, also have a ton of Native American blood or genetics.  The point I'm trying to make here is that I hardly know any more how to cook without everything I make coming out exactly Tex Mex.  I just forgot how to make anything else, and I don't care to remember.  I like what I like.  I like lots of flour tortillas.

That's a great question, and I'm glad it was asked!  There is a LOT wrong with corn, corn in the USA is sixty percent a market of Monsanto, the Merchants of Death, the only company in the world that presumes to make products safe for human handling and consumption, that has never once made a product that was remotely safe for human handling or consumption.  The problem with corn is that almost all of it is modified genetically, and thus, unfit for consumption in swine, much less humans.

It's impossible to totally avoid corn products.  I'll never advise or endorse any of them.  I hope you get the idea here, it's not that I don't like corn or corn tortillas, it's just that it's unwise now in this modern world to ever eat corn.

Monsanto, The Merchants Of Death Make No Food Safe For Human Consumption

Monsanto Corn - Unfit For A Pig

Flour Tortillas - Nobody Makes Them Better Than Guerrero.

Someone once said to me,

Todd, the Hispanic community suffers overly much from diabetes simply because they're always eating so many flour tortillas!

Listen, that might well be true.  I don't know, but what I do know is that a comprehensive survey of demographics and ethnic groups in the United States of America just last year in 2011 stated that the average Hispanic lived to be 83.5 years of age, and that's five years longer than the average Anglo American "white boy" such as myself.  Yes, more salsa, please!

Growing up, my mother always made lots of Tex Mex foods, and she still does.  The problem is, well, there is no problem - but my mother is just as white as June Cleaver from Leave It To Beaver.  So while my late night drunk buddies from fresh out of high school always ask me if my mother still makes those burritos by the dozen that they all recall so well, her foods are more meant to please Mr. Shaw than they are Wesman Todd Shaw.

What I'm saying here is that my mother and father are both overly enamoured with things like Pace Picante Sauce, and Mission Flour Tortillas.  I wouldn't have you thinking that Pace and Mission don't make edible foods, but I'd never want you to think that either of those tastes the slightest bit authentic so far as what real Mexican cuisine actually tastes like either.

I've got more real Mexican American friends than I could ever get around to naming or remembering, myself.  I've spent many an all nighter partying with these folks, and woke up to the smell of their mother's making us all breakfast, and that breakfast usually involved some of the mother's own hand made home made flour tortillas.  I know authentic flour tortillas like I know the back of my own hands.  By the exact same token, I know authentic salsa.

Listen, I thought that authentic tasting flour tortillas were only had in the variety made by hand, and learned from someone who also made them by hand.  Gleefully, it turns out that I was wrong!  I also didn't know that one could buy raw flour tortillas in a store, again, I was blessedly mistaken.  In part of 2010 I lived in Seaside, California, and there at the px of the Fort Ord army base I found raw Guerrero Flour Tortillas for sale, and I discovered that without having to learn to make my own flour tortillas, I could enjoy flour tortillas that taste just as good, or close, as the ones hand made in Kaufman, Texas, by the mothers of my Mexican American friends.  You just heat the darn things up on a skillet, the way you would anything else that was raw and needed to be cooked to eat.  If that's just too much for you, and you want your flour tortillas done in butter to be done much faster, then Guerrero brand flour tortillas can also be purchased already cooked, but needing to be cooked in that grand old fashioned butter to be ready to be served.  What a revelation!  What a blessing!  What a culinary joy!

I've tried every brand I've seen, none are as good as these. 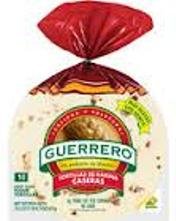