The Best Movies of All Time

Most of us will watch hundreds, or perhaps even thousands, of movies during our lifetime. I have enjoyed many  over the years, but there are a few that really stand out.

This is a list of the best movies of all time.  Of course, this is entirely subjective.   However, if you are looking for a classic film to enjoy this list might be helpful.

If you are a fan of old movies, you likely will recognize some of these. Most of my favorites were made a long time ago.  I believe the quality of films is not what it used to be.

People love and remember movies they saw years ago for different reasons. Some of them, such as To Kill a Mockingbird, have a very powerful message. Others are pure entertainment and fun. I enjoy watching all kinds of different stories, including suspense films that often have surprise endings.

To Kill a Mockingbird

Many people believe this is one of the best movies of all time. It certainly is a profound and very moving story.

The film captures the viewer right from the beginning. The cast is excellent, including the young actors who play Scout and Jem, the children of Atticus Finch.

Thos story concerns a young African American man who is falsely accused of raping a white girl. He is convicted on the flimsiest of evidence. This film deals very realistically with the prejudice that was  common at the time.   It seems hard to believe today, but unfortunately some people did have those attitudes at one time.

A secondary story concerns the mysterious neighbor and recluse named Boo Radley. Many high school students have read the book or seen the movie for English classes.

Harper Lee wrote this outstanding story.  She never wrote another one. She also declined all interviews, despite all the acclaim the story received.

Harper did visit the set while the movie was being filmed, and   she approved of how they adapted it to the screen. Harper Lee became good friends with Truman Capote, and she accompanied him to Kansas while he did research for In Cold Blood.

I have seen this To Kill a Mockingbird many times, and am always affected by it. This is a great addition to any classic tv library.

This was one of the most acclaimed movies of the 1990s. Forrest is a mentally challenged man who lived an extraordinary life. The story is  told mostly in flashback sequences as he relates his story to kindly people at a bus stop.

Forrest ends up becoming involved in the major events of the 50s, 60s and 70s. He teaches Elvis how to dance, becomes involved in the Vietnam war, and unwittingly reports the Watergate break in.

Much of the story is told with humor and warmth.  I believe the message  is that we all have the ability to achieve great things.

It is a beautiful, heartwarming movie with a sweet love story. The music is lovely and perfectly fitting to the theme of the film. Forrest Gump contains humor, warmth, and some sadness. It is a movie that one does not get tired of.  Tom Hanks was excellent in his role as Forrest.

Mary Tyler Moore was known for the wholesome TV characters she played.  The first was Laura Petrie , which was followed by Mary Richards. This was a very different role for her, playing the emotionally distant mother of a troubled young man.

Ordinary People was Timothy Hutton's first major role. He plays Conrad, a young man who had attempted suicide after the accidental death of his brother. He feels responsible for his death, and suffers from survivor's guilt.

His mother, Beth, has suppressed her emotions and tries to carry on as though everything is normal.  His father Calvin is played by Donald Sutherland. He is trying to deal with his emotions, and help his son at the same time.

There are frequent conflicts between mother and son, and Calvin often takes his son's side, simply because he is worried about how vulnerable he is emotionally. The family further disintegrates until there is finally a major confrontation between Calvin and Beth. This is a sad story, but very moving and well done.

A Simple Plan tells a compelling story that is not easy to forget. It makes my list of best movies ever made because it is a suspense film  with many surprising developments and a shocking twist at the end.

A Simple Plan stars Bill Paxton, Bridget Fonda, Billy Bob Thornton and Brent Briscoe. The three men are out in the woods when they discover an airplane that has crashed. They find a corpse and a bag containing millions of dollars.

Jacob and his friend Lou immediately want to keep the money. At first Hank, played by Paxton, says it is a bad idea and that it should be turned in to the police. It doesn't take long before the other two men convince Hank that they should keep the money.

However, Hank  places a condition on keeping the cash. They agree Hank will keep the money hidden in his home for a year. After that time they will divide it between the three of them, assuming it will be safe by that time to do so. They also agree to keep it a secret.

It is a simple plan, and they believe nothing could possibly go wrong. It turned out that they were very mistaken. Hank immediately breaks the promise of keeping their discovery a secret by telling his wife Sarah. He asks her hypothetically what she would do if she found a lot of money, and she says she would return it. Once she sees it is for real, she immediately has a different attitude.

Sarah dreams of breaking away from their dreary life and being rich. Hank is a well respected member of the community, so they all believe no one will suspect anything.

Very shortly afterwards, their plans begin to unravel with terrible consequences. The plot twists are surprising, and there is a very ironic ending. If you like suspense stories, you will probably find this one gripping. The bleak, dreary winter scenes are a perfect backdrop to the story.

One Flew Over the Cuckoo's Nest

Jack Nicholson made some great films, but he's probably best remembered in the role of Randle McMurphy. Louise Fletcher was equally impressive as Nurse Ratched, one of the most memorable villains in film history. They both were very deserving of their Academy Awards.

McMurphy fakes a mental illness, believing it will be easier to spend time there rather than in prison. He and Ratched take an instant dislike to each other, as McMurphy recognizes right away that she is a tyrant.  The  patients in the hospital are terrified of her.

Randle is not a bit intimidated, and he immediately begins to challenge her authority. It is fascinating to watch McMurphy begin to liberate the men. He believes her controlling, aggressive behavior is one that they should not tolerate.  Eventually some of the men begin to agree with him and they start to rebel.

The best scenes in the movie are when Randall manages to escape from the institution and takes the others out on a fishing trip. For many of them, it is their first taste of freedom they have had in a long time.

Randle forms close friendships, and he's inspired when he sees they are beginning to think for themselves. Of course, this does not go unnoticed by the nurse.  She abuses her authority by ordering electric shock therapy and other punishments, in an effort to get the men under her control.

One Flew Over the Cuckoo's Nest is a great film, with humor, drama, and a few gut wrenching moments.

To Kill a Mockingbird 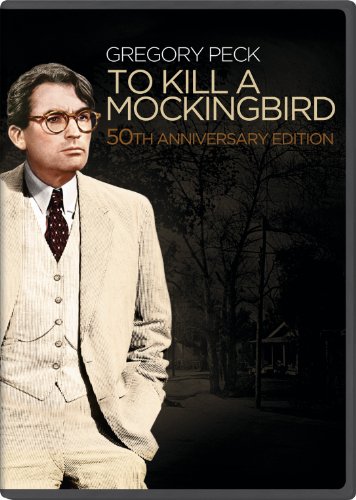 To Kill a Mockingbird 50th Anniversary Edition Amazon Price: $14.98 $7.48 Buy Now(price as of Oct 19, 2015)
I own this DVD and highly recommend it. The special features include interviews with the actors who played the children. This movie is a classic and one that can be watched over and over again.
Next >> Movie Review: The Girl on the Train