The Best Phone Choice for the Average User

All I Want Is A Simple Mobile Phone!

There are tons of mobile phones on the market today, and more devices are being released all the time. Deciding which phone is going to be right for you is certainly a tough choice. Mobile tech moves fast, and that means that phones have probably changed a little since the last time that you went phone shopping. And all those new high end models can be tempting, but price tags over five hundred pounds are pretty off putting. Today we're talking about the best mobile choices for average users, the people who want a decent phone, but don't want to spend a fortune. So, if you're trying to decide on a new mobile, keep reading to get a little help...

An Average Phone is a Good Deal...

We know that those iPhone 5s and Samsung Galaxy S4s are tempting. They're beautiful phones. But the thing is that they're so loaded down with features that the average user just isn't going to need what he's paying for. Are you really going to fill up 32 GB of memory? Or 64 GB? A powerful octo-core processor sounds great, but chances are that you're not going to take advantage of all that power at your fingertips. Buying high end phones just ends up being a waste of money if you're not going to be using all of their features. A far better deal is going to be to find an average phone that has good specs and save yourself a couple of hundred pounds. So what should you be looking for?

Screens are pretty important on a touch screen phone, obviously. One thing that you're not going to need to worry too much about is resolution or PPI. All newer phone models have great, clear screens, and those resolution and PPI specs are incredibly similar for most devices. But take a good look at size. You want a screen that's between four and four and a half inches, the bigger the better. You want a good viewing experience, of course, and you want to be able to read web pages without scrolling around too much. But more importantly, you want to be able to type easily. The bigger your screen is, the bigger your on screen keyboard will be, and the easier it will be to type. Other than that, try to skip the older LCD screen tech, but anything from TFT-LCD on up is going to be fine.

Processors are getting faster and faster, but the problem is that unless you're using power intensive programmes, such as photo editing software, the average user is just not going to see any speed difference above around 1.2 GHz. So the average phone should have a processor that runs at about 1.2 GHz, and is preferably dual core or quad core. You might want a little more power than this if you're into high end gaming, or you're a big multi-tasker, but really 1.2 GHz is going to do the job.

When it comes to RAM you want around 1 GB, that's going to keep your phone nice and responsive and stop it from lagging or freezing. Internal memory is a different question. From around 8 GB to 16 GB should be fine, but it really depends on how much data you want to keep on your phone. Usually, you're better off getting a device with a Micro SD card slot to expand the memory if necessary, rather than spending more on bigger internal memory. Or even consider storing data on the cloud with something like a Drop Box account, as many people these days are doing. You can then simply access your data over your phone's 3G or WiFi connection when you need it rather than keeping it all on your phone.

The Average Everything Else

You'll want a camera, so look for anything from 5 MP up on a rear facing cam, front facing cameras are lower resolution, so around 1 MP is fine. 3G is obviously going to be standard, occasionally you can find 4G capabilities in phones of this price range, but not incredibly often yet. And speaking of price, how much should you be paying? A decent, mid-level phone that's going to meet your average specs is going to be anywhere from about two hundred and fifty to three hundred and fifty pounds.

Yes, the Samsung Galaxy S2 is an older model, but it's still a brilliant little phone. It meets all your specs and more. 4.3 inch screen, 1 GB RAM, 16 GB internal memory and 1.2 GHz processor. It's perfect. You also get the higher resolution 8 MP camera, which is a nice touch, and the screen is Super AMOLED +, so there's no worries about the quality of your display. One thing about the Samsung Galaxy S2 is that it does retail with the older Android 2.3 Gingerbread operating system, but you'll download an update to Android 4.1 Jelly Bean as soon as you switch it on. And the best part? You can get your hands on the Galaxy S2 for around two hundred and fifty pounds, so it's at the low end of the budget...

If you've got a little more to spend, then you might want to think about the LG Nexus 4. This retails at around three hundred and fifty pounds, but you obviously get a little more for your money. In fact, this is getting close to being a top end phone, but it's such a great bargain. You get a 4.1 inch screen, a 1.5 GHz processor, 2 GB of RAM, and 8 GB of internal memory. Plus, you still get the 8 MP camera. It comes running Android 4.1 Jelly Bean out of the box. It really is a great phone, and worth taking a look at even though it's at the higher end of the budget. 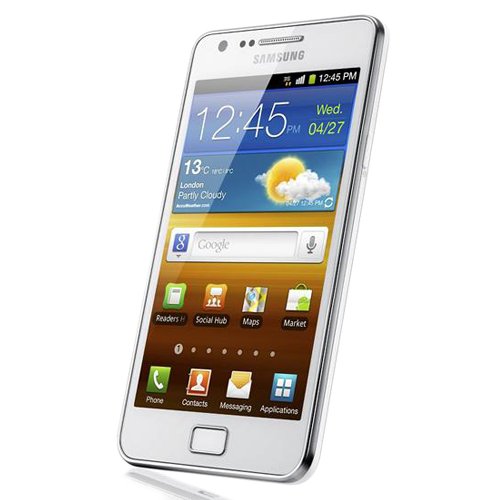