The Blue-Cheeked Amazon is endemic to north-east South America. It is thought to be present in northern Brazil as well as in south-east Venezuela and French Guiana. Although it is sometimes seen in coastal regions, its natural environment is the humid rainforest, cloud forest and savannah woodlands. It mostly frequents lower subtropical zones up to altitudes of 1,700 feet and is believed to move about seasonally following the availability of food. It lives high in the canopy, higher than other parrot species.

Parrots belonging to the genus Amazona are of medium size and native to the New World. Most are predominantly green. Many have become very popular as pets because their remarkable ability to mimic. The Blue-cheeked Amazon, Yellow-headed Amazon, Yellow-naped Amazon and Orange-winged Amazon are some of the commonly kept varieties. The macaws and the African Grey are others that are coveted for their vocal abilities and playfulness.

There is a lack of reliable information about the blue-cheeked Amazon's breeding and feeding habits. It is most often seen in pairs or small flocks, gathering into larger flocks before settling to roost at night. Its diet most likely consists of plant material including seeds, fruits and nuts.

The blue-cheeked Amazon is also called Dufresne's Amazon in honour of the French zoologist, ornithologist and taxidermist who lived from 1752 to 1832. Dufresne had a private collection of some 1,600 bird specimens, 12,000 insects as well as eggs, shells and fossils. All specimens were labelled with both French and Latin names. He was awarded the Legion of Honour in 1829 and died of lung disease in 1832. His collection is now kept in the Royal Scottish Museum after being purchased by the University of Edinburgh.

The blue-cheeked Amazon has a length (including the tail) of 34 to 36cm. It varies in weight from 480 to 600 grams and is mostly green. The sexes are similar. The eye is an orange-red and the eye ring is grey as is the beak. The base of the upper mandible is a pinkish-red. The bright blue cheeks fade to violet-blue near the ears. The forehead and lores are an orange-yellow. The neck plumage is a dusky black. There are wide yellow tips on the yellow-green side feathers of the tail. The four outer feathers have faint orange markings. 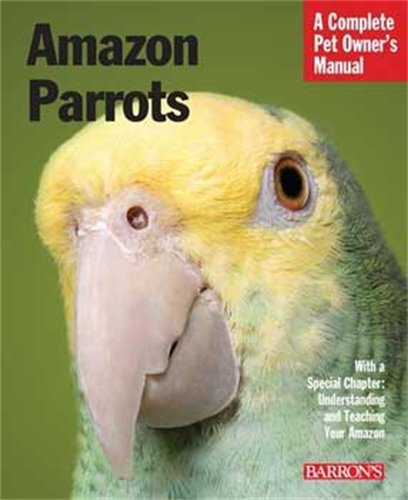 This species has the scientific name of Amazona dufresniana. The bird is listed as 'near threatened' on the International Union for Conservation of Nature (IUCN) Red List. Because of its restricted range and the low density of its population, deforestation is of major concern. The bird is also trapped for the pet trade and for food.

Amazons are loving companions and can live for fifty years or more in captivity. They need much more attention and care than some pets as they are quite intelligent and need constant stimulation and activity. Safe but destructible toys will satisfy their need to chew. They need free time out of a cage if the cage is small. Bored parrots can develop self-destructive behaviours such as feather-picking.