Indian Summer is an InfoBarrel author with an interest in personal finance and travel.  If you are interested in writing online in a great community InfoBarrel is the place for you.  You can find out more about this community by following this link.
InfoBarrel is a writing platform for non-fiction, reference-based, informative content. Opinions expressed by InfoBarrel writers are their own.
InfoBarrel > Lifestyle > Fashion

You’ve seen them in movies and on probably on your high school history teacher.  You may have even worn one at a wedding or other black tie affair, but should you consider a bow tie as a fashion accessory for everyday wear?

Origins of the Bow Tie

The necktie first came into fashion during the 18’Th century in renaissance France.  They were brought to the country by Croatian mercenaries who wore scarves around their necks in order to keep their uniform shirts closed at the top.  The French, leaders of fashion in their day, began to adopt the neck scarf and over the years modified it into what we now recognize as the necktie.  No one is quite certain which tie, the bow or neck,  was the first to evolve from the Croat’s scarf, however the bow tie eventually rose to the height of fashion as the 18’Th and 19’th centuries progressed.

Even in its heyday during the 1800’s the bow tie gave the wearer certain connotations.  Men with bourgeoisie professions such as doctors, lawyers, school teachers, and politicians were commonly seen wearing the accessory.   Because of this connection with the upper middle class, the bow tie eventually came to represent pretension and snobbishness into the early 1900’s.  Afterwards it began to be worn by intellectuals, especially college and university professors.  This led to the accessory having connotations with the wearers being viewed as nerds, bookworms, and geeks.

The accessory was still viewed as having a touch of class, however.  It was and still is required at any formal “black-tie” affair.  Movie heroes such as Fred Astaire and James Bond continued to give bow ties just a hint of cool and they have always been required wear for politicians.  However they were still considered socially awkward to wear in most circumstances.

Recently, however, bow ties have begun to make a comeback.  The “hipster” movement has been partially responsible for this resurrection of the accessory.  Pop culture icons such as Steve Jobs and even fashion designers such as Karl Lagerfield have started to be seen sporting the accessory while out of normal “black-tie” apparel.

So is the Bow Tie Right for You?

If you are attending a formal event such as a wedding, funeral, or business meeting, a bow tie will almost always be acceptable attire.  If you choose to wear one outside of these types of events you must consider the kind of impression you are going to make.  A hipster might wear a bow tie to proclaim that their individualism and that they are not subject to modern fashion norms whereas a teacher or professor might wish to lend an air of intellectualism to their persona.

If you do choose to wear this accessory, remember that they must always be paired with a collared shirt or sweater.  Never wear your tie with a t-shirt, sweatshirt, or any other shirt that doesn’t have a collar.  Also, unless you want to look like you just stepped from the movie “Revenge of the Nerds” you will want to avoid clip on ties and pre-tied bow ties.  Learning how to tie a bow tie is not difficult and a good set of instructions can be found by following this link: How to Tie a Bow Tie.

When choosing a tie, remember to consider whether or not your tie matches the rest of your outfit in both color and fabric.  A checkered tie might go well with a corduroy suite in an intellectual setting, but it won’t jive to well with a monotone silk shirt you plan on wearing to a night club.    Before you step out in your bow tie, remember to take a look at yourself in a mirror.  If you’re satisfied with your appearance you should be good to go.  Confidence can make any form of apparel work for anybody.  Remember that it’s the man makes the clothes, not the other way around. 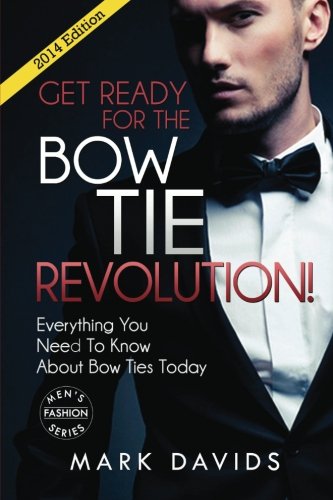 Get Ready For The Bow Tie Revolution! Everything You Need To Know About Bow Ties Amazon Price: $10.99 $9.07 Buy Now(price as of Jun 13, 2015)
If you're interested in learning more about this accessory then this book is for you. In it you'll find tips on everything from how to buy the right tie for the occasion and how to match them with other accessories such as suspenders and pocket squares.
Next >> Creative Organization: 4 Jewelry Display Solutions