The Bush Doctrine: Beneficial For The United States?

The ideas which formed the Bush Doctrine go back to around sixty years ago. When World War II was concluded, Winston Churchill became outspoken about the failures of preventing the global conflict which claimed millions of innocent lives. Churchill spoke in detail about Britain’s failures and how they let three nations- Germany, Italy, and Japan- become behemoth fascist military states. Churchill realized that modified alliance systems became quickly ineffective against immensely powerful militaries which all possessed deadly weaponry.

Churchill viewed World War II as a conflict not just about containing Nazi Germany in order to keep them in check, but eventually realized that Britain would eventually become prey that Germany would feed on. British foreign policy clearly failed to initiate a preemptive strategy to ensure that no nation would ever challenge its military capabilities. Furthermore, they would never have the ability to inflict colossal amounts of damage directly on its civilians and cities.

Following the events of September 11th 2001, the Bush administration followed the same concept that Churchill outlined, which drastically changed American foreign policy. Not just did the Bush administration highlight new strategies in fighting terrorism at home and abroad, but it later focused on an array of other intricate issues.

First and foremost, in 2002 the Bush Doctrine initiated a new strategy to further contain the Russian Federation. Originally in 1972, the U.S. and Soviet Union signed the ABMT (Anti-Ballistic Missile Treaty). Once signed, the treaty limited both nations to constructing only two ABM complexes, each of which were to be limited to 100 anti-ballistic missiles. These ABM complexes would be initiated only if a nuclear strike occurred.

The ABMT lasted about 30 years. However, it did last after the Soviet Union collapsed. The ABMT expanded in 1997 after the U.S. and four former Soviet states agreed to join the treaty. Many military experts believe that one of the strategies behind the Bush Doctrine was to eliminate this treaty completely. This would cripple Russia’s defense capabilities by being outpaced by American ABM systems. The U.S. officially withdrew from the treaty in 2002, leading to the complete termination of the ABMT. Many military analysts believe that this strategy initiated by the Bush administration, created the foundation for an advanced Polish-based missile defense system purposely designed to enhance European security. On the other hand, many defense experts concluded that this strategy was only formulated to frustrate Russian leaders, ultimately limiting and militating the expansion of Russian missile programs.

Second, the Bush administration decided to abjure from the Kyoto Protocol. Although the U.S. was criticized for this decision, Pres. Bush believed that these regulations would damage the overall U.S. economy. The Kyoto Protocol forces nations to reduce greenhouse gases emissions. In the end, this is supposed to reduce the amount of Carbon dioxide emissions from entering the atmosphere which can reduce the long-term risk of global warming. Many environmentalists later criticized this decision because it damaged the U.S.'s reputation as a nation which was supposed to lead in the so called "green revolution".

Lastly, the Bush Doctrine's final objective clearly stated that the U.S. would aggrandize its presence in the world and eliminate any nation state that poses any threat to the U.S. directly. Moreover, American military involvement and other forms of hegemony would create democracy in the Middle East and other parts of the world.

The Bush administration's goals were to enervate any potential adversaries (including nations harboring terrorists) who may have posed a threat to American national security. The implementation of preemptive warfare would theoretically assure American security across any region of the world. On September 20, 2002 many of these policies were mentioned in the National Security Strategy of the United States. These policies ultimately lead to a war in both Afghanistan and Iraq.

Critics of the Bush Doctrine believe these policies insist that a unilateral approach to solving these issues will only create more problems in the future. They also believe that these policies will never create a stable and democratic Middle East, chiefly due to large numbers of U.S. troops fighting monolithic numbers of inimical forces and creating a false impression to the world that the U.S. does not need help from anybody else.

Other opponents conclude that the U.S. could not continue to further antagonize nations such as Russia, Iran, and China. Some of these critics believe that a "coalition of the willing" could not offer enough logistical and overall military support in the case of a "serious military confrontation".

There is no doubt that the Bush Doctrine advocates American exceptionalism. One must view the atrocities (terrorism included) that occurred in the past and understand what caused these catastrophic predicaments. Many military experts and diplomats would argue that Churchill was correct and Britain should have preempted in 1938 or earlier. The same analogy could be used during the Yom Kippur war of 1973, when Israel preempted against its adversaries. The Bush administration applied several strategies to create an equilibrium in the world. Ultimately, they attempted to maintain peace, democracy, and security in certain regions of the world, especially when many other nations just watch atrocious acts unfold.

One should conclude that this administration's policies may have been controversial, and at the same time highly criticized in the media, but ultimately American democracy is clearly a better form of government than most other government structures in the world. Moreover, many experts strongly believe that there still is hope that democracy can succeed in parts of the globe. In the end, marginalizing and denouncing the ideology of terrorist-related groups will create a safer world we live in. 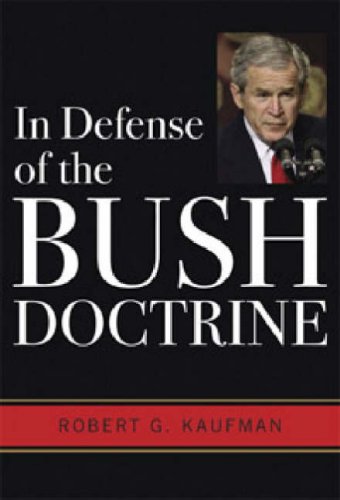