If you enjoyed this article then check out my other articles on haunted tourist locations: http://www.infobarrel.com/The_Jennie_Wade_House
InfoBarrel is a writing platform for non-fiction, reference-based, informative content. Opinions expressed by InfoBarrel writers are their own.
InfoBarrel > History

The so-called lost colony, was founded on the shores of what is now Dare County, North Carolina.  The colony was established with materials and colonists supplied by Sir Walter Raleigh under direct authorization from Queen Elizabeth.  However, the colony was not to be. After establishing the colony the Governor, Governor White, returned to England.  This was so he could continue gathering supplies, fresh food, grain, and new colonists for the fledging colony.

Now, there were amble supplies in Roanoke for the colonists to live on for several months.  Plus, they had the added benefit of being near open water where they could fish for food.  Also, the natives the Croatan Tribe were waffling between being enemies and friendly.  This was a change because in the previous year with another group of settlers the Croatan Tribe were out right hostile.  One of the reasons for the Governor White's departure was that just weeks before a colonist had been killed while fishing and it was rumored that the Croatan Tribe was responsible.

Governor White returned to england and found out that the Kingdom was gripped by rumors of war.  The Spanish had amassed an armada and was planning on sailing to England so they could overthrow Queen Elizabeth.  Naturally all ships were seized so they could be use for the defense of the England.  The small colony in Virginia named Roanoke mattered little against a massive fleet that could wipe out England itself.  So for nearly two years Governor White was forced to remain in England until he could get permission to return to Roanoke.  When he returned he found the colony deserted with only one word written on a tree, Croatan.

The colonists were never found and the word croatan has mixed meanings.  We will examine the established historical reasons for the colony's failure and then look at the dare stones and what they might mean.

There are many "established explanations" for what happened during Governor White's absense.  We will look at these reasons in the space below.

Integration with other Tribes:  It has been theorized by modern historians such as Lee Miller that the Roanoke colonists fled Roanoke because of a war with the Croatan Tibe.  This would explain the single mysterious word scrawled in the bark of a tree in the Roanoke settlement.

However, if that is the case then why were there historical records left behind by them at this other tribal site?  Why did they not make an effort to journey to Jamestown in 1607 when that colony was established?  The Zuniga Map, pictured above, alludes to a spot where the colonists fled.  Miller theorizes that the reason why the colonists never made contact with the other colony was because they integrated with the new tribe and their children were raised by  these people.

The Return Voyage:  Another theory is that the Roanoke colonists were tired of waiting for Governor White to return to Roanoke so they made a boat.  The area were they were living is forested and it is possible that they were able to construct a ship, but there was no way it would make the trip back to England.  There were no shipwrights in the colony.  So, how could they sail back?

The Spanish Destroyed Roanoke:  Another more possible theory is that the colony was destroyed by the Spanish.  The Spanish were at war with England during this time period and they had an established colony in Flordia known as Fort Augustine.  It is possible that they sailed up the coast and found the colony once they did they destroyed it.  If this is the case then were their no bodies or evidence of a battle when Governor White found it?

Other Theories?  There are other theories and even evidence that had been dismissed by modern historians as forgeries.  However, let's take a look at that evidence and see what it has to say about the Roanoke colonists.  This evidence is collectively known as the dare stones.

The Dare Stones are a series of stones that were found across the south during the late 20's and early 30's that seem to tell the story of the lost colony and what happened to them after Governor White's departure.  The stones were written by Eleanor Dare who gave birth to Virginia Dare.  Virginia was the first English child born in the New World.

Eleanor left a trail of 46 stones across the south beginning near Roanoke and continuing down through the south to what is now the suburbs of Atlanta.  These stones tell the story of the survivors and their exodus to what is now Georgia.  These stones seemed to almost serialize the story of the lost colony and most of them were found in the darkest times during the Great Depression.

This fact has led some modern historians to claim that the stones were forgeries perpetrated by hoaxers.  However, is it that hard to believe that if Eleanor Dare had survived that she or some other member of the colonists wouldn't have left clues?

All the other explanations put forward by modern historians have their weaknesses and that is not to say the stones have no weaknesses.  It is perfectly reasonable to conclude that they were found by hoaxers, but what if they weren't?  If we assume that they are real then we have the first real evidence of the Roanoke settlers.  All the other explanations show that there is no evidence to support the claims.  There is no evidence that they were destroyed by the Spanish.  The survivors that integrated to other tribes left no historical records, but the dare stones do show that the survivors lived and wrote down their story.

It would make sense for the stones to be real simply because it is the only evidence that exists that there were survivors and that they wrote down a story about their exodus.

The Dare Stones are evidence that supports an exodus from the lost colony to parts unknown in the deep south.  In my opinion these stones can be supported simply because they are written evidence on rocks.  These rocks were tested on the show America Unearthed and it was found that the etchings in the rocks were legitmate.  Check out the video above for yourself.  Either way the stones show a story and are evidence of the lost colonists.  If they are fake then the hoaxers orchastrated a great hoax over the American public during the Depression, but if they are real then they are actual evidence of the lost colony and that is exciting. 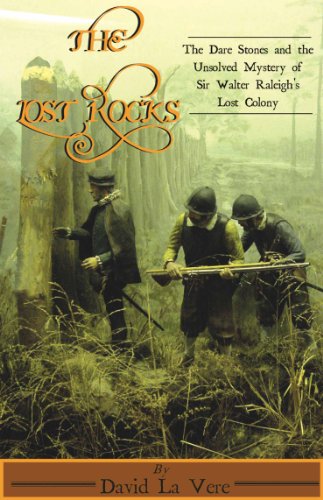 The Lost Rocks: The Dare Stones and the Unsolved Mystery of Sir Walter Raleigh's Lost Colony Amazon Price: $57.48 Buy Now(price as of Jun 1, 2016)
Find out about the Dare Stones today.
Next >> 10 of the Most Bizarre and Horrific Torture Techniques From History