The Dorking chicken is rare and endangered. The Dorking is listed as 'at risk' by the Rare Breeds Survival Trust of Britain. In Australia, the Rare Breeds Trust recognises the breed's genetic value as well as its inherent usefulness and attractiveness.

The Dorking is the only chicken breed endemic to Britain.It was developed in the town of Dorking, a market city some 21 miles south of London in the county of Surrey. In 2007, the town erected a ten-foot statue of a Dorking chicken in the middle of the A24/A25 roundabout in the town.

The Dorking has five toes instead of the more usual four and its other claim to fame is that it has red ear lobes but lays a white-shelled egg. With their white skin, they are less popular in the United States than in Europe.

It is thought that the Dorking originated in Italy. Columella, a Roman writer during the reign of Julius Caesar, talks of large hens with broad breasts, small, upright combs, large heads and square frames. He also mentions the five toes. When the Romans went to Britain around AD30 they took the chickens with them. The British over the years developed the Dorking to become a prized meat bird.

Dorkings can have rose combs or single combs. Traditionally rose combs appear in the north and single combs in the south. The first poultry show to be graced by the Dorking was in 1845. The Dorking has had a hand in the development of several other breeds including the Light Sussex and Faverolle.

The Dorking is regarded as a dual purpose bird. It averages around 140 eggs a year and is heavily fleshed with tender white meat.

It has a rectangular body with very short legs (and have we mentioned it has five toes?). The combs can be rather large and prone to being frostbitten if the bird in unable to find adequate protection during cold weather. It has white skin. Coloured adult roosters weigh up to 9 pounds and hens 7 pounds. The white Dorkings are slightly smaller with cocks weighing 7.5 pounds and hens 6 pounds.

It is a friendly and easily tamed breed. It is docile and needs to be watched if it is kept with more aggressive breeds as it may be kept away from feed supplies. Although so large they are quite good flyers. To become big, meaty birds thye need to be fed well as they will become weedy and stunted if deprived of food and space to grow. They may be two years old before they are mature. 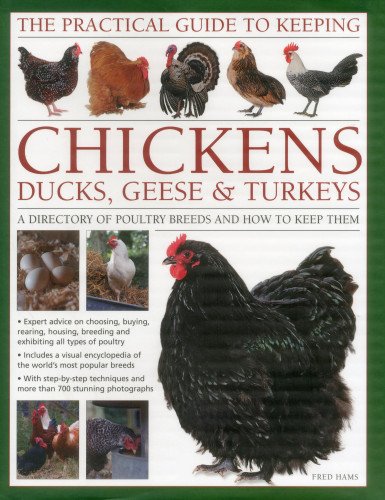 The Practical Guide to Keeping Chickens, Duck, Geese & Turkeys: A directory of poultry breeds and how to keep them: with step-by-step instructions and more than 650 colour photographs Amazon Price: $35.00 $19.36 Buy Now(price as of Sep 2, 2016)
This comprehensive and practical guide shows you what to look for in healthy poultry. Feeding, hygiene, treating ailments, and good husbandry are all covered.

The most common colour is the silver-grey. These very handsome cocks have pure white hackles and saddle. The underparts are black. The hens have slate-grey backs, pencilled with darker markings. They have a salmon breast and silver hackles striped with black.

Red, white, cuckoo and dark varieties are also available. The red is very dark and the white a pure white. Cuckoo Dorkings have fuzzy stripes of grey and dark grey across each feather. The Dark Dorking is similar to the Silver-grey variety but is darker and has a black crescent on the back and breast. In all colourations, the eyes, ear lobes, wattles and combs are red. The feet and legs are white. There is also a bantam version which is just as attractive as its older counterpart.

The breed is famous for the fine quality of its meat. Excellent first cross meat strains can be bred by crossing the Dorking with the Cornish (Indian Game). This gives an early maturing table chicken. It has a large breast and full flavoured carcass but is lightly boned. The large eggs are white to cream in colour. It lays well early in its life but is always happy to go broody at the least excuse. It prefers a free range environment and will cover a lot of ground if allowed to roam. Occasionally the fifth toe contributes to foot problems, many of which can be avoided by supplying large, low perches.