Located around 12 kilometers from the Egyptian capital of Cairo along the River Nile, the Giza Plateau extends on the edge of the Western Desert. The flat, regular shape of the plateau made it an ideal site for the construction of monuments, while its position to the west of the Nile, that is to say, towards the setting sun, was a religious prerequisite for necropolises (large ancient cemetries characterised with elaborate tombs and monuments). The vicinity of the river also allowed for easier transportation of materials.

A bed of nummulite fossils (a type of protozoa common in the warm seas following the Jurassic Period, around 100 million years ago) dating from the late Cretaceous, early Tertiary period has been discovered to the northwest of the plateau. The slope extends towards the southeast with alternate strips of hard and soft rock: in this area the Ancient Egyptions removed the softer limestone to reach the harder sections which they cut up into blocks to use for the construction of pyramids, tombs and temples.

Towards the south rises an irregular hilly feature characterised by many chasms, wadis (dry river beds) and gorges from which the stones and clay needed for building were extracted. These were materials of good quality, easily extracted and close to the building sites. The white limestone used for the outer covering of the pyramids came from Tura, on the east bank of the Nile, whilst the granite arrived by river from Aswan.

Already considered to be a sacred site before the construction of the great pyramids, this area is called Kheret-Neter-Akhet-Khufu meaning Necropolis of the horizon of Khufu. It was also known as Rostaw , from the legend whereby Osiris was the god of the dead and 'Lord of Rostaw' - as in the sovereign of the caverns and the passages thought to lie beneath the Giza plateau. The plateau is of course dominated by the three great pyramids and the Sphinx.

The Pyramid Of Khufu

Built during the reign of Khufu between 2551 BC and 2528 BC, the Great Pyramid was almost certainly conceived as a fuerary monument for the pharaoh's burial; little is known about Khufu's era and many hypotheses regarding the monument should be treated with caution. Herodotus recounts that the pyramid was built over the course of 20 years, with 100,000 men working three-monthly shifts; statistics which might not be far from reality. The pyramid form had a religious-symbolic significance associated with the representation in stone of solar rays or the primordial hill at the origins of the world.

Considered by the ancients to be one of the Seven Wonders of the World, the building still arouses admiration and awe, due both to its sheer bulk and the surprising precision of its dimensions given the instruments available 4,500 years ago. The sides of the base measure 230.40 x 230.51 x 230.60 x 230.54 meters, the total difference of just 20 cm translating to a margin of error of one in a thousand. At 146.59 cm in height, the Great Pyramid was the world's tallest building until the construction of the Eiffel Tower in 1889. The volume of around 2.7 million cubic meters is composed of around 2.5 million blocks of stone weighing on average 2,500 kilos each. The precision of the geographical alignment of the entrance face is equally surprising. The deviation from due north is just 0 degress 3' 6".

The present day stepped appearance is due to the removal, during the period of Arab domination, of the external covering in white Tura limestone which would have made the pyramid glow brightly in the sun. Today the summit is truncated, creating a platform, but in the past it would have stopped at its peak with a possibly gilded capstone to the structure. The entrance is situated on the north face at a height of about 15 meters. The current access, a passage created by ancient tomb robbers is lower. A descending corridor leads to a subterranean chamber, while a rising passage instead leads to the Grand Gallery and the Queen's Chamber. The latter was not actually a female royal tomb, but was named as such by the Arab visitors due to its unusual double pitched ceiling.

The King's Chamber, the object of controversy and unresolved mystery, features walls dressed with monolithic blocks of granite, the same material also being used for the 9 ceiling slabs. All the granite elements are perfectly cut and fit together with absolute precision. The monolithic sarcophagus, made of the same type of pink granite, lacks inscriptions and the cover is missing.

Outside the building, alongside the east face, are three satellite pyramids attributed to the Queens Hetepheres, Meritetes and Henutsen; on the south side of the pyramid, the Museum of the Solar Boat contains a perfectly restored and reassembled funerary boat over 40 meters long that would once have sailed on the Nile, whch was discovered in 1954 in a trench at the foot of the Pyramid of Khufu.

The Pyramid of Khafre

While smaller than the Great Pyramid, the Pyramid of Khafre measures 215 x 215 meters and stands 143.5 meters tall and is nonetheless impressive as it is situated slightly higher than the other and its external covering has survived at the top, below the tip.

The entrance is located on the north side and was discovered  by Giovanni Belzoni in 1818; at the end of a long corridor is a single funerary chamber, excavated in the rock and featuring a ceiling of limestone slabs. A black granite sarcophagus with no inscriptions stands at the chamber.

This is the smallest of the three, at just 102.2 x 104.6 x 65m tall, but must have been extremely beautiful as it was once coated with pink granite. The entrance is located at the base of the north side and leads, by way of a corridor, to an unfinished mortuary chamber excavated in the rock at a depth of around 6 meters. A second passage leads to the burial chamber. Here a basalt sarcophagus was discovered, lackling inscriptions but decorated with architectural motifs.

Unfortunately the relic was lost in a shipwreck while being transported to Europe.

The Sphinx is located around 500 meters east of the Pyramid of Khafre, along the monumental road which linked the funerary temple with the lower temple of the pharoah. The monument was sculpted in the living limestone of the plateau, utilising a protuberance in the terrain that was probably created by quarrying work. The human head is wearing a Nemes headcloth with an asp and the false beard of the pharaohs (relics which were found in the sand), while the body is that of a crouching lion, a symbol of regal power. The face of the pharaoh is thought to be that of Khafre himself.

Between the front paws stands the stela of Thutmosis IV, commemorating a premonitory dream of the pharaoh according to which he would have acceded to power had he brought to light the sphinx which had on a number of occasions been buried by the sand. That scrupulous observer Herodotus, perhaps did not mention the Sphinx because he could not actually see it. The ruins of the temple on which the sphinx rises (the Temple of the Sphinx) flank the Lower Temple of Khafre, the architecture of which features incredibly precise masonry with large granite blocks being used for columns, architraves andf internal coverings. 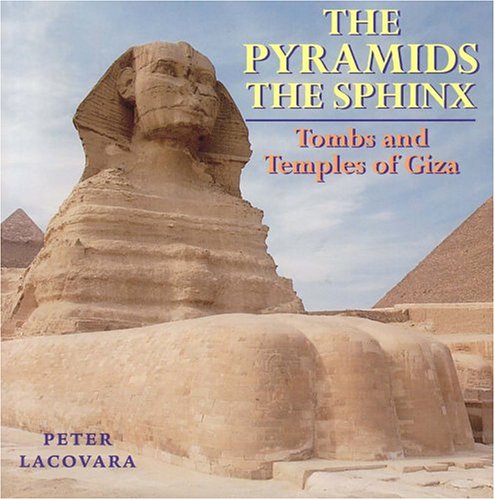