Only the ostrich and the cassowary are taller than Australia's emu. The emu has changed little in 80 million years and is now found only on the mainland. It belongs to a group of flightless birds known as ratites. Ratites lack a keel on the sternum. Thus there is nowhere for the attachment of wing muscles. Other ratites include the kiwi, rhea and the cassowary.

The emu is found in a variety of habitats from coastal sand plains to alpine snowfields. They are not found in rainforests or in very arid regions.

Description The emu ranges from 1.6 to 1.9m tall. The formation of the feathers is unique with two complete feathers coming off each shaft or quill. All feathers are virtually the same, being shaggy and generally a grey-brown. The colour varies a little according to the region. Black tips to the feathers absorb heat but the emu's walking speed of 1-2 metres per second creates sufficient breeze to remove absorbed heat. Fine, black feathers cover the head and neck but are so fine that the head and neck appear naked. The beak is strong, broad and flat. The wing vestiges are hidden under the feathers. Each foot has three forward-facing strong toes. 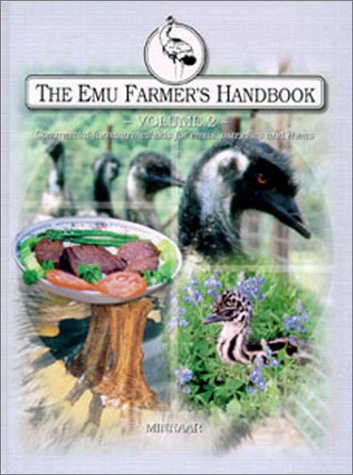 The Emu Farmer's Handbook: Volumue 2: Commercial Farming Methods for Emus, Ostriches and Rheas Amazon Price: $157.75 Buy Now(price as of Jul 17, 2015)
All aspects of raising emus as a commercial venture are covered in this informative manual.

Emus can forage and walk all day, seemingly without feeling the heat. However, they must drink every day. Emus have large, highly folded nasal passages called nasal turbinates. Cool air passes over the turbinates as the bird inspires. This is warmed by heat transferring from the turbinates which then become colder. As the warm air is expired through the now-cold nasal passages it condenses into water droplets which are reabsorbed. Emus also pant. The resulting evaporation also cools the birds.

Emus have been clocked at 70km/h for short distances. They can stride up to 2.7 metres and are strong swimmers able to swim for long periods of time. They will actively seek areas of water on a hot day. Their defence, apart from their speed, includes the ability to kick powerfully in any direction. They can easily break bones and tear muscle with a well-aimed kick and it is common knowledge that they can disembowel a predator if the opportunity arises.

The female is typically larger. They have a range of noises from grunting to 'booming' or 'drumming'. Only the female 'booms' through an inflatable neck sac. Booming can be heard up to 2 kilometres away.

Emus are not fussy about what they eat – fruit, seed, insects, car keys, animal droppings and camera parts. They feed on crops and knock down as much as they eat. They also destroy fencing and are seen by pastoralists and graziers as pests.

Emus have a high sensitivity to climatic conditions. They will walk miles to areas where recent rains have seen a sudden surge of grass. Once the days shorten, the emus begin to court the opposite sex. The females do a lot of drumming; there is much feather-fluffing, grunting and bobbing. The males may fight each other. To mate, the female sits on the ground. The pair stays together for five months. They may walk great distances protecting their territory. A platform of grass is built some 10cm thick and 1 to 2 metres in diameter.

A pair will mate every day or so with eggs being laid every 2 to 3 days. Once 8 to 10 eggs are laid (though sometimes as many as 20), the male goes broody and sits on the eggs. The eggs weigh around 500 grams and are a dark bluish-green when fresh. The shell consists of layers which become progressively lighter towards the centre. This contrast in colour makes the eggs very attractive when carved. Once the male goes broody, the female will continue to lay eggs in the nest although these may have been fertilised by other males. Eventually she leaves and may lay another clutch with a different male. Up to three clutches a season may be laid if conditions are good. 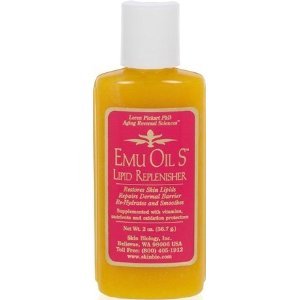 After 7 to 8 weeks, the eggs hatch. During this time, the male has lived off his body fat and taken in water from dew. He is a very attentive father, turning the eggs up to a dozen times a day and gently drawing back any that roll out of the nest. By the time the eggs hatch, he will have lost some 4.5 to 9 kgs. New born chicks have dark brown stripes on a cream or grey background. They are well-camouflaged. The male is aggressively protective of his brood and will even adopt any strange chicks if they are a similar size to his own. Chicks put on a kilo a week in their first few weeks. The downy striping is replaced by dull brown feathers. They are fully grown at a year old and may breed at 20 months. Predators include dingoes, feral cats and eagles but the eggs are generally more in danger from predators than the chicks.

Nowadays, emus are farmed commercially for their oil, skins and meat. The oil is used for a variety of skin care products and in unguents for the treatment of muscle conditions. Emu leather is fine and soft and, while the meat is not on every restaurant menu, it is slowly gaining favour.

The emu and kangaroo both appear on Australia's coat of arms. Interestingly neither animal is capable of any real movement backwards.