What Is Kombucha & What Are Its Health Benefits?

Kombucha is a raw, fermented tea drink that contains sugar, bacteria, and yeast. It is sometimes reffered to as “mushroom” or “mother.”

Although the exact origins of kombucha aren’t totally clear, some believe that it came from the ancient Chinese, dating back to about 2000 years ago. There is evidence that Geghis Khan and his men drank this bubbly drink for vitality. It eventually traveled to Russia, where there are records documenting the culturing of tea. Kombucha did not reach Americans until the 1970s, when people began to become more health conscious and also took up the hobby of home brewing.

Many people opt to drink kombucha for more reasons than just pure enjoyment. Because the fermentation results in a combination of amino acids, B vitamins, and various chemical compounds, there are associated health benefits of drinking kombucha:

Because kombucha is naturally carbonated, it contains bubbles similar to soda or champagne. This consistency gives a nice effervescent taste to the tea. Although kombucha is sweet, it does have a bite (which is slightly bitter) due to the acids (acetic, lactic, and malic, among others) in the mixture.

While kombucha generally has an alcohol content of under 0.5%, regulators and retailers began expressing concern in 2010 that the tea may need regulation. This was due to some bottles containing more than 0.5%, the legal limit for a beverage to be considered alcoholic.

While purchasing pasteurized kombucha at the store isn’t regulated, it’s the raw kombucha (which contains the minute amount of alcohol) that now has restrictions. Large market share holder GT even redid one of their formulas so that they could keep it on the shelves. Many retailers keep their raw inventory in the alcohol section of the store, and some even require a 21+ ID to buy it. Having an open bottle of raw kombucha while driving can even get you an open container ticket by law enforcement.

Brewing kombucha at home has grown in popularity. This is typically done by placing a culture in a sweetened black, green, or white tea. The sugar is necessary for fermentation. Herbal teas are not recommended for making kombucha, as it can negatively affect the culture.

Great care must be taken when kombucha is home-brewed. If contamination occurs, the consumption of that batch can result in illness. As a safety measure, the container of kombucha is often covered with a close-weaved cloth to prevent contamination. The goal is to allow gas from the kombucha to “breathe,” while keeping out any mold, dust, or bacteria. Temperature, taste, size of vessel, and desired acids are all factors in how long the kombucha should ferment.

The source of kombucha should always be considered before drinking it. Because the tea is sometimes brewed in unsertile homes, contamination can occur. If lead pots are used to brew the mixture, lead poisoning is a concern as well. 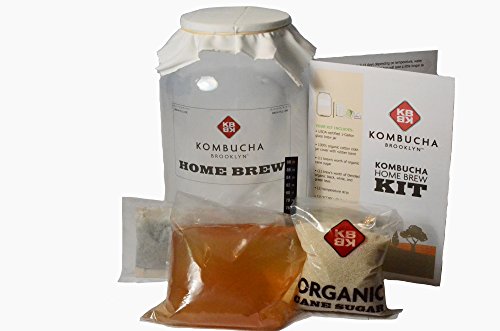