Ready to start listening to books?  The 5 Best Business Books on Audible is a great follow up.
InfoBarrel is a writing platform for non-fiction, reference-based, informative content. Opinions expressed by InfoBarrel writers are their own.
InfoBarrel > Business & Money > Jobs & Careers > Self Employment

The Future of Work (As We Approach the Technological Singularity)

During the paleolithic era, which covers the vast majority of human existence, mankind did little other than seek food and shelter, and try to stay alive.  In fact, this was all-consuming to the point of taking up literally every waking hour on many days, and the average "work day" (meaning work that really had to be done every day in order to survive) approached 16 hours, leaving very little leisure time.

As the agricultural revolution took hold (a mere 10,000 or so years ago), our way of life started to change dramatically.  We didn't have to chase our food around because we grew it from the ground or raised and slaughtered it ourselves, leaving several hours per day for leisure for many people.  This way of life carried on for another 100 centuries or so, until the industrial revolution came along and changed everything.

Nowadays, it's hard to find motivation to work more than 8 or 9 hours a day, but back during the paleolithic era, human beings frequenlty worked an average of 16 hours per day just to survive.  If they didn't chase after their potential food, they might starve to death.  If they didn't run from predators, they'd die.  Food was never a certainty, and neither was security.

Henry Ford was an early proponent of not only the $5 work day (which was considered an actual "living wage" at a tme when virtually nobody paid their workers any more than they thought they could get away with), but also the 40 hour work week, an immense drop from what had existed ever since the dawn of the agricultural revolution.

In 1926, Henry Ford announced that workers would get a 40 hour work week.  This amounted to 8 hours per day on average, which was a sharp drop when compared to the norms of the day, nearly 12 hours in many cases.  It took 10,000 years, but with Ford's announcement, an entirely new work paradigm was ushered in to the industrialized world.

Fast forward nearly a hundred years, and many industries are stuck in this paradigm today.  In spite of the obvious dramatic improvements in the efficiency by which virtually everything is done, people continue to work longer days.  However, in recent years, we've seen a shift toward much more self employment and unconventional work hours, and many feel that the 8 hour work day is finally on its wayout.

As Ray Kurzweil phrases it, all information technology is subject to the "Law of Accelerating Returns."  This means that the pace by which innovation happens tends to increase over time, and the amount of time between each successive innovation naturally decreases.  We are starting to be able to see this today, with "Moore's Law" and other paradigms showcasing this phenomenon, and with what's happening becoming more and more apparent by the day.  While virtually every aspect of our lives will be affected, one that many are naturally concerned with is our employment.

Churning forward into the future

The next paradigm is underway.

As automata, artificial intelligence, and algorithms start to replace more and more human jobs, there has been increasingly more and more leisure time, and less and less work that needs to be done.  The end result is that we've simply been far more productive over the last hundred years, and anyone paying attention to Moore's Law (and the aforementioned Law of Accelerating Returns) will get that immediately.  We are headed toward a four hour work day, and eventually considerably less than that.

Since our jobs are being replaced and automated, this means that what we're going to be left with is our intellectual property.  This still has value, and plenty of it, where manual labor (and even most intellectual labor) no longer has much value worth talking about.  Our intellectual property, on the other hand, is the stuff the algorithms are built upon.  Any time you search for anything on Google, or tag someone's face on Facebook, or thumbs up a song on Pandora, you are, in effect, contributing your intellectual property to the algorithms that drive the artificial intelligence present.  In Jaron Lanier's book, Who Owns the Future, Lanier discusses this concept in detail.  What he proposes is surprising and obvious at the same time:  a future in which we don't get to use services like Google and Facebook for free, per se, but wherein we are paid "nanopayments" for our intellectual contributions to said servers.  Each time we contribute an idea that is eventually used in making a purchase, no matter how far down the line that purchase is, we're paid for the contribution we made to the development of the algorithm or AI or advertisement.

Well worth a read 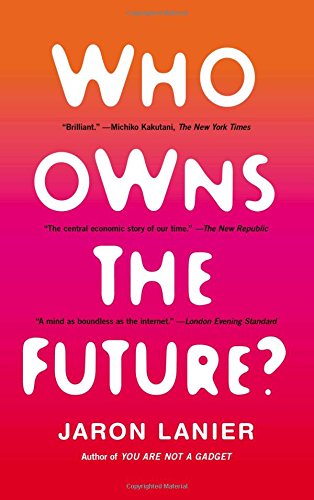 Given that intellectual property has value- as is evidenced by this very site (Infobarrel pays us based on ad revenues),  and given that the world is headed in a direction where it's the only commodity, it's only natural that our play will become work, and vice versa.  If you're playing a video game, you're automatically giving feedback in real time to not only the game's manufacturer, but potentially (with your consent) to the rest of the Internet as well, which is to say the rest of the world (as connectivity becomes a worldwide phenomenon over the course of the next 20 years).

Dining out in a completely connected world will mean that your eating experience will be recorded for posterity, and any unusual pairings of food you come up with may be used to help people decide what to order in the future, or a rating of a restaurant might cause people to choose a different restaurant, or lead them to make their own food at home.  Every single decision and exploration you make could potentially lead to a payday down the road, even if only a minuscule "nanopayment" (as Lanier calls them).  The wealthiest individuals may well be the ones who play the most.