Alexandria Ingham is a full-time writer. She predominantly ghostwrites for private clients on various topics, including technology, business and weight loss. She owns Student Survival Tips, which offers practical tips for students going to, at or just graduating from university. You can find out more about her at her website.
InfoBarrel is a writing platform for non-fiction, reference-based, informative content. Opinions expressed by InfoBarrel writers are their own.
InfoBarrel > Lifestyle > Holidays & Celebrations > Weddings

The History of the Wedding Cake

I recently visited Flambards in Cornwall. It’s a museum and theme park, which takes you through the Victorian era, the Blitz and many other events through history. I visited it because I love history and one part that stood out for me was the Wedding Dresses Through the Eras, which also had wedding cakes through the years. It has inspired me to do more digging into the history of the wedding cake and share my findings.

Throwing the Wedding Cake at the Bride

Wedding cake traditions date back to the Roman Era. Instead of being a cake, a loaf of bread was used. The groom would break the bread over the head of his new wife as a sign that he was dominant in the family. Since society moved on, the tradition and meaning had to move on; now the bride and groom will cut the cake together as a symbol of the first thing they do as a couple and some choose to feed each other some cake to show that they are working together.

The original use for the wedding cake was to throw it at the bride. In the Medieval times, the cake was a fertility symbol and believed to help the couple fall pregnant quickly. Cakes were not stacked in the way that is traditionally seen, in the tiers. Instead, the cakes and other baked goods would be piled up as high as possible. The couple would have to kiss over the pile without knocking it over. If they managed that, they would have a prosperous marriage.

As tiers did become the norm and wedding cakes were eaten, three tiers was the tradition. The bottom tier (the biggest) was used to feed the friends and extended relatives. The second tier was for the close family members and the bridal party. The top tier of the cake was used as the first baby’s christening cake. It was a traditional fruit cake and covered in icing to keep it protected while stored in the pantry. This helped to keep the cost down for the two celebrations.

The Introduction of Wedding Cake Tiers

Wedding cake tiers were introduced in the 1600s, when a French chef visited England. He was appalled at the way the cakes and baked goods would be piled up. As a way to make it look more presentable, he suggested the use of brooms to create tiers. However, this wasn’t followed until much later in history.

Instead, wedding parties moved on from the traditional wedding cake to the “bride pie”. This was often mince or mutton pies or sweet breads that would be baked with a glass ring in the middle. The tradition for the ring was the same as the tradition with the bouquet today – the woman who found the ring would be the best bride. For those families without much money, the pie often became the centrepiece to keep costs to a minimum.

Legend has it that it was William Rich who made wedding cake tiers popular. He was the apprentice of a baker in the 1700s in London and fell in love with the daughter of his boss. To impress her, he built a large cake using St. Bride’s church spire as inspiration. It is difficult to determine how true this story is as there are no surviving records of it.

Make a Beautiful Wedding Cake Yourself

Weddings were nothing big and fancy until the marriage of Queen Victoria to Prince Albert. By 1840, the cost of sugar had decreased and working class families and those on lower wages could have the weddings that the rich had always had. Wedding cakes and dresses were now white and big. For those interested in the history of the wedding dress, England didn’t follow the tradition of the bride being in white until Queen Victoria’s wedding!

Big weddings could not last though. During World War Two rationing meant that some foods were difficult to come by. Most people would only have enough eggs if they had their own chickens and sugar was limited, let along money! Weddings became a much smaller affair, along with the wedding cakes!

Those who married during war time would have had to talk to their friends and relatives about the ingredients. Some would donate their ingredients to make the wedding cake possible. There were other tricks used to help, including using gravy browning so the fruit cake would look richer. Some would even use cardboard cakes with a smaller one on the inside to give the illusion of a grand affair.

The History of Wedding Cake Ingredients

When I got married, our cake was a three tiered one with different flavours of chocolate, chocolate orange and regular sponge cake (we’re not big fans of fruit cake). Different flavours are possible now thanks to refrigeration and getting ingredients is so much easier and cheaper than ever before. However, there are many who will still opt for the traditional fruit cake.

Why was the fruit cake used? The cakes used to be stored in pantries – before and after the wedding! This meant that the ingredients had to have a long life – at least a year, since a baby was expected within the year. The ingredients for fruit cakes could also be easily sourced in Britain. Before sugar was widely available, breads would be used instead. Also, fruit cake is dense and is capable of holding the other tiers, along with any decorations used.

Icing became the norm, especially to help preserve the cake. White icing became popular by 1840 and was a sign of purity. While this remains a popular option, some couples choose to use different colours with food colouring. They can opt for their favourite colours or to match their colour scheme.

From Hortense B. Hewitt 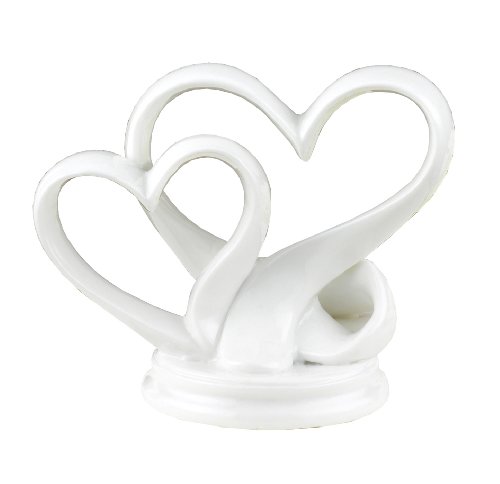 Hortense B. Hewitt Wedding Accessories, Cake Top, Contemporary Double Heart, 4-Inches Tall x 5-Inches Wide Amazon Price: $19.90 $14.88 Buy Now(price as of May 27, 2015)
Opt for a beautiful wedding cake topper for your big day or as a gift for someone special

The traditional wedding cake is no longer the norm. People have moved on to look for other ways to offer their guests a treat and keep the wedding costs to a minimum. Cupcakes have become extremely popular as a way to offer a mixture of flavours and find an easier way to stack them on a stand.

Others opt for more unique options. A friend of mine recently opted for a wedding cookie instead of a cake!

There is more to the wedding cake than you possibly ever thought. It has been used as a symbol of fertility, prosperity and unity. The next time you see a wedding cake – or the new variations of one – think about the history of the wedding cake and the changes it has been through over time.