The White Shepherds are descended from the white-coat bloodlines of the GSD; the earliest known male pure snow-white Shepherd was born in 1879 and called Greiff. His origins are unknown and no information can be found about his parents, however the dog is acknowledged as the foundation of all German Shepherd Dog bloodlines.  In 1887, Greiff is found to have 2 white daughters named Greiffa and Russin. There is no information about breeders of white dogs in this early period.[1]

Greiff is the grandfather of the first German Shepherd that was ever registered, named Horand von Grafrath, on 22 April 1899. The owner of Horand, Rittmeester von Stephanitz,  was the first president of the dog society Verein für Deutsche Schäferhunde (Society for German Shepherd Dogs) and he entered his dog in the organizations breed registry.[3]

In 1906, the first German Shepherd called Mira von Offingen was imported to America to compete at a show in New York but was sent back to Germany without being subscribed in the American pedigree base.

In 1912 the famous German Shepherd breeder, Ann Tracy, imported a GSD, that happened to be the descendent from litter brother to the first German Shepherd, Horand. Ann soon used the dog that she imported for breeding and in 1917, a litter of 4 pure-white puppies were born of which the first born puppy, named Edmund, eventually became the first registered White Shepherd in America. This litter of puppies became the first White Shepherd bloodlines in America. In 1919 the first GSD was registered in the Canadian kennel club however no records of color are noted so it is impossible to know when the first WSD was registered.

Photo of Hektor Linksrhein who was renamed Horand von Grafrath by his new owner Rittmeester von Stephanitz. He was the first registered German Shepherd, circa 1985.[2]

White Shepherd Rejected as a Breed

While the dog breed grew in popularity, in 1959 the White Shepherds entered troubling times. The Verein für Deutsche Schäferhunde (Society for German Shepherd Dogs), abbreviated as SV, officially stated that the white dogs are albino’s and urged advice not to breed with white dogs. A new breeding standard laid out that dogs with more than 50% white and so called albinos were to be disqualified from competition. The new standard was heavily protested however accepted by GSDCA (German Shepherd Dog Club of America). Breeders believed that breeding with the white dogs would make the German Shepherd’s coat lighter and lose its ‘sable’ (yellow-brownish) color. Following the years after the 2nd World War and for nearly two decades, the white dog was often bred with colored GSD's in America. In this period of time roughly 90% of the German Shepherds in America possessed the recessive white gene due to mixed breeding. The white dogs were blamed for color dilution and the fading of the darker colored German Shepherds. This was clearly incorrect as the white dogs had strong black pigmentation on their nose, ears, paws and claws. It was claimed that white dogs had albinism, blindness, deafness, bad temperaments and skin diseases and were causing a detrimental ‘unsoundness’ to the German Shepherd breed.[1] Any genetic disorder of the German Shepherd was blamed on the White Shepherd! In Europe, the same breeding standards were adopted, which effectively eliminated any white puppies from litters from colored parents. In the following years the White Shepherd was almost wiped out in Europe.

The White Dog Grows in Popularity

Meanwhile in Europe the white gene was virtually eradicated and it was very rare to see a white-coated pup. There were occasions when a pup was not slaughtered and survived to become a pet. A new era began in 1967 when an American born WSD called Lobo arrived in Switzerland. The owner imported a second WSD from England named White Lilac and a litter was produced. The Swiss, Kurt Kron, purchased a puppy from the litter of Lobo and Lilac and in 1980, Martin Faustmann bought a pup from the kennel of Kurt Kron.  The white puppy was taken back to Germany and became ‘Champion von Kron’ who went on to have a large number of descendants and the beginnings of European bloodlines. The Swiss club GWS (Gesellschaft Weisse Schäferhunde Schweiz) was founded in 1989 and by 1991 the club was registered into the SKG (Swiss Kennel Club). WSD's are now registered by SKG and accepted at all national shows and dog sports. This was an amazing victory as it meant the breed was on its way to being recognized by the FCI (Fédération Cynologique Internationale). Finally, in November 2002, the FCI officially granted (provisional) recognition to these dogs a - separate breed named Berger Blanc Suisse (White Swiss Shepherd Dog).[1]

Struggle for Acceptance in America and Canada

In 1995 the AWSA (American White Shepherd Association) was founded to promote and protect the White Shepherd breed in US. With the cooperation of the WSCC, the AWSA wrote and published a new breed standard for the white dog. The association petitioned the AKC (American Kennel Club) for full recognition of a unique pure breed, completely separate and independent of the GSD.

In 1999, members of AWSA established the UWSC (United White Shepherd Club) and sought another petition against UKC (United Kennel Club) for a new White Shepherd breed classification within UKC. The petition was a success; the breed was officially recognized by UKC on 14 April 1999. UKC created a new breed conformation standard and registry.[4]

While the bloodlines on either side of the Atlantic have a common genetic heritage with the white-coated GSD they are separated today, by registration of clubs and organizations. Each of these breed clubs have their own breed standards for appearance and temperament and are almost identical in wording. Today neither UKC nor AWSA registered White Shepherds can be registered with European FCI Berger Blanc Suisse (White Swiss Shepherd Dog). [4] 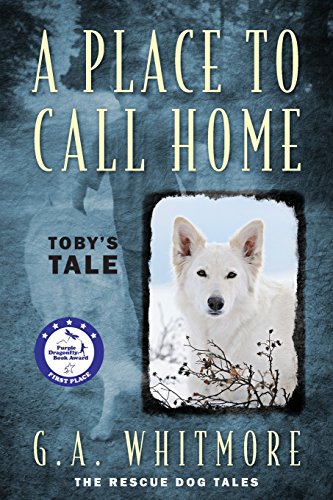 A Place to Call Home: Toby's Tale Amazon Price: $18.95 $11.46 Buy Now(price as of Aug 3, 2015)
Moving tale of a pup searching for his "forever home".
Next >> Fashioning a Reign: 90 Years of Style from the Queen's Wardrobe - Magnificent Exhibition at Buckingham Palace