The Home of a Giant Called Jock O Noth

Scotland's unique vitrified forts are scattered from the Solway Firth up to the central Western Highlands and then across to Aberdeenshire, with a number along the north-west coastline and a few in the Western Islands. They are Iron-Age hilltop constructions, roughly circular in shape with walls ranging in height from 12 to 20 feet (4 to 7 metres) and they usually contain a shallow well, probably used for catching rainwater, in the centre. The walls are made of piled stones; but at some stage the rocks were subjected to intense heat and melted, flowing together to form a glassy, “vitrified' mass. The degree to which the walls are vitrified varies from fort to fort.

The earliest antiquarians to study the forts, in the 18th century, suggested they had been built from volcanic rocks, but this is now known to be incorrect. The walls were fired after they were built. But it is not clear whether the firing was accidental or deliberate.

Many students of the forts are convinced that the walls were intentionally fired, either to strengthen them or to make them impervious to moisture. Only the most deliberate action, they believe, could achieve the searing temperatures - up to 2,000°F (1,000°C) – to which the rocks have, at some time, been exposed. But, they think, the enthusiasm of the builders must occasionally have overreached itself, since sometimes the walls have collapsed.

There has, of course, been speculation that the vitrifying agency was actually some devastating heat ray wielded by alien beings against whom the fort-builders were defenceless. However, this exciting hypothesis has been invalidated by some recent research. 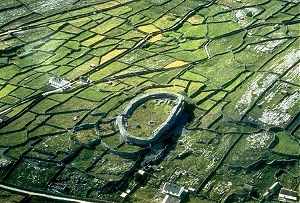 Experiments have convinced Ian Ralston of the Department of Geography, Aberdeen University, that the vitrification of the hill forts is due to destructive acts, although sometimes it could have been accidental. Early in 1980 Mr Rawlston and a team from the university built a section of rampart after the fashion of the Pictish forts – laced together with seasoned timber, on top of a windy hill. He then piled wood against it and set fire to it, keeping the conflagration going for some days. And afterwards he found, in the heart of the wall, vitrified stone. 'The mass of evidence,' he says, 'points to the fact that vitrification was not a constructive process, and that the ramparts were probably fired by enemies, possibly Vikings, many years after they were constructed.'

But this may not be the final answer. Alexander Brown, a potter and kiln builder, has experimented with firing the glacial boulder clay that is found all over Scotland. This vitrifies at a relatively low temperature - around 1,000 F (550 C) - and, says Mr Brown, 'once vitrified, it resembles granite, and it is at least possible that the ancient Picts might use it as a facing material.''

But whatever the answer, one other mystery remains about the strange forts. Exactly similar edifices, of a similar age and built by people at a similar stage of technological advancement, are found in Germany, Scandinavia and Ireland, among other places. Most of them suffered attack during their occupied lives, but none shows traces of vitrification; why is it that Scotland's forts are unique in this way?

If you would like to read further on this fascinating area Ian Rolston has written several books, including Celtic Fortifications and The Archaeology of Britain: An Introduction from Earliest Times to the Twenty-First Century.

Credit: http://www.aberdeenshire.gov.uk/smrpub/shire/detail.aspx?refno=NJ42NE0001
Next >> Undressed A Brief History of Underwear at Victoria and Albert Museum