I am a retired teacher of English as a second language. I teach on line via Skype, and write on-line articles which reflect my love of travel, language, literature, history and culture. I love writing for InfoBarrel. Why not join me by signing up here: http://www.infobarrel.com/signup.php
InfoBarrel is a writing platform for non-fiction, reference-based, informative content. Opinions expressed by InfoBarrel writers are their own.
InfoBarrel > Entertainment > Music

The Irreverent Musical Reverence of "The Book of Mormon"

A musical is generally expected to be lighthearted and entertaining. But The Book of Mormon deals with some of the darkest and most unlikely topics ever tackled in a Broadway musical. Its subject matter includes the history of an evangelical religious movement, African warlords and AIDS, as well as female genital mutilation and child sexual abuse. It also throws in flashing disco balls and four letter words for good measure. But from these unlikely elements it unexpectedly weaves the fabric of a show that is entertaining, thought provoking and even uplifting.

The Book of Mormon comes from the fertile minds of Trey Parker and Matt Stone, co-creators of the award-winning satirical animated television series South Park. The third member of the Mormon creative team is Robert Lopez who has also co-written songs for several Walt Disney productions including Winnie the Pooh and Frozen1.

This musical is one of the longest running shows on Broadway, and its website proudly boasts that it is the winner of nine Tony awards, including best musical1. Since it opened in March 2011 it has performed to sold out audiences in New York, London, Melbourne and on tour, and is credited with bringing a whole new audience to musical theater2.

Elder Price has been trained as a missionary for the Church of Jesus Christ of Latter Day Saints (LDS or Mormons) and is looking forward enthusiastically to his assignment, which he has prayed fervently will be in Disney World, Florida.

Price is sorely disappointed when he is paired with the nerdy Elder Cunningham and the two are sent to a poverty-stricken village in Uganda. But having decided to make the best of it, the clean-cut and somewhat narcissistic young Elder Price eagerly arrives at his assigned village with the insecure Elder Cunningham in tow. However, the pair receive a hostile welcome. The missionaries are shocked by the filth and poverty they encounter, and even more shocked when they are robbed by the local warlord.

The villagers have to deal not only with the local warlord, who shoots people at random and wants to circumcise the village women, but also with with grinding poverty and AIDS. They have heard missionaries before and are not interested in any more preaching. They demonstrate how they cope with their miserable lives with song, singing "Hasa Diga Eebowai",  a parody of The Lion King's "Hakuna Matata" which, rather than being about having no worries, is an obscene curse directed at the Almighty.

Although Elder Price is arrogantly confident of success, his pride takes a fall when his efforts to convert the villagers are a dismal failure. Disillusioned, he deserts his post, leaving the village in the hands of Elder Cunningham.

Cunningham has not actually read the Book of Mormon (the Mormon testament) but sincerely wants to help the villagers and uses his extremely active imagination to make up stories to hold the villagers' attention.

The men of the village believe the only way to cure AIDS is to have sex with a virgin but the virgins are getting younger and younger. In the meantime, the evil warlord is about to make good on his promise to circumcise the village women by the end of the week. Horrified by what is going on, Cunningham tells the villagers some overly-creative stories to protect female babies, encourages the villagers to stand up against the warlord, and even succeeds in making some converts.

Racked by guilt at deserting his mission, Price returns, reaffirms his beliefs and determines to convert the evil warlord.

But Price's attempt to convert the general fails miserably. Things get worse when the leaders of the Ugandan mission arrive in the village. To entertain their honored guests the villagers present the story of Mormon founder Joseph Smith according to Elder Cunningham. The church leaders are horrified by a crude and heretical performance which .tells how Joseph Smith died of dysentry and promotes sex with frogs as a cure for AIDS. Price and Cunningham are ordered home but want to stay and help the people. Although Cunningham has lied, the villagers accept his stories as metaphors and accept Mormonism into their hearts. Many of the villagers become missionaries themselves and even the warlord is converted.

There are those that think that the fertile imagination of the South Park creators is more of a stinking midden than a sweet-smelling garden. One critic has accused The Book of Mormon of being overly hyped and described it as “vile, offensive and potty-mouthed ... and – worst of all - not very funny”4. An LDS journalist wrote that he refused to buy tickets to the show because it satirizes the LDS church's impressive humanitarian work in Africa5.

On the other  hand, BOM has been praised as a clever and nuanced show full of good music and loving, reverent good fun with a fierce, challenging story6. It has also been described as a  "damn funny" show with a "huge helping of heart" which mocks everything from  organized religion and optimistic missionary zeal to the musical theater genre and the absurdities of life7. 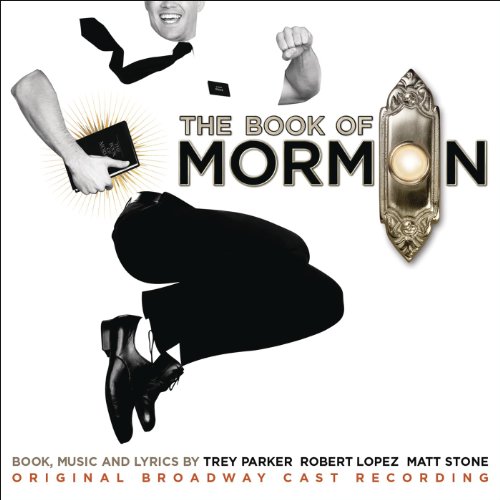 I went to see this show because a friend told me how funny it was. I was not sure what to expect, but found it surprisingly enjoyable.

I enjoyed the music. The song lyrics are biting and clever, and frequently parody musical numbers from other shows. I also enjoyed the contrast between the personalities of Elders Price and Cunningham, and how the egotistical Price gets his comeuppance while the well-intentioned but insecure Cunningham succeeds where his more confident partner fails.

I would definitely not recommend this as a family show due to mature themes and language. However, the swearing is no worse than you find in many movies these days. The use of AIDS, female genital mutilation and child sexual abuse as the subject matter for music and comedy is unexpected and perhaps shocking but I found it refreshing to see a genre that usually deals with fluff dealing with some serious real world issues.

While I expected that this show by the creators of South Park would parody Mormonism, I found it surprisingly respectful of Mormon beliefs. It achieves an interesting balance by informing the audience about the Mormon faith non-judgmentally and portraying the Missionaries as honest and sincere while at the same time satirizing organized religion.

It also contrasts the notion that faith is, by definition, not based on fact with the idea that religious belief can be a powerful force for good. Cunningham lies to the villagers, but he does so sincerely for the very best of motives. At the end of the show we find out that the villagers knew he was lying, but understood that his lies were metaphors for something greater.

I highly recommend The Book of Mormon. It is clever, funny and, yes, even heart-warming.