Mary Virginia Wade, or Jennie Wade as she is often called moved into the house of her sister to help assist with her child during the first day of battle.  The day was July 1st 1863.  It must have been a horrific sight to see, thousands of southerners storming the small town of Gettysburg as the northern soldiers retreated to the heights beyond the city leaving the city to collapse in chaos.

The Battle would rage for three days and Jennie Wade would become the only civilian casualty during the Battle.  For the first two days Jennie and her family continued living normally, in the small house on 528 Baltimore Street.  Jennie assisted her sister in raising her child and doing the household chores, it would be on the third day that she was killed.

Early on the third day of battle, at 8:30 in the morning, a bullet striked Jennie as she was doing chores and killed her instantly.  This left her as the only civilian victim in the town of Gettysburg.

After the battle Jennie was buried and the town was left with thousands of dead bodies to bury in the hot July weather.  It would take years for Gettysburg to recover from the "High Water Mark" of the confederacy.  See this article for more information[1]  following the death blow to the confederacy, the United States would heal but it would take time.  Unfortunately, for Jennie Wade she was destined to remain at 528 Baltimore Street to prepetually haunt the residence.

Ghost Adventurers featuring Zak Bagans, Nick Groff and Aaron Goodwin did an investigation of the Jennie Wade House in Season 4, episode 27.  In the episode Zak Bagans was slapped by a spirit, playfully, but it was still quite disturbing.  The show features the house, the hauntings and attempts to document the ghost of Jennie Wade.  However, you might be asking how can I visit the house?  Well, there are several ways.

The Jennie Wade House is one of the most haunted buildings in Gettysburg, PA.  Travelers should enter at their own risk, but there are several tour groups that offer travelers a chance to visit the house and even participate in lockdowns.  Ghost Tours of Haunted Gettysburg offers visitors a chance to take a Jennie Wade Ghost Tour.  It costs, 10 dollars.[2]  This is one offer a visitor can take to visit the Jennie Wade House.  Internet research may allow you to find other tour groups that do lockdown's, tours, and visits.

What is a lockdown?  A lockdown allows a traveler to spend the entire night in a residence.  In this case if you signed up for one you would be allowed to spend the entire evening in the residence of the Jennie Wade House with a trained paranormal investigator.  You will be given equipment and allowed to conduct your own interrogation with the ghost that haunts the house.

Why should I?  A lockdown provides you with a chance to see the spirit world with your very own eyes.  You can ask the ghost questions with a special recording device and play it back to hear the ghost's answers, you will also have access to night vision, sensors, therma imaging and more.

Is it dangerous?  The question for this is two fold.  Zak Bagans was slapped on the rear by the ghost which we believe to be Jennie Wade, but it was playful.  She seems interested in young men.  I don't believe that you will be harmed by visiting the Jennie Wade House, but you may have a brush with the supernatural and that is the goal of any paranormal investigation.

The map above will allow you to plot your own travel to Gettysburg PA.  It is important to remember that you cannot sleep or book a reservation at the Jennie Wade House, it is a museum today, however like I mentioned there are travel groups like Ghost Tour of Haunted Gettysburg that provides you with the option of touring the residence after night and other groups allow you to participate in lockdowns.  You will need to book your stay at a hotel in Gettysburg and there are several good hotels.  When I visit Gettysburg I usually stay at Comfort Inn Gettysburg or Americas Vest Value Inn Gettysburg.  Both of these locations are well suited to the paranormal investigator.  There are other hotels you can stay at which are haunted, these are smaller bed and breakfast locations, one of the more famous ones is the Cashtown Hotel, but I have yet to stay there.

Some of you who might be reading this do not want to be scared or encounter a ghost.  However, if you are scared of ghosts you should try visiting during the daylight, although you still might encounter a spirit or ghost if you do so.  The Jennie Wade House is a museum today and they allow visitors to come in without booking a reservation or travel ticket which is what most ghost tours do.  You can visit anytime during their operating hours.

The Museum does not openly discuss the hauntings of the Jennie Wade House, but there are several locations around the Museum that do.  There is a Cigar shop across the street and if you ask for the owner he will be sure to show you countless hauntings that he has discovered on film.  I had a chance to speak with him and he is a very pleasant man.  When visiting the musuem you will have a chance to tour from the attic to the cellar and see artifacts uncovered at the house and other areas of the Gettysburg Battlefield.

Other Things to do in Gettysburg

After touring the house you may want to extend your stay and tour the Battlefield.  I captured numerous orbs, and ghosts from the battlefield on camera.  I captured the picture below while walking back from the Jennie Wade House, you can clearly see an orb in the photo.

The Jennie Wade House is one of the most haunted locations in Gettysburg PA.  You will surely see something there that will scare you and one of the ghosts from the location may even reach out and try and touch you, but don't fear they are only spirits. 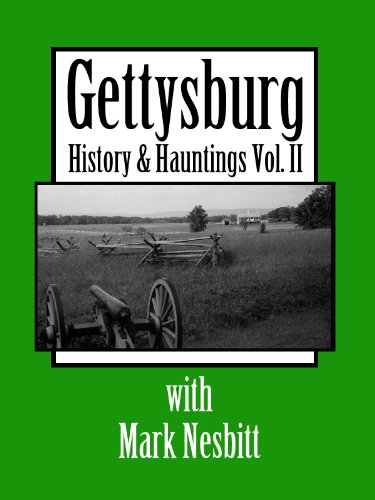