I Â joined Infobarrel as a way of earning extra income between jobs. It takes time to Â learn everything you need to know and build a portfolio but there is no better place to start. Everyone on Infobarrel is incredibly friendly and helpful and will help point you in the right direction.Â  The fun of Infobarrel is you can write about what you want to when you want to.Â If you'd like to make extra money or just enjoy seeing your name in print I'd recommend you toÂ sign up. I love writing for InfoBarrel and write on a variety of topics. You can see my recent articles hereÂ Â http://www.infobarrel.com/Users/andrewagreen
InfoBarrel is a writing platform for non-fiction, reference-based, informative content. Opinions expressed by InfoBarrel writers are their own.
InfoBarrel > Sports > Soccer

The Magic of the Manchester United Seven Shirt

It's hard to think of a more prestigious football shirt than the red number seven shirt of Manchester United.  Just listing the players who have worn it over six incredible decades is enough to conjure some of the magic: George Best, Bryan Robson, Eric Cantona, David Beckham, Cristiano Ronaldo and Michael Owen.

But the romance of the United seven shirt begins with George Best. 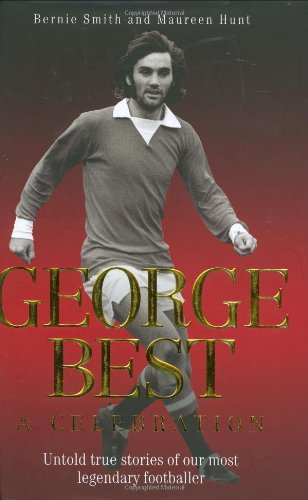 Georgie Best was the epitome of everything the Manchester United seven football shirt stands for. The mercurial United and Northern Ireland winger was arguably the best British footballer ever. With his Beatle haircut, good looks, trendy dress sense and winning way with women he was football's first real celebrity sometimes referred to as the fifth Beatle. He would return from United overseas trips to be greeted by crowds of screaming women. His errant ways and losing battle with the bottle only added to the legend. There is a sadness about the way it all ended but it is hard to think of the little Irishman and not smile. Best had it all.

George Best was born in Belfast and signed by United at the age of 15.  Homesick for his native Ireland he almost returned home but cherished by United manager Matt Busby (later Sir Matt) he persevered and made his United debut at 17. He scored 179 goals for United from 470 appearances over 11 years but it was the manner of his goals and the way he played that endeared George Best to the fans. Shirt outside his shorts, the ball seemingly glued to his feet, he would weave and sway downfield beating opposition players for fun.  George liked to dribble the ball into the goal and did so again and again.

He will be best remembered for the emotional night at Wembley in 1968 when he helped United to their first European Cup Victory. Ten years on from the Munich air disaster that killed seven of United's young team it was an emotional night for Sir Matt and Manchester United. Grown men cried that day. Georgie Best was European footballer of the year in 1968 and the Football Writers Association player of the year. He played 37 times for Northern Ireland scoring 9 goals but the national teams lack of success meant George Best was never given the international stage his talents deserved.

He should have had many more great years in him but his behaviour became increasingly erratic. He would disappear for days on end re-appearing at the heart of a media scrum. The effects of his extravagant lifestyle became increasingly apparent as did his struggles with alcoholism. He quit United unexpectedly in 1974 at the age of 27.  He played for short spells with several other clubs, including a spell in the United States and finally retired in 1984 aged 37 but he was never the same player again. I saw him play for Fulham in a team that included Rodney Marsh and Bobby Moore.  The skill was still  there but the fitness was lacking. It was huge fun though. George loved the game and played it like a big kid.

After he retired he told a story about himself. He was in a hotel room, in bed with a former Miss World drinking champagne. He called room service. The hotel porter came in, took the scene in and said, "Where did it all go wrong George?"

He used to say, "I spent 90% of my money on women, drink and fast cars. The rest I wasted.

The joke as George saw it was he was enjoying life so where had he gone wrong? The answer sadly came in a descent into alcoholism that stripped him of his dignity and finally killed him. George Best died in November 2005 aged 59. He did go wrong but he did it with a smile and we couldn't help loving him.

United signed Bryan Robson from West Bromwich Albion in 1981 for a then record fee of £1.5 million. If Best was a charming but wayward genius the next great player to wear the United seven shirt, Bryan Robson could not have been more different. If Best was flamboyant Robson was dependable. The longest serving captain in United's history Bryan Robson captained the team to three FA Cup final victories and a European Cup Winners Cup triumph as well as winning two Premier League titles with the club.

Bryan Robson played 90 times for England and captained the international side 65 times scoring 65 goals. A solid midfield general rather than a winger Robson was the complete all round player ; a combative tackler with brilliant anticipation who got his fair share of goals too. He played 461 games for Manchester United scoring 99 goals. 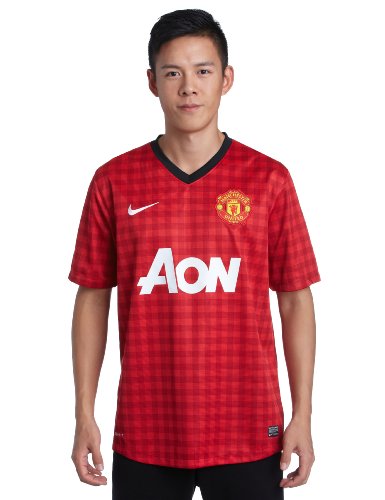 If Best was charming but wayward the next great player to wear the United Seven shirt, Eric Cantona was enigmatic, a flawed individual but a footballing genius and possibly United's most influential player ever. The Frenchman joined United in 1992-93 having helped Leeds win the old First Division in the previous season. He turned United's season around. helping them to win the inaugural Premier League by ten clear points. King Eric as the fans dubbed him helped United to 4 Premier League titles in 5 years including two league and FA Cup doubles.

The flawed side of Eric was his temperament and his disciplinary record. He had come to England to re-launch his career following a lengthy ban in France where he had insulted each member of the disciplinary panel in person. The most notorious incident involving Eric occurred in 1994-95 when , ejected for kicking out at a player who had pulled his shirt he launched into the crowd with a kung fu style kick on a Crystal Palace fan who had insulted him. He escaped the 2 week sentence he was originally sentenced to but had to do 120 hours community service and was suspended for the final four months of the season. The incident prompted Eric Cantona's most famous quote. Pursued by journalists he said, "When the seagulls follow the trawler it is because they think sardines will be thrown into the sea." For all his faults Eric was a footballing genius and has been voted the most influential United player of all time. 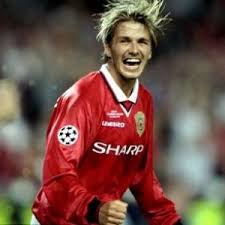 Beckham first came came to public prominence in 1996 scoring a spectacular goal from the half way line against Wimbledon. He was a hate figure for a while following a sending off against Argentina in the 1982 World Cup which saw England eliminated. Effigies of Beckham were burned and he was booed and whistled at every away ground he visited. It is a tribute to his resilience and charm that he rehabilitated himself and went on to become a model professional and an ambassador for his country associated most recently with London's successful bid for the 2012 Olympics.

Beckham's most famous game for United was probably the 1999 Champions League final in which United remarkably came from a goal down to beat Bayern Munich 2-1 in injury time. Both goals were scored from David Beckham corners. Beckham married Spice Girl Victoria Beckham and his celebrity lifestyle eventually led to a falling out with manager Alex Ferguson and a transfer to Real Madrid. Beckham subsequently forged a new career for himself with LA Galaxy in the United States but remains a fiercely proud Englishman and has stated a wish to play for Great Britain in the 2012 Olympic tournament. 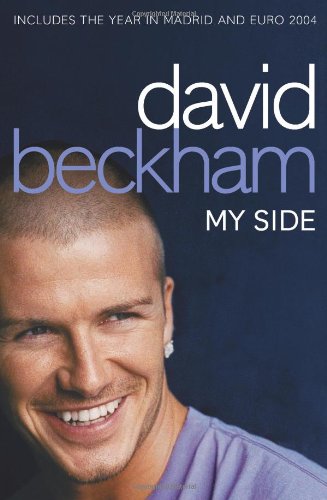 If the United sevens that had gone before him were a hard act to follow the Portuguese magician Cristiano Ronaldo was the man for the job. When United Manager Alex Ferguson signed the 18 year old Ronaldo for £12.24 million in 2003 the player requested the no.28 shirt as he did not want the pressure of living up to the pressure of a shirt that had been worn by the likes of Best and Cantona.

"After I joined, the manager asked me what number I'd like. I said 28. But Ferguson said 'No, you're going to have No. 7,' and the famous shirt was an extra source of motivation. I was forced to live up to such an honour."

He needn’t have worried, finally persuaded to take the precious seven shirt he was so successful at United that ,when he finally left for Real Madrid, it was in an £80 million ($131,6M) transfer deal. That made him the most expensive footballer in history

Ronaldo made an immediate impact with a stunning 30 minute contribution in his debut against Bolton. He scored 8 goals in 39 appearances that season, including the opening goal in United’s FA Cup final victory. He ended the season as  the club’s player of the season. He was to become famous for his step-overs, his weaving runs and truly amazing free-kicks.

He was controversially involved in club mate Wayne Rooney’s sending off when Portugal met England in the 2006 World Cup and this, together with his reputation for falling over meant he was not as universally popular as his silky skills should have made him.

He played an outstanding role in United’s 2006-7 Premier League success scoring vital goals and many assists for Wayne Rooney who didn’t seem to hold the World Cup against him. 2007-8 was better still. Cristiano scored an amazing 42 goals in all competitions; especially amazing for a winger. His goals haul included an effort that helped United clinch the European Champions League and a penalty that secured a second successive league title. At the end of the season Cristiano was voted FIFA’s player of the year. In 2007-8 he helped United to a third successive Premier League title and their second successive European final.

Perhaps the last word should go to Alex Ferguson, "I have nothing but praise for the boy. He is easily the best player in the world. He is better than Kaka and better than Messi. He is streets ahead of them all. His contribution as a goal threat is unbelievable. His stats are incredible. Strikes at goal, attempts on goal, raids into the penalty box, headers. It is all there. Absolutely astounding." Sir Alex Ferguson, July 2009.

Michael Owen a great player with Liverpool but past his best and beset with injuries during his time at United, was succeeded by Antonio Valencia[1] who.......... the story continues!!!