I'm the man who's gonna be King of the Writers!
InfoBarrel is a writing platform for non-fiction, reference-based, informative content. Opinions expressed by InfoBarrel writers are their own.
InfoBarrel > Entertainment > Games

Who here has played Cards Against Humanity? Not enough.

For those of you not in the know, the rules are simple. There are black question cards and white answer cards. One person holds a black question card and reads the question on it. This person is known as the Card Czar. The other players choose from their hand a white answer card that they feel is the funniest response. They give their white cards to the player holding the black one, who chooses his or her favorite. The winner gets that black card from the Card Czar as a trophy and a new player is named the Card Czar for the next round. The person who earns the most black cards as trophies is the winner.

Unless you are a complete prude who gets offended by the content of your average Sesame Street episode, you are guaranteed to love this game. It brings out the dark side of everyone in the most inoffensive, non-threatening way ever. I've never seen a Cards Against Humanity game that didn't have people rolling with laughter. The funniest Cards Against Humanity examples will always put a smile on someone's face, even if it means that person will feel dirty afterwards. Heck, that dirty feeling is part of the fun. Dark humor is the name of the game.

Some phrases will make you feel dirtier than others.

The last time I played, I learned that Moses brought down a plague of hipsters onto Egypt and the “web of lies” answer card was somehow being drawn way too many times. I also learned that other people are way funnier than I am, as I only won one hand.

So who are the brilliant and psychotic minds behind Cards Against Humanity?

Cards Against Humanity has a very humble history, starting with eight people creating a simple question-and-answer game. While playing the game amongst themselves was fun, they decided to monetize it by placing their questions and answers onto playing cards. Their simple idea turned into a Kickstarter campaign where people donated more than three times the amount they were looking for. And thus, Cards Against Humanity history was made.

What makes Cards Against Humanity LLC such a strong business is that they do not accept investors and they don't sell to retail outlets. Their product is sold via online distribution, and the lack of investors or retailers means that they don't have to satisfy anyone but their raunchy, raunchy customers. Family-friendly gaming companies won't be cutting into their competition either. And their dominance in a market that has such apparent high demand has meant pure profit for them; their various expansion packs have sold out within days of being released.

Trust me when I say that you should make sure you get a chance to play this game at the next party you're at. Grab a group of people you'd feel comfortable making a Holocaust joke in front and you'll have the most offensively fun time you've ever had. 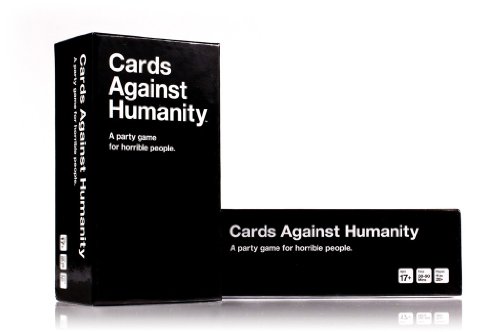 Cards Against Humanity Amazon Price: $25.00 Buy Now(price as of May 1, 2015)
You will not regret this purchase. The replay value of this game is nearly infinite when you factor in the numerous expansion packs.
Next >> No Man's Sky - How to Efficiently Farm Money