The Munsters is a sitcom that first aired in the 1960s.  Every week millions  would tune in to watch the adventures of Herman and other family members.  They lived at the appropriately named 1313 Mockingbird Lane.    Most of the 60s sitcoms featured satire, slapstick or  fantasy.

The Munsters had quite an impact on pop culture. The program became more popular in later years when it appeared in reruns.  At the time of its initial run the ratings were only average.

It only lasted two seasons, as a similar show called the Addams Family that ran during the same time period  was more successful.   Many Munster costumes, dolls, and other items are still available today.  Munsters costumes remain  popular at Halloween.  Everyone seems to know who Herman is.

I thought the Munsters opening theme that was used in season one was one of the best TV themes ever.  In the second season the theme was changed somewhat  to make it more jazzy.  I preferred the original opening with the organ music.

One of the funniest aspects of the show was how seemingly "normal" they thought they were.  Herman, Lily and Grandpa thought that everyone else was strange. The Munsters was slapstick at its best and good old fashioned comedy anyone could enjoy. I hope you enjoy this trip down memory lane.

Lily and her niece Marilyn

Lily  was a stay at home mom.  On two occasions she briefly held down a job.  One hilarious episode featured Lily working as a hairdresser. Lily assumed everyone would want to look like her, and the results were very funny.  Customers literally  ran screaming out of the beauty parlor once they saw what she had done.  Lily could never understand why they didn't appreciate their new look.

Another time Lily took a temporary job to earn money for a birthday present for Herman.  She and Herman ended up working in the same place without either one realizing it.

She always slept holding a lily in her hands.  Lily was frequently frustrated with Herman and usually was the smarter of the two. She often acted as peacemaker between Herman and Grandpa  as they frequently got into fights and into trouble with their outlandish schemes.

Marilyn was first played by Beverly Owen, and later Pat Priest.  Both women looked quite a bit alike, so the transition from one actress to the other was easy for viewers to accept.

Lily felt sorry for Marilyn because she believed her niece was very homely looking.

She wasn't the only one who believed that as the other family members felt the same way. Of course, Marilyn was actually very pretty and the only "normal" one of the family. Even Marilyn herself didn't realize this.

Marilyn went on dates and brought her boyfriends home to meet the family.  The men were always frightened  at the sight of Herman, Lily and Grandpa and almost always left as fast as they could.

Marilyn thought it was because of something she did.  She thought she was a lousy date.  It never once occurred to her that maybe the men were running from the rest of the Munster family.  Often Lily and Herman would commiserate about their niece and how difficult they thought life would be for her because of her appearance.

The Munsters Original Theme From Season One

Herman Munster was the Man of the House

Herman could best be described as a silly and childish buffoon.  However, Herman was also kind hearted and mostly good natured. He did have a childish streak though,and it showed from time to time.  Herman would have a tantrum if he didn't get his way or if something really upset him. His wife Lily often had to calm him down.

Herman could never resist a get rich quick scheme.  He  often plotted with his father in law on ridiculous ideas that always backfired on them. This would usually end in fights and the two men would refuse to speak to each other.  Eventually Lily got them to forgive each other.

Herman and Grandpa actually liked each other a lot, despite their frequent arguments. Fred Gwynne, who played Herman, said he loved the character.   He was hopelessly typecast as a result of the show.

When the program ended he found it hard to obtain other roles.  He was just too identified as Herman Munster. He also had to endure wearing 40 or so pounds of padding and large elevator shoes. This was no easy task. Gwynne took it in stride and never complained about it.

Grandpa Munster was Lily's father.  Al Lewis played the part, and he had a blast doing it.  Al loved talking about Grandpa and was willing to be in character even years after the show ended.

Grandpa spent a lot of time in a laboratory in the basement of the house, inventing various potions and magic spells.  More often than not he had Herman as an accomplice. They thought they were going to strike it rich but of course it never happened.

Grandpa's inventions almost always backfired.  There were times when Grandpa intentionally turned himself or someone else into a bat, wolf, or other creature.  However, most of the results were due to errors  he made and not deliberate.

Nevertheless, he never gave up, and Herman was right there with him plotting the next scheme that would make them rich.

The Munster boy was named Eddie and played by Butch Patrick.  He had appeared in several sitcoms before the Munsters and again after the program ended.  However, Patrick's acting career ended when he became an adult.

Eddie was known for sleeping in a coffin, and going almost everywhere with his werewolf toy. He also had a pet named Spot who lived underneath the stairs.

Eddie was actually a werewolf.  He thought he was very normal and everyone else was different, just as his parents did.  Eddie did have school buddies and was very sociable.  In fact some of his friends enjoyed meeting Herman and the rest of the family.  It was adults who were afraid of the Munsters.

All of the Munsters cast members enjoyed being on the show and had fond memories of it after the series ended.  The show included guest stars who were well known at the time, such as Harvey Korman, Paul Lynde and many others.

It is hard to believe, but Butch Patrick is now in his 60s.    Beverly Owen and Pat Priest are both in their 70s.

All images in this article are in the Public Domain. 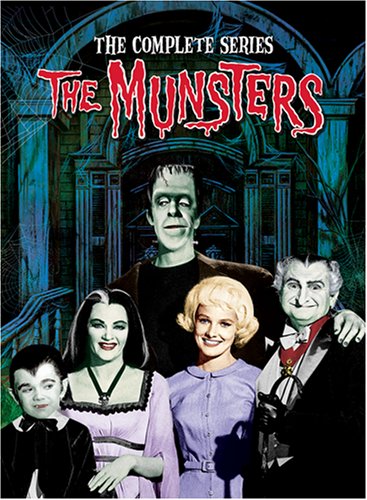 The Munsters: The Complete Series Amazon Price: $69.98 $32.35 Buy Now(price as of Aug 9, 2015)
All of season one and two are featured in this set along with some special features.
Next >> Lifetime Cable Channel Releases Yet Another Tell-All About Marilyn Monroe