The Mystery of the Islander - Alaska's Ship of Gold

More Than $250 Million in Gold on the SS Islander?

Until the Islander is salvaged from the icy waters of the Lynn Canal, in

Credit: Wikipediaer know how much gold is buried in the holds of the ship.

There is no doubt, however the ship was a carrying significant amount.

The Islander was a favorite of politicians, businessmen, bankers, gold miners and the upper crust of Klondike society.

Some estimate the amount of gold on board at five tonnes worth over $6,000,000 in 1901.  Early newspaper reports speculated that there was more than $3,000, 000 in gold loaded in the port of Skagway.  It's one of many discrepancies in the story of the S.S. Islander.

The 240 foot ship was one of the most luxurious operating between Skagway, Alaska and Victoria. BC during the height of the gold rush.

The Sinking of The S.S. Islander

Not only was the islander one of the most stately ships in the Canadian Pacific fleet it was constructed of airtight compartments, and considered to be "unsinkable".     Very early in the morning of August 15th, 1901 the Islander was on it's way down the Lynn Canal in southeast Alaska when it hit an uncharted rock on an iceberg and began to take on water.      It only took the vessel twenty minutes to sink, but remarkably most of the 180 on board were able to get into rowboats and make it to nearby Douglas Island.    It's unclear exactly how many people perished in the wreck. An inquiry found 40 people were unaccounted for but the number may be higher, because the ship's passenger manifest may not have been complete.

The fact that so many did survive is a miracle in itself.  At first the crew was cited as acting honorably and courageously, but a later inquiry painted a different picture.

Testimony from the survivors told stories of eight or nine crew members leaving in lifeboats that were designed to carry thirty or forty passengers.

It took twenty years to pinpoint  the exact location of the ship. At more than 300 feet it was too deep to be reached by the ocean technology of the day.     In 1934 the first major salvage attempt took place. Using cables placed under the Islander during low tide, the ship was slowly dragged toward shore.       Unfortunately, not all the of the vessel made it to shore. Only about 60 feet of the Islander was recovered and salvagers were extremely  disappointed with what they found.      They never fully released the results of their efforts but it is estimated that the companies involved spent $200,000 and only found between $50,000 and $75,000 in gold or other valuables.

The Battle for The Islander

For more than a decade the battle over the salvage rights to the Islander was fought in a court of law. In 1996 OceanMar inc, based in Seattle arrived on the scene of the wreck but was served with a temporary restraining order. Another Seattle company Yukon Recovery was also laying claim to the S.S. Islander's salvage rights.

An Anchorage judge gave OceanMar the rights to search for the remnants of the ship, with the condition that nothing could be touched or removed.

In 1996, ninety-five years to the day she sank, the Islander's bow was located.

Four years later, after a prolonged legal battle with Yukon Recovery, OceanMar was finally awarded salvage rights.  Part of the reason OceanMar was successful in court is because the salvage company had entered into an agreement to repay 25% of whatever was found to London based insurance firms that had settled the original claims.

Yukon Recovery appealed the decision and lost the appeal. In 2012, OceanMar announced it was preparing a plan to remove the Islander's sunken treasure.

It's unclear when or how the next salvage attempt will take place. Some news reports suggest OceanMar will have to raise between $3 -$4 million for the project. Others put the price tag between $20 - $30 million.

And of course there is still another possible twist in the more than century old saga of the S.S. Islander.

There is a theory that when the original salvage effort took place, splitting the ship, that the cargo hold may have been irreparably damaged and that the boxes of gold nuggets may have split open and found a permanent burial ground on the icy floor of the Lynn Canal.

Regardless of the outcome, the S.S. Islander remains one of the world's most intriguing tales of sunken treasure. 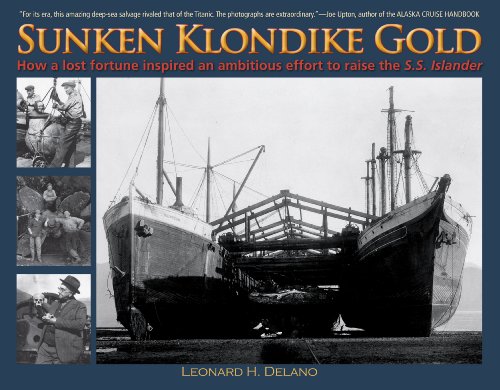 Sunken Klondike Gold: How a Lost Fortune Inspired an Ambitious Effort to Raise the S.S. Islander Amazon Price: $24.95 Buy Now(price as of Sep 3, 2016)
A beautifully written and well researched book with lots of fascinating pictures.
Next >> Fashioning a Reign: 90 Years of Style from the Queen's Wardrobe - Magnificent Exhibition at Buckingham Palace